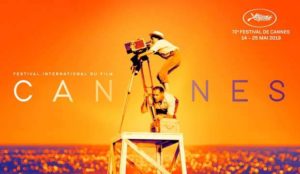 The 72nd edition of the Cannes Film Festival has kicked off as of the 14th May and concludes on Saturday 25th May, 2019.  There’s quite an interesting lineup in the Main Competition section this year which includes some previous winners of the coveted Palme d’Or.  The jury for the Main Competition is headed up by Mexican filmmaker Alejandro Gonzalez Inarritu (Birdman, The Revenant) and he is joined on the panel by the likes of Polish director Pawel Pawlikowski, American actress Elle Fanning and Greek writer/director Yorgos Lanthimos.  The official selection for the Main Competition consists of a total of 21 films and they hail from countries such as China, Italy, France, Spain, Brazil, South Korea and the United States.  Of especial note among the main competitors are entries from previous winners of the Palme d’Or: Quentin Tarantino (Pulp Fiction), Terrence Malick (The Tree of Life), Abdellatif Kechiche (Blue Is the Warmest Colour), Ken Loach (The Wind That Shakes the Barley and I, Daniel Blake) and the Dardenne Brothers (Rosetta and L’Enfant).  Also appearing on the shortlist is the latest offering from Spanish director Pedro Almodovar (Pain and Glory); despite previous wins in other categories at Cannes, Almodovar – to date – has never landed the Palme d’Or.  The opening film of this year’s festival meantime is Jim Jarmusch’s The Dead Don’t Die which is also in competition. 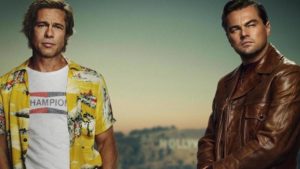 It’s nigh impossible to pick a winner in the main competition and I’ve often compared it to laying a bet on the Grand National, but perhaps Tarantino’s Once Upon a Time in Hollywood (pictured above) is one to watch out for.  Set in 1969 Los Angeles, the director’s latest yarn concerns a B-list television actor (Leonardo DiCaprio) and his stunt double (Brad Pitt) as they navigate their way around the American film-making industry of the very late 1960s.  Margot Robbie is cast as the tragic Sharon Tate and Al Pacino features as DiCaprio’s agent.  Others of note who pop up in the large cast include Dakota Fanning (Elle’s sister), Damian Lewis, Bruce Dern, Timothy Olyphant and the late Luke Perry (in his final film role).  So why am I tipping this one?  Well, for the very simple reason that Cannes has honoured films about film-making in the past (think 1991’s Barton Fink – which won the Palme d’Or – and 1992’s The Player – which won Best Director for Robert Altman).  I wouldn’t discount Almodovar’s film either in terms of his never having won the top award, but after that it’s really anyone’s guess.  Other films which debut during the 12-day duration of the festival include the Elton John biopic Rocketman and Asif Kapadia’s latest documentary which concerns one Diego Maradona.  The official poster for the festival pays homage to director Agnes Varda who passed away in March of this year (that’s her on the said poster directing her first film La Pointe Courte).  A very nice touch indeed from the good people of Cannes and it’s refreshing that the organisers can bring a touch of class to the proceedings.  Bon chance to all those in competition.