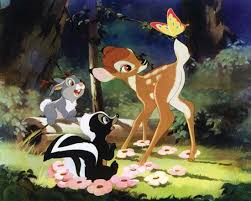 Walt Disney’s fifth animated feature film Bambi celebrates its 75th anniversary in August 2017 and we look back fondly on one of the studio’s most beloved creations.  Based on the book Bambi, a Life in the Woods by Austrian writer Felix Salten, Bambi tells the story of its titular character and his coming of age in the forest.  It is notable for many distinct elements including its peerless animation, its message of pure existence and nature conservation and, of course, one of cinema’s most famous off-screen deaths and villains.  The film’s opening sequence sets the tone perfectly as various creatures in the forest, including the scene-stealing Thumper, are introduced.  There are no human characters in Bambi, but the animals are imbued with their own individual personalities and quirks.  Friend Owl – as he is called by the others – is awoken as a commotion takes place surrounding the birth of the white-tailed deer.  ‘The new prince is born,’ he is informed as the animals hurry along to see the forest’s new-arrival.  ‘Kind of wobbly, isn’t he?’ the plain-spoken Thumper remarks as Bambi attempts to get up.  When Bambi’s mother takes her young son out walking the very next day, Thumper has more to say about the young deer in keeping with the film’s initial light tone – ‘He doesn’t walk very good, does he?’  Once again the young rabbit, with a penchant for thumping his left hind foot, is reprimanded somewhat by his mother.  Life lessons are a theme of Bambi as this is primarily a story about growing up. 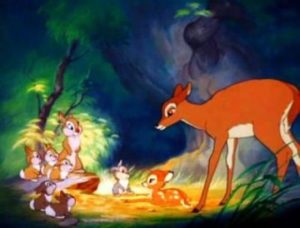 Deer had previously appeared in Disney’s seminal 1937 Snow White and the Seven Dwarfs, but the film producer and pioneer wanted the animals in Bambi to be more realistic and expressive.  To this end, he encouraged his team of animators to visit Los Angeles Zoo and he also arranged for a miniature zoo to be set up on the studio itself; appropriately enough, a pair of fawns were among the animals.  The final design of Bambi himself incorporates a realistic depiction of a young deer’s anatomy combined with an exaggeration of the character’s face to render his features baby-like and, consequently, more endearing.  The backgrounds for the film were inspired by the Eastern American woodlands; states such as Vermont and Maine.  Indeed, one of Bambi’s most striking early sequences is the young deer’s first experience of rain.  The wonderful tune of Little April Shower accompanies this, but the tone shifts markedly and becomes vaguely nightmarish as some lightning occurs.  It’s not the last time that such a spine-chilling quality arises in the 70-minute-long film. 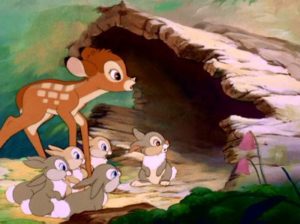 Some time passes and Bambi’s mother takes him to the much-referenced meadow.  Eager to see this wonderful place, Bambi runs out into the lush pasture and is duly cautioned by his parent – ‘You must never rush out on the meadow, there might be danger.’  An idyllic existence seems inevitable as Bambi meets Faline – a young female deer – for the first time and catches a glimpse of the Great Prince of the Forest.  But a foreboding tone is again struck as the Great Prince senses impending danger and returns to the meadow to warn the other deer.  Shepherded to safety by the regal stag, Bambi enquires of his mother as to what was the source of this peril.  ‘Man was in the forest,’ she replies in one of the most famous lines in animated movies. 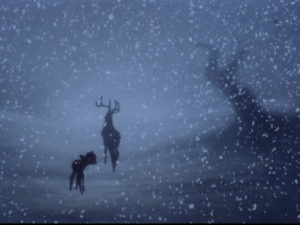 Disney had originally purchased the film rights to Salten’s book as early as April 1937 and intended it to be the studio’s second animated feature.  Intended for an adult audience, the original novel was quite somber in mood and was deemed just a little too grim for the producer who was well aware of what the cinema-going public desired.  Some critics have knocked the resulting picture (which got sidelined for a number of years as Pinocchio, Fantasia and Dumbo all preceded it) as being the first in a long line of anthropomorphic animal movies from the studio, but I would point to some of the darker and quite naturalistic elements which Bambi embraces.  The harshness of this life in the wild is unmistakable as winter arrives and the young deer comments on his prevailing hunger – ‘Winter sure is long.’  A feeling of buoyancy is temporarily restored in the form of green shoots appearing in the meadow, but what accompanies this is the film’s most famous and distressing moment.  ‘Don’t look back!  Keep running!’ Bambi’s mother implores of him as she hears a familiar sound and senses an ominous presence.  A single gun shot is heard and we realise only too well what fate has befallen her.  As the snow begins to fall again, the distraught Bambi encounters the Great Prince of the Forest – ‘Your mother can’t be with you anymore,’ he solemnly tells him in a euphemistic way without ever mentioning the dreaded word itself.  Of significance also is the fact that he addresses the young one as ‘my son’ for the very first time.  Crestfallen, Bambi departs with his father as a new life and adolescence beckon. 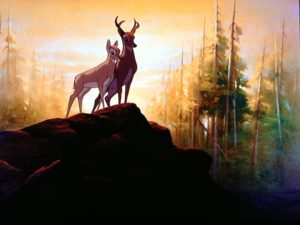 The passage of time is conveyed by Friend Owl’s reaction as he meets Bambi again during the springtime (how much time has exactly elapsed is left unspecified) – ‘I see you’ve traded in your spots for a pair of antlers.’  The nocturnal bird of prey warns the matured deer of ‘twitterpation’ given the time of year and the proclivity for ones as young as Bambi to become attracted and romantically involved.  One of the film’s most humourous sequences ensues as the young adults Bambi, Thumper and their friend Flower (the striped skunk) determine themselves not to become twitterpated.  Thumper and Flower soon abandon this project as they meet their female counterparts; Bambi too falls under the spell of Faline whom he has not seen for many months.  But the course of true love is not quite direct or certain as Bambi is forced to face down an opponent for the doe’s affections.  Bambi is triumphant in the contest, but must surmount another rite of passage as he rescues Faline from a pack of vicious dogs.  The unwelcome and invasive influence of man rears its head one more time in the climactic camp fire which threatens to ravage the entire forest.  An injured Bambi (a gunshot wound) is told to get up by the Great Prince.  The two of them make it to safety, like so many of the other animals, and Bambi is reunited with Faline.  The film’s final sequence mirrors its first as Thumper and his young offspring wake Friend Owl up with the news of the birth of Bambi’s two children.  Bambi closes with a shot of its central character standing aloft on a mountain top with the Great Prince who, significantly, departs leaving the new prince to enjoy the view.  It’s a fitting finale and one in keeping with the theme of coming-of-age.  Bambi is now the master of his domain; a beacon of hope and inspiration to the other inhabitants of the forest. 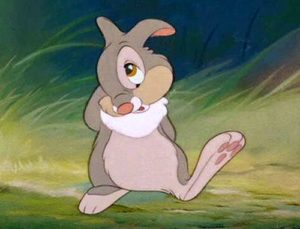 Released by RKO Radio Pictures on the 13th August, 1942, Bambi was not a commercial success in its day.  America as a nation was at war and the film was met with a somewhat lukewarm reception by critics who objected to its lack of fantasy and the marked emphasis on animals striving to survive and avoid the threat which human contact entailed.  It’s possible that this latter aspect of the film was just a little too redolent of America’s policy of isolation prior to the events of Pearl Harbor, but, in any case, Bambi was not properly appreciated until many years after its initial run.  Its place in the canon of great Walt Disney films has long since been secured and in 2008 the American Film Institute voted it the third greatest animated film of all time (Snow White and the Seven Dwarfs and Pinocchio, incidentally, occupy the top two places).  The quality of the animation is unforgettable and still resonant even today, notwithstanding the technical advances which have been made in this field.  Kudos to supervising director David Hand (who also oversaw Snow White) and a particularly memorable score by Frank Churchill and Edward H. Plumb.  The two composers were nominated for an Academy Award for Best Dramatic Score and Churchill (who died at the tragic young age of 40 in 1942) also received a nomination for Best Original Song (Love is a Song) along with Larry Morey.  Bambi also received an Oscar nomination in the category of Best Sound.  The three-note theme for man – as he intrudes into the forest and Bambi’s world – has been compared to that of John William’s similarly minimalist composition for the shark in Jaws.  It’s of no small interest also to note that the character of man, as presented in the film, ranks as number 20 on the American Film Institute’s list of cinematic villains.  The shark – nicknamed as ‘Bruce’ – from Spielberg’s 1975 classic is placed just two positions above this character at number 18.  Disney himself was even reproached by his own daughter who complained that the death of Bambi’s mother was not necessary.  The world-famous producer countered with the argument that he was merely following the narrative trajectory of Salten’s original book.  It’s still an incredibly melancholic moment some 75 years later and has lost none of its impact.  Time, fortunately, has been kind to Bambi in the interim and it’s an animated classic which can and should be revisited time and again.  Magical and deservedly celebrated.