Movie Retrospective: A Month in the Country 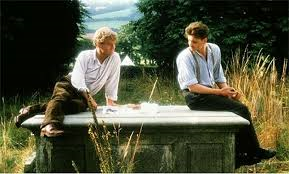 Pat O’Connor’s 1987 adaptation of the novel of the same name by J.L. Carr seems a timely film to re-appreciate as centenary commemorations of the Great War continue across Europe.  First published in 1980, the fifth novel by Carr is a reflection on lives following the war and the process of healing in the wake of its traumatic events.  Carr himself was born two years prior to the outbreak of hostilities in Europe.  He based the story on events in his own life and on characters he knew and in this regard it is worth noting the fact that he served as an RAF photographer and intelligence officer during World War II.  Hence some of the interest in images which rests at the heart of A Month in the Country.  That and the various permutations that may lie beneath them.

Irish director Pat O’Connor’s (Cal and Fools of Fortune) screen version is a very faithful realisation of Carr’s work.  Set in rural Yorkshire during the summer of 1920, the film opens with a short flashback scene of the war itself and then skips forward to the present action.  Tom Birkin (Colin Firth), a survivor of the trenches, has been employed to carry out restoration work on a medieval mural discovered under layers of whitewash in a small church in Oxgodby.  He is still suffering acutely from the horrors of war, has constant nightmares, and has developed a stammer.  Upon arrival at his place of employment, Birkin discovers that the local vicar (Patrick Malahide) has ulterior financial reasons for having the mural uncovered and considers that it may even become a distraction for his congregation.  With little or no money himself, Birkin opts to sleep in the church belfry.  Beginning the painstaking work at hand he soon befriends an archaeologist named James Moon (Kenneth Branagh) who is working to locate a grave just outside the church grounds.  Like Birkin, Moon is also a war veteran who has distinct memories of his experiences on the front. 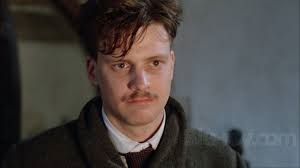 This was Firth’s first starring role and also represented an early appearance for Branagh.  Both men were in their mid-twenties during the shoot and are joined in the cast by the aforementioned Malahide, Jim Carter, Richard Vernon and Natasha Richardson as the vicar’s wife Alice with whom Birkin forms an attachment.  Birkin also becomes friendly with the children of Mr. Ellerbeck (Carter), the local station master, who preaches in the nearby Methodist church.  Birkin dines with the family on Sundays and is eventually persuaded by the girl and boy to address the Methodist congregation himself, which he does by explaining the work he is carrying out.

In an early exchange in the film, atop the scaffolding in the church, Branagh’s character asks Firth’s what he expects to find under the centuries of whitewash.  ‘Judgement I think,’ Firth responds, and indeed this is a film about discovery and healing, particularly for the central character as he sees through his work with unrelenting exactitude.  Although an atheist himself, Birkin can appreciate the work of art his own labour is revealing and ponders on the original artist with whom he feels an affinity.  He also feels a particular responsibility to the mural and wonders later on as to why its creator seemed to leave it for another to complete.  The answer presents itself as he drops one of the tools of his own trade.  The loss of spirituality is a prevalent theme in A Month in the Country as is the seeming callousness of a God that would allow senseless death and bloody warfare.  At one point in the film Birkin and the Ellerbeck children visit a terminally-ill child who seems only too well aware of her impending death.  As witnessed by Moon in the following scene, Birkin vents his own frustration at the structure of the church, the seat of the ordinary people’s faith.  ‘There is no God,’ he declares.  But there is recovery, and gradually Birkin is becoming a whole man again as he moves towards the completion of his task.  Despite the suggested attraction between him and Alice, he realises the impossibility of this situation, and confides to Moon that he will attempt to revive his own flagging marriage one more time. 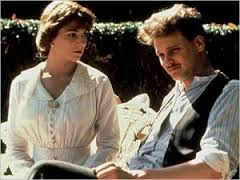 Theatrically released in 1987, and screened in the Un Certain Regard section of the 40th Cannes Film Festival, this is a beautifully shot film with terrific performances and a fine score by Howard Blake.  Firth and Branagh are excellent as Birkin and Moon respectively and give a sense of things to come from them both.  The late Natasha Richardson is radiant as Alice.  Jim Carter is suitably boisterous yet benevolent as Ellerbeck.  The cinematography is by Kenneth MacMillan and his compositions are quite beautiful throughout.  Watch out in particular for a quite breath-taking scene as Firth and Richardson amble through a small wood.  In 2008 a complete print of the 96-minute film was discovered in the Academy Film Archive in Los Angeles.  This year (2016) BFI have released a quite pristine version of the film on Blu-ray.  I recently purchased this and marvelled at how well it looks.  I’d only seen A Month in the Country once before, but was glad of this timely opportunity to re-visit this very fine film.  I’d highly recommend it to anyone who might currently be watching First World War films or reading literature of the same era.  It’s a very worthy entry in the genre and resonates with its universal reflections on the horrors of warfare and the struggle of the ordinary man to comprehend his place in a world which allows such carnage.  Check it out if you have a chance.