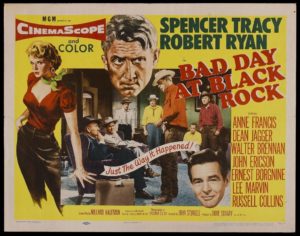 There are more than a few shades of the Western film prevalent in John Sturges’s 1955 Bad Day at Black Rock, starring Spencer Tracy and Robert Ryan, and the opening image of a speeding locomotive moving through a typical western landscape bring this genre immediately to mind.  A stranger (played by Tracy) disembarks in the visually inhospitable town of Black Rock and is reliably informed that this is the first time the train has stopped there in four years.  Unsurprisingly, the local townspeople view his arrival with more that a smidgen of suspicion.  If this were a frontier town of a different epoch, the strange man might be a gunslinger or a lawman intent on some secret purpose.  His decision to get off at Black Rock is clearly driven by some ulterior motive.  Questioning reactions are captured by the director at an early point and he effectively evokes an atmosphere of wariness and latent hostility.  What has brought about this stranger’s appearance?  What business could he possibly have in such a stark environment? 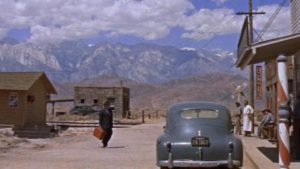 The year is 1945 we soon learn; the war has just ended a few months before.  The white-haired stranger’s name is John J. Macreedy and he wishes to visit a Japanese-American farmer named Komoko who resides in the vicinity.  But from the get-go Macreedy’s efforts to go about this relatively straightforward undertaking of his are met with mounting antagonism.  The hotel room he is initially given is taken over by one of the local heavies played by Lee Marvin.  Of greater significance is the introduction of Robert Ryan’s character Reno Smith.  In spite of the semblance of law and order and due process in the town, Smith is clearly the kingpin, the man no one else dares to cross.  Macreedy complains about how everyone seems intent on ‘needling’ him, but to no avail.  When he visits the local jail, he is struck by just how ineffectual the local sheriff – Tim Horn (Dean Jagger) – appears to be.  Horn has an unmistakable proclivity for the hard stuff, but is one of the more amenable characters in the town; however, just like the others, he is entirely unhelpful (‘If there are no further questions’).  The name Komoko is known to Horn as well, but a deep secret regarding this character’s whereabouts lurks beneath the surface.  Smith informs Macreedy of how the farmer was moved to a relocation centre in the aftermath of Pearl Harbor.  When Macreedy is told by the local veterinarian and undertaker Doc Velie (Walter Brennan) that Komoko is in fact dead, the war veteran (who has lost one arm in the recent conflict) grows all the more apprehensive.  Travelling out to the nearby Adobe Flat – where Komoko had a homestead – he realises for the first time that he may be in mortal danger himself.  This fact is further emphasised as one of the other town heavies (played by a viciously grinning Ernest Borgnine) attempts to run him off the road. 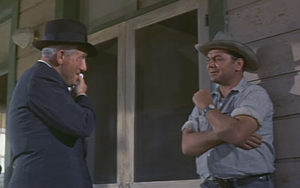 Unbeknownst to Macreedy, a decision regarding his own fate has already been decided upon by Smith in the presence of his henchmen (‘This guy’s like a carrier of small pox’).  Upon his return from Adobe Flat, Macreedy has good occasion to question the mores and morality of this increasingly pernicious place when he asks Liz Wirth (Anne Francis) what is inherently wrong with the town – ‘The rule of law has left here and the gorillas have taken over’ he remarks in one of the more overt proclamations on the general state of affairs in Black Rock.  When subsequently quizzed by Smith as to why he is seeking the truth in relation to Komoko (‘Why would a man like you be looking for a lousy Jap farmer?’), Macreedy reveals how he had lost his arm in the Allied campaign in Italy.  The implication therein is that since that time he has felt incomplete somehow.  Like many war veterans, he is trying to find a way back in the real world; trying to make sense of it all; attempting to reawaken an overall sense of purpose.  In contrast to this is the evident bigotry and insularity of the town as embodied by Smith – ‘To us, this is our West and I wish they’d leave us alone’ he comments with regard to outside forces and alien races as he sees them.  Smith’s backstory is scarcely remarkable and infused with little in the way of achievement or success.  He tells Macreedy of how he tried to enlist in the marines directly after Pearl Harbor, but was refused entry on account of his failed physical.  Ryan’s performance (one of the best of his career) is angular and aggrieved in equal measure.  A latent hatred of all things and peoples un-American (as he perceives them) informs his rationale and his manner.  Komoko was a point of representation and an embodiment to Smith in this respect.  Macreedy, for his part, tells Smith that he suspects there is something buried on Komoko’s farm.  The wild flowers he has seen growing there have led him to this supposition.  It’s a direct challenge to Smith in terms of the true events which took place on the small homestead in the wake of Pearl Harbor.  From the audience’s point of view, it’s the beginning of the end game with respect to the narrative trajectory.

Macreedy’s subsequent attempts to leave Black Rock are thwarted by Lee Marvin’s character and his failed effort to make contact with the state police.  One of the film’s most famous scenes takes place when Ernest Borgnine’s Coley Trimble provokes Macreedy into a fight in the local diner (‘I’m half ass, half alligator’).  Employing martial arts which he has presumably learnt in the service, Macreedy easily gets the better of the so-called tough guy.  Suitably riled by this physical confrontation, Macreedy finally tells Smith of his belief that he is responsible for Komoko’s death (‘Whatever happens, you’re sunk’).  In a subsequent scene, Doc Velie confirms as much as he refers to the ‘settled melancholy’ which the town fell into in the aftermath of Komoko’s death (‘Four years ago, something terrible happened here’).  In a stark moment of revelation (and one of Tracy’s finest scenes in the film), Macreedy tells of how Komoko’s son had saved his life in Italy.  He had come to Black Rock with the intention of presenting the son’s posthumous medal to his father.  Macreedy is told of how Smith killed Komoko after he was turned down for enlistment.  Attempting once again to leave the town under the cover of darkness, Macreedy is seemingly betrayed by Liz Wirth and confronted in a canyon by a gun-toting Smith.  The quick-thinking ex-serviceman gets the better of Smith with a Molotov cocktail, but Liz is killed by Smith in the process.  As Macreedy finally leaves the town by train the next morning, a deferential Doc Velie persuades him to leave Komoko’s son’s medal behind in the town – ‘Maybe we need it.  Something to build upon.’ 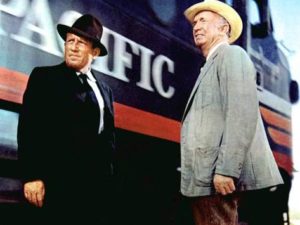 A tight-running and taut thriller which – as I suggested – has many familiar tropes of the western genre, Bad Day at Black Rock boasts a terrific cast and remains one of director John Sturges’s best works behind the camera.  The Illinois-born director would go on to make films such as 1957’s Gunfight at the O.K. Corral (starring Burt Lancaster as Wyatt Earp and Kirk Douglas as Doc Holliday) and – more famously – 1960’s The Magnificent Seven.  His handling of ensemble casts and headline actors undoubtedly reached its zenith when he helmed 1963’s The Great Escape.  For the purposes of this article, it is sufficient to say that Sturges understood the western genre and ventured into it in cinematic terms a number of times during the course of his career.  The presence of actors such as Robert Ryan, Lee Marvin, Ernest Borgnine and Walter Brennan also evoke such thoughts of the western genre.  Ryan and Borgnine would both feature in Sam Peckinpah’s 1969 masterpiece The Wild Bunch.  Marvin appeared in more than his fair share of westerns too including, most memorably, the titular character in John Ford’s The Man Who Shot Liberty Valance (1962).  With reference to Walter Brennan, I only have to mention such classics as My Darling Clementine and Red River; Brennan won the third of his three Best Supporting Actor Oscars for 1940’s The Westerner in which he played Judge Roy Bean opposite Gary Cooper. 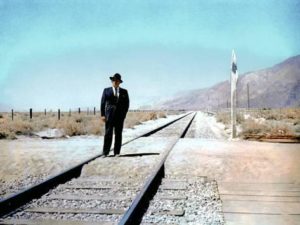 In terms of performances, this is Spencer Tracy’s movie from first to last and he deservedly received the fifth of his nine Academy Award nominations for Best Actor.  Depicting a certain segment of American society which is deeply insular and more than a little bigoted with respect to racial difference, Bad Day at Black Rock has much to say on the need for that country to move on in the post-war years.  The war which has taken place in microcosm during the events of the film is over in the final scene and the requirement for the town (read nation) to heal is expressly felt – and indeed articulated by Brennan’s Doc Velie.  Based on the short story Bad Time at Honda by Howard Breslin, the film still looks glorious thanks to the photography of William C. Mellor (who shot it in CinemaScope).  Other notable credits in the film’s production include Andre Previn who composed the score.  With the Cold War continuing to escalate and the prevailing witch hunt that was McCarthyism, America as a nation was in an uneasy place I would suggest during the mid-1950s.  Bad Day at Black Rock contains some very relevant messages for its era with respect to racial intolerance and rampant parochialism.  The ‘settled melancholy’ must be resisted; mindsets must advance; the nation as a whole must find a better way as expressed by Doc Velie in the aforementioned closing scene.  Such universal truisms aside, let’s also remind ourselves of what a terrific and superbly-executed thriller this is and how it repays repeated viewings.  The central performances, direction, cinematography and other production elements are just some of the many reasons to enjoy this bad day in the context of the modern-day west.