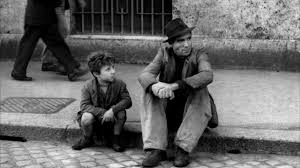 The setting and circumstances of poverty and want in post-war Italy is established at a very early point in Vittorio De Sica’s masterly 1948 film Bicycle Thieves.  A group of able-bodied men are shown vying for much-needed employment.  Antonio Ricci (Lamberto Maggiorani) is among them and he is chosen to hang posters on the proviso that he provide his own bike for transport.  It’s the first of several moments in the film in which De Sica offers his central characters and us, the audience, a fleeting glimmer of hope followed by a rush of unmistakable despair.  Antonio has pawned his bicycle – no doubt to put food on the table – and unless he can retrieve it, the job will go to someone else.  ‘I’ve been cursed since the day I was born,’ he complains to his disheveled wife Maria (Lianella Carell).  Proving herself to be more resourceful and quick-thinking than he is, Maria strips the best sheets off their bed and sells them.  De Sica points to the general malaise of poverty which is prevalent in that memorable scene in which we see the sheets being added to countless others at the shop.  The improvisation works as Antonio is able to buy back his precious bike with the money received.  On the way home, Maria insists on visiting Santona – a fortune teller who had predicted to her that Antonio would get a job.  The place accorded to such alleged seers is more than hinted at by De Sica and is counterpointed with the near-reverence which the bicycle is accorded by Antonio and his son Bruno (Enzo Staiola).  Hanging in a room where the family’s young baby rests, and a poster of Il Giro D’Italia is visible on the wall, we are in little doubt as to the importance of the two-wheeler.  This is a source of hope; this, potentially, is salvation for the hard-pressed family. 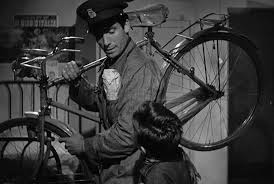 I spoke of alternating passages of hope and despair throughout the 93-minute film, and the latter most definitely occurs when, on the first day on the job, the bicycle is stolen from Antonio.  The authorities are of little help to him.  ‘Look for it yourself,’ he is curtly advised at the police station.  Hope raises its head once again as a friend of Antonio’s, Baiocco, suggests that they trawl the market the next morning where such stolen items are often sold on.  But expectations are dashed once again as the near-impossible task of finding the exact model (referred to as a Fides) becomes apparent in a vast sea of bicycle frames, tyres and various parts.  Father and son get soaked in an ensuing downpour (‘It’s hopeless.  Every Sunday it rains’), but again there is a flicker of possibility as Antonio spots a figure he believes to be the thief carrying out a transaction with an elderly man.  The grey-haired individual protests his innocence when questioned by Antonio at a Sunday Service – ‘Leave me alone.  I’m nothing but an old man’ – but it’s absolutely clear to us and to Antonio that he is lying in an effort to save his own skin. 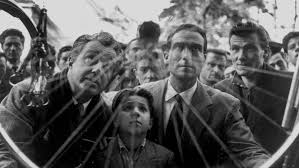 The growing sense of desperation is manifest in the scene in which Antonio strikes Bruno for allowing the old man to get away.  He subsequently attempts to make amends to the teary-eyed boy by taking him to a fancy restaurant (by their standards of course) for pizza.  ‘Let’s forget everything,’ he implores of his son as they order mozarella on bread (the restaurant is not a pizzeria as he’d supposed).  ‘We’ll eat and be happy for now,’ he declares, but such daydreaming has no real place in this cruel world and, before long, Antonio has become reflective thanks, in part, to the wine he is imbibing.  ‘To think, if I had my bicycle, how much I’d earn.  We could live again,’ he considers as he punishes himself with thoughts of the money which would be at the family’s disposal. 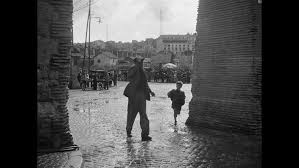 Antonio does something he’d mocked earlier in the film by visiting Santona, hoping that she might throw some light on his fate.  The advice she offers – ‘Either you find it now, or you never will’ – offers very little to him and suggests that the reputed fortune teller is little more than a charlatan.  And then the bicycle thief appears again and is pursued by Antonio through a brothel and into his own neighbourhood.  ‘What bicycle?  I’m no thief!’ he protests before affecting a fit in front of his mother and friends.  De Sica alludes here again to the destitution which is so rampant in the post-war city as we see inside the alleged criminal’s home – a sparse area housing as it does four people.  The police officer who attends the scene impresses upon Antonio the difficulty of being able to prove anything and he is taunted by the crowd of onlookers as he and Bruno depart the district – ‘Don’t ever come around here again!’  The final moments of Bicycle Thieves will be well known to those who have seen the film.  In a moment of outright desperation, Antonio attempts to steal a bicycle himself, but is caught in the act and called a criminal and a scoundrel.  The owner allows him to go free, however, when he spots Bruno.  ‘The man has enough trouble,’ he remarks, but the ensuing rebuke – ‘A fine example you set for your son’ – is as bad as any charge or interrogation the police might have presented him with.  It is the father who is in tears at the end of the film, humiliated, guilt-ridden and debased.  Bruno takes his hand and the two become one with an emerging football crowd.  Despair is the overriding emotion at the close of Bicycle Thieves as father and son face into an uncertain future.  Rome – where the film is set – was one of many such cities and towns and villages in post-war Italy which was at a far remove from the economic miracle which would occur in the 1950s and 1960s.  There are no miracles in Bicycle Thieves, only reality and its overwhelmingly harsh truths. 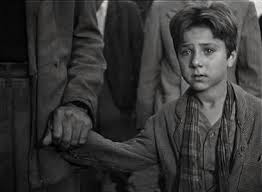 Bicycle Thieves has so often been held up as the very embodiment and epitome of Italian neorealism.  The tag is well deserved.  If Rossellini’s Rome, Open City was the first film in this particular cinematic movement, then Bicycle Thieves is surely its best and most famous example.  An honorary Academy Award which was bestowed a few years after it’s theatrical release recognised as much and the film has also found its way onto the Vatican’s list of great films under the designation Values.  In some countries De Sica’s masterpiece has come to be known as Bicycle Thief, but this title is something of a misnomer.  One cannot overlook the fact that, at the film’s climax, Antonio lowers himself to the very crime he has found so odious throughout.  This is De Sica’s ultimate way of showing us how the individual can become stripped of his own identity when confronted with seemingly insurmountable odds.  And it shames the father in front of the son to reinforce this view.  As a viewer one tries to resist the temptation to speculate as to what the future might hold for Antonio, Maria and their young family.  Will Bruno be swayed in some detrimental way by the act he has witnessed?  And what chances for the father himself in securing gainful employment again?  It may indeed be the case that, as he puts it, he has been cursed since the day he was born.  But in De Sica’s marvellous work we are not cursed, but rather gifted with one of the very best Italian films of all time.  A simple premise which is a showpiece for Italian neorealism as a whole.