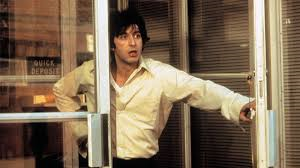 It’s August 22nd 1972 – one of the hottest days of the summer – and a group of three men decide to hold up the First Brooklyn Savings Bank in Brooklyn, New York.  The kingpin appears to be Sonny Wortzik (Al Pacino), but it is quite evident from an early stage that none of the men have ever undertaken a job like this before.  In point of fact, the younger member of the group Stevie (Gary Springer) quickly drops out – ‘I’m not going to make it Sonny,’ he declares before asking if he can take the car home.  ‘Take the subway, we need the car,’ Sonny tells him in one of many such incidentally humorous moments in Frank Pierson’s script.  ‘I’m a Catholic and I don’t want to hurt anyone,’ he advises the bank manager Mulvaney and his team of all female bank tellers; but Sonny’s plans for a sizeable haul come a cropper as he discovers that the daily cash pick-up has already taken place.  Much to his chagrin, there is little more than a thousand dollars in the bank’s vault.  His annoyance leads to a verbal outburst and he is tentatively asked to watch his language by the head bank teller Sylvia (Penelope Allen).  ‘I feel what I feel you know,’ Sonny replies before determining to take traveler’s cheques instead.  Sonny makes the fatal error of burning the bank’s register in a trash can in order to prevent the cheques from being traced.  A short time later, the phone rings and the voice on the other end is that of a police sergeant named Moretti (Charles Durning).  Positioned in a barber shop just across the road, the police forces are arriving on site in their droves.  It’s quite clear that Sonny and his partner Sal (John Cazale) are between a rock and a hard place.  Their plan has come to naught and, if they surrender, they will face several charges.  Sonny’s inept first attempt at bank robbery is even berated by the head bank teller Sylvia – ‘Did you have a plan?’ she asks in a voice loaded with sarcasm.  ‘Was it all just a whim?’ 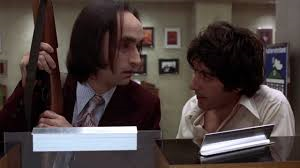 Sidney Lumet’s superb 1975 crime-drama is based on an article by P.F. Kluge titled ‘The Boys in the Bank.’  In turn, it relates the true story of a similar robbery which took place in Brooklyn in August 1972.  The real-life event occurred at a branch of the Chase Manhattan Bank and was carried out by one John Wojtowicz and his partner Sal Naturale.  The tirade of criticism which Sylvia directs at Sonny is well-founded because at this point of the film, at least, there is no discernible motivation for his actions or for those of the rather poker-faced Sal.  Meantime, the situation outside has escalated as a crowd of onlookers has gathered.  Lumet suggests the media circus which has latched on to the story by way of the TV crews and reporters who intermingle with the huge police presence.  The incident – which was intended to be fast and bereft of such drama – has got out of control and descended into the realms of farce.  One of the younger bank tellers (played by Carol Kane) takes a phone call from her husband and discusses what he should do for dinner.  ‘He wants to know when you’ll be through,’ she tells Sonny.  The problem for the latter is that he has no idea when he’ll be through or what this will entail; he also fears the police presence as mentioned in a conversation with Mulvaney.  Not for the last time, Sonny refers to the Attica Prison riot of September 1971 where 33 prisoners were killed for their part in the uprising.  ‘We’re Vietnam veterans, so killing don’t mean nothing to us,’ he tells Moretti as he attempts to up the ante.  As a show of good faith, Moretti convinces Sonny to release one of the hostages.  Sonny decides upon the rather elderly security guard who is suffering an asthma attack.  ‘You got the militia out here, huh?’ he remarks as he talks to Moretti on the street.  The cameras click, the large crowd responds favourably and Sonny senses his fifteen minutes of fame.  Perhaps even longer if he so wishes.  ‘Attica!  Attica!’ he screams at the hordes and police force.  ‘Tell them to put their guns down!’ he orders Moretti, ‘Attica!  Attica!’ 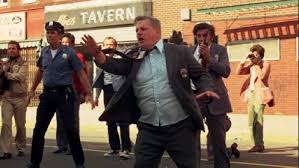 The attendant media frenzy (which is such a commonplace today) is one of the most prominent features of Dog Day Afternoon.  Watching on a television set at home, Sonny’s mother innocently enquires as to why her son didn’t tell her he needed money.  Becoming increasingly caught up in this whirlwind himself, Sonny takes a call from a TV station, but the interview is quickly terminated as he becomes irked by the questions asked.  ‘I guess he didn’t appreciate your use of language,’ an observant Mulvaney remarks.  Sonny settles on a course of action and demands that he and Sal be given a plane so that they can depart for ‘sunny climes’ as he puts it; Algeria is mentioned as one possible destination.  In one of the film’s more memorable moments, Sonny asks Sal if there is a special country he’d like to visit.  ‘Wyoming’ Sal replies in an on-set improvisation by the as-always excellent John Cazale.  ‘Wyoming isn’t a country,’ Sonny informs him without missing a beat.  His wife Angie, meantime, is seen interviewed by police officers at her home.  She vaguely ascribes her husband’s erratic behaviour to ‘body functions.’  An incident at the rear of the bank building causes Sonny to discharge his firearm and there follows a wonderfully manic exchange on the street between Pacino and Durning.  The latter calms the would-be bank robber down by telling him a bus will transport them to JFK where a plane awaits.  Sonny orders some food and a summation of all the hysteria and ridiculousness that has gone before is provided as the pizza delivery boy gets in on the act.  ‘I’m a fucking star!’ he declares as he enthusiastically takes a skip and jumps in the air. 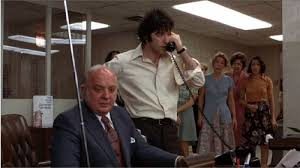 Matters take a most unexpected turn as Moretti informs Sonny that they are bringing his wife.  With the exception of Sonny and Sal, she is not what anyone could have anticipated.  Leon Shermer (Chris Sarandon) is a pre-operative transgender woman who’d married Sonny the previous November.  It quickly emerges that one of Sonny’s primary reasons for holding up the bank was to help pay for her sex reassignment surgery (which is mentioned to cost some $2,500 dollars).  A physically frail Leon, who has been institutionalised, reveals how Sonny has been, ‘crazy all summer.’  She tells Moretti how she took off for Atlantic City after their wedding and was later informed by a psychiatrist that she was, ‘a woman trapped inside a man’s body.’  Moretti attempts to convince a sobbing Leon to talk to Sonny, but she refuses.  Inside the bank, Sal takes great exception to the media report he overhears which refers to ‘two homosexuals’ holding up the bank.  ‘It’s just a freak show to them, it doesn’t matter,’ Sonny tells him.  The FBI in the form of Agent Sheldon (James Broderick) and Agent Murphy (a youthful Lance Henriksen) have taken over negotiations and request to see the hostages.  Sonny complies and an increasingly unhinged Sal asks Sheldon to, ‘Tell the TV to stop saying there’s two homosexuals in here.’  In an air of foreboding, Sonny asks Sheldon if he would kill him.  The latter replies that he would if he had to because it’s his job.  ‘You know the guy who kills me, I hope he does it because he hates my guts, not because it’s his job,’ Sonny responds. 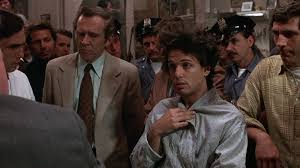 There follows the very best scene from Dog Day Afternoon and it’s wonderfully acted by both Pacino and Chris Sarandon.  Persuaded by Sheldon to speak to his husband, Leon asks Sonny to make it clear to the listening police (though he denies they are on the same line to Sonny) that he is not an accessory – ‘I didn’t ask you to go rob a bank,’ he points out with reference to the money he needs for the operation.  Screenwriter Frank Pierson stated that this telephone conversation between Sonny and Leon was effectively written as two monologues and then intercut for the scene which takes up several minutes of screen time.  It’s acting of the very highest order, poignant at times and also funny.  ‘Why are you going to Algeria?’ Leon enquires in such a vein.  ‘Why am I going to Algeria?’ Sonny replies, ‘because I think they have a Howard Johnson’s there, that’s why I’m going to Algeria.’  Sonny keeps repeating the line, ‘I’m dying,’ here which Leon castigates him for.  In a subsequent conversation with his wife Angie, Sonny says this again, but quickly flies into a rage when she alludes to his temper and violent outbursts.  She refuses to come down to the bank on the premise that she can’t get a baby-sitter prompting Sonny to hang up.  This, of course, is another absurdly funny moment in the film, but Pierson perhaps takes it a step too far when Sonny’s mother appears and tries to persuade him to give up – ‘How beautiful you were as a baby.’  ‘I’m a fuck-up and an outcast and that’s it,’ he declares to her, but it’s one moment from Dog Day Afternoon which doesn’t work and smacks somewhat of an overkill by Pierson and Lumet.  John Wojtowicz at the time stated his own objection to this scene which he said never happened.  He also took some exception to the portrayal of his real wife Carmen Bifulco, but was highly complimentary of the performances, particularly those of Al Pacino and Chris Sarandon. 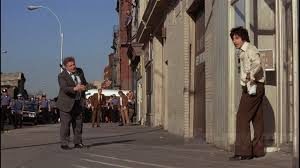 Sidney Lumet (12 Angry Men, Network) was a wonderful director of actors and such is the case with this superb entry in his impressive filmography.  Throughout his career, the Philadelphia-born director encouraged improvisation and work-shopping on his sets and one of the results here was the aforementioned ‘Wyoming’ line courtesy of Cazale.  Lumet and Pacino had previously collaborated on 1973’s Serpico and – as with the case of that story concerning the NYPD officer – the actor received an Academy Award nomination for Best Actor.  Chris Sarandon also deservedly received recognition from the Academy by way of a nomination for Best Supporting Actor.  Dog Day Afternoon was also nominated in the categories of Best Picture, Best Director and Best Film Editing.  Frank Pierson won the sole gold statuette for the film – Best Original Screenplay.  In the film’s closing moments, having made out his last will, Sonny departs with Sal and the hostages for the airport.  If you’ve already seen the film, you’ll know this does not play out very well for him and leads to the death of Sal.  Finally arrested on the tarmac of the runway, Sonny gazes at the freed hostages and then looks at Sal’s body as it is taken away.  Tears begin to stream down his face as he realises that the jig is truly up.  The dog day that’s come and gone is now over and Sonny is facing a lengthy stretch behind bars.  John Wojtowicz himself served five years of his 20-year sentence.  He died of cancer in early January 2006.  He was paid $7,500 dollars for the movie rights to his story, which he used to help finance his wife’s sex reassignment surgery.  Elizabeth Debbie Eden passed away in September 1987 at the age of 41.  The bizarre story of those events of August 22nd 1972 produced in Dog Day Afternoon one of the very best films of the 1970s.  With the sole exception of a scene I have mentioned earlier, this is a film that is neither cheap nor exploitative, but, rather conveys its story about characters under severe pressures, who are in the throes of extraordinary circumstances, with great heart and thoughtful deliberation.  ‘Attica!  Attica!’  Powerful and memorable in equal measure.