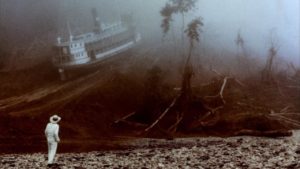 ‘I shall move a mountain,’ Brian Sweeney Fitzgerald, aka Fitzcarraldo, declares at an early point in writer-director Werner Herzog’s 1982 adventure-drama film Fitzcarraldo.  The character – as portrayed by actor Klaus Kinski – is without doubt the most famous of Herzog’s impossible dreamers.  The grand vision here is to bring opera to Iquitos and, in order to do so, Fitzcarraldo realises that he needs much capital behind him so that he can build an opera house in the Peruvian city.  His driven nature is established by Herzog in the opening scene as we see him paddling frantically to see a performance by his idol Enrico Caruso.  A memorable scene which follows a short time later involves him playing a record of the Italian tenor to some children who have stolen into his room.  But dreams come at a price and with one substantial failure already behind him (the Trans-Andean railway), Fitzcarraldo knows that he must put together a considerable amount of money in order to further his plans. 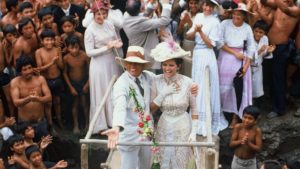 Herzog presents us with the more deranged side of Fitcarraldo’s persona as he occupies the bell tower of a church in Iquitos.  Ringing the bell in an almost possessed fashion, Fitzcarraldo declares that, ‘The church remains closed til this town has an opera house.’  Aficionados of the film will know that prior to Kinski’s involvement, actor Jason Robards had been cast in the part with Mick Jagger playing his sidekick.  Robards fell ill on the set and was not allowed return forcing Herzog to re-cast the part (Jagger also subsequently dropped out).  Some of the remaining footage of Robards and Jagger involves this very scene in the bell tower and can be seen in both Les Blank’s 1982 documentary Burden of Dreams and Herzog’s own later documentary My Best Fiend (concerning his often turbulent relationship with Kinski).  It suffices for me to say here that, although an immense setback at the time, the change in leading men benefited the film.  With all due respect to Robards, it’s hard to imagine anyone but Kinski in the title role; he inhabits the part in a way few actors can do and in the bell tower scene he channels the character’s relentlessness as well as his impatience.  Fitzcarraldo is led off to prison after this rather impetuous demonstration of his, but released when his girlfriend Molly (Claudia Cardinale), a brothel owner in Iquitos, intervenes.  The business savvy madam suggests that he consider the highly lucrative trade of rubber to further the venture.  Fitzcarraldo seeks the advice of one Don Aquilino (Jose Lewgoy), who is himself a very successful rubber baron.  Examining a map of the Amazon Basin, Fitzcarraldo focuses on a parcel of land which lies unclaimed.  Located on the Ucayali River, the area in question is cut off from the Amazon by a deadly section of rapids.  Noticing that the more accessible Pachitea River almost touches the Ucayali at a certain point, Fitzcarraldo determines to lease the land from the Peruvian government.  With Molly’s financial assistance, he purchases a steamship which he names the Molly Aida.  A very dubious Aquilino informs him he has a bet going as to how quickly he will become bankrupt.  Undaunted by such commentary, Fitzcarraldo presses ahead with his enterprise. 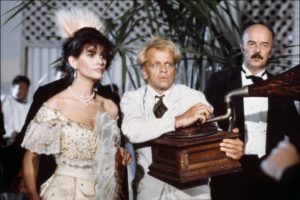 Fitzcarraldo puts together a crew which includes Cholo (an employee of Aquilino’s), a captain named Paul (Paul Hittscher) and a mischievous cook named Huerequeque who has a fondness for the hard stuff.  En route up the Pachitea River, Fitzcarraldo claims some tracks from his failed Trans-Andean railway project.  His design is to access the closest point between the Pachitea and Ucayali and – with the assistance of indigenous people, as he hopes – pull the steamship over a hill so that the rubber there may be harvested.  Remarking in later interviews, Herzog said that this physical endeavour was the central metaphor of his film and, of course, it became a most laborious task in both the screen version and in real life.  The director presents us with some suitably tense scenes as Fitzcarraldo and his crew first encounter the Jivaros.  An upside-down black umbrella is seen floating down the river and there is a worded speculation that this belonged to a missionary that the Jivaros killed.  ‘Everything depends on how we behave,’ Fitzcarraldo concludes and, as a means to impress the tribe, he puts on one of his precious Caruso records.  Overnight, many of his crew desert leaving only him, the Captain, Cholo and an inebriated Huerequeque on board.  As I watched this part of the film again – particularly having regard to the hidden Jivaros – I couldn’t help but think of parallels to Coppola’s Apocalypse Now.  There are themes examined here which have a commonality with the Vietnam epic, not least that of the exploitation of native peoples.  The Jivaros eventually show themselves, armed with bows and arrows on canoes.  A remarkably tense scene ensues in which they watch the remaining four crew members eat dinner.  Herzog later acknowledged that he used the extras intense dislike of Kinski to good effect here.  The actor himself seems to be aware of this as he shifts uncomfortably in his seat and furtively glances about.  Improvisation would you say or simply just fine acting? 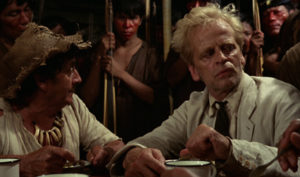 The Jivaros refer to Fitzcarraldo’s ship as the ‘white vessel’ and appear to expect some sort of salvation from it.  They agree to help Fitzcarraldo pull his ship over the hill from the Pachitea to the Ucayali without any apparent conditions.  The enormity of the task does not seem to be quite appreciated by Fitzcarraldo as he sets about engineering the endeavour – ‘That slope may look insignificant, but it’s going to be my destiny.’  An accident and fatality threaten to endanger the project, but finally the Molly Aida is pulled to the other side where the Ucayali flows.  But Fitzcarraldo’s plans are thrown into turmoil when the Jivaros cut the ship loose and it strays into the deadly rapids – The Pongo.  Their belief is that the sacred vessel will soothe the evil spirit of the rapids, but all it succeeds in accomplishing is to effectively end Fitzcarraldo’s pursuit of the rubber and his dream of opera in Iquitos.  But there is a triumph of sorts at the film’s conclusion as the visionary (with the assistance of Don Aquilino) manages to bring an opera company to Iquitos on board the Molly Aida.  Proudly standing over a velvet red chair on the top deck and smoking an absurdly huge cigar, Fitzcarraldo has indeed succeeded in his dream for a fleeting moment.  There may be no opera house in Iquitos in his lifetime, but the dreamer has in a sense made good upon his dream.  He has – in his own words – moved a mountain.  He has dared to dream. 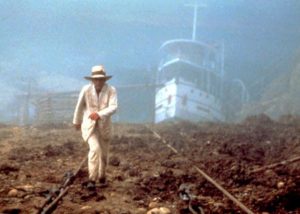 Dreams are a central theme in Fitzcarraldo as they were in the making of the troubled production.  I previously mentioned the re-casting which had to take place following Jason Robards’s untimely illness.  According to Les Blank’s Burden of Dreams, approximately 40% of footage had been shot by that time and Herzog was forced to effectively start from scratch.  The director’s 1999 documentary My Best Fiend relates the difficulties he experienced on-set with Kinski on this as well as the four other films they made together.  The actor’s volatile tantrums were frequent and very disconcerting to the native Indians.  As the arduous shoot was approaching its conclusion, one of the chiefs offered to have Kinski killed for Herzog.  ‘No, for God sake!’ the director replied, ‘I still need him for shooting!’  Other difficulties of substance included the boat repeatedly slipping down the hill; the engineer resigning telling Herzog that there was a 70% chance that the cables would snap and kill many of the workers/extras; a plane crash; and a crew member being bitten by a deadly snake.  After Robards’s departure, Herzog was forced to return to his investors in order to secure additional financial backing.  Asked by one of them if – in light of all the difficulties to that point – it might not be better to quit, the director responded in a typically indomitable way – ‘How can you ask this question?  If I abandon this project, I will be a man without dreams and I don’t want to live like that.  I live my life or I end my life with this project.’  At another juncture in Blank’s Burden of Dreams, the director is heard to remark, ‘I don’t want to live in a world without lions, and without people who are lions.’  This statement informs much of Herzog’s vision and indeed the vision of Fitzcarraldo itself.  It’s a film about dreams, about a dreamer who seeks to take on the raw force of nature itself and who comes out second best at the end of it.  But the significance of a dream is having it in the first place Herzog suggests; the actualisation of the dream here is of secondary importance.  And Fitzcarraldo does have his minor triumph at the end as he returns to Iquitos with the opera company.  Far from being a conquistador of the useless – as was suggested by a detractor earlier in the film – he smiles proudly from the upper deck of the Molly Aida, savouring the moment and presenting the performers to the gathering crowd on the banks of the river (which includes Molly).  A moment will suffice here.  This moment will more than suffice for Fitzcarraldo and the final image of a beaming Kinski is one which lingers long in the memory.