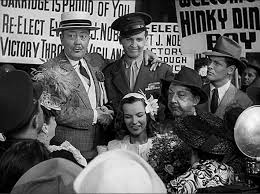 The subjects of patriotism, hero-worship, small-town ideals and parochial politics are examined in Preston Sturges’ 1944 satire Hail the Conquering Hero starring Eddie Bracken, Ella Raines and William Demarest.  Hero begins with Bracken’s Woodrow Lafayette Pershing Truesmith sitting by himself forlorn in a bar.  The exact reason for his unhappiness is not yet known, but a bartender tries, quite unhelpfully, to perk him up.  ‘Why don’t you grab yourself a skirt and have yourself a time,’ he suggests – ‘smile and the world smiles with you, frown and you’re alone.’  Into this bar stray a group of six Marines who have just returned from the Battle of Guadalcanal.  They are somewhat down on their luck, having been apparently conned out of money, and cannot even afford the price of one beer between them.  A typically amusing Sturges scene follows (as per usual he wrote the script as well as directing) in which the Sergeant – Heffelfinger (Demarest) attempts to sell a piece of supposed war memorabilia to the bar manager who, as it turns out, is only too familiar with this particular ruse.  Woodrow buys the six a round not in an attempt to ingratiate himself with them, but rather as an act of admiration – ‘I can’t think of anywhere I’d rather spend my money than on the Marines.’  The group soon learn that Woodrow tried to become a Marine himself, but was medically discharged from boot camp on account of his chronic hay fever.  The young man speaks passionately of his desire to serve especially given the fact that his father – ‘Hinky Dinky’ Truesmith died in such service at the Battle of Belleau Wood on the day he was born; posthumously he received the Congressional Medal of Honor.  The no-nonsense but likeable Heffelfinger realises that he served under Woodrow’s father during the First World War and tells the rest of the group about the fine soldier ‘Hinky Dinky’ was.  Appalled by the way in which Woodrow has spent a year away from his home and his mother, owing to his embarrassment at having been medically discharged, one of them decides to take matters in his own hands phoning Woodrow’s mother and informing her that her son was injured at Guadalcanal and has been honourably discharged.  And so a hero is on his way home. 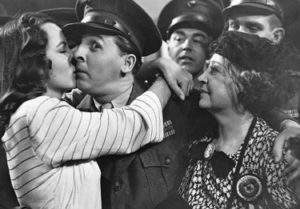 The six Marines led by Heffelfinger accompany Woodrow on his train journey home.  The latter is far from comfortable with this deception and even less so when he sees the nature and extent of the welcome home ceremony which awaits him.  Four bands play as speeches are made (a nice running gag here throughout the film as they continuously strike up too early) and the perturbed-looking Woodrow is greeted by his mother (Georgia Caine) and sweetheart Libby (Raines).  Another act of deception is in progress here which Woodrow is not yet aware of – Libby has, meantime, got engaged to Forrest Noble (Bill Edwards), the mayor’s son; Woodrow had written to her during his supposed period overseas telling her not to wait for him.  His mother and friends are somewhat perplexed by Woodrow’s agitated state, but ascribe this to ‘jungle fever.’  In a moving scene Mrs. Truesmith shows the six Marines a portrait of her deceased husband – ‘Now I have two heroes.  Now I have eight heroes,’ she tells them in one of Hero’s genuinely touching moments. 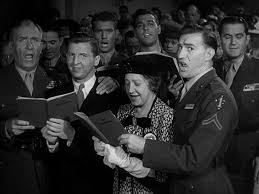 Plans are soon underway to dedicate a public monument to both Woodrow and his late father (to be named Like Father, Like Son), and matters are further complicated as Woodrow is approached by some of the more prominent members of the community to stand in the forthcoming mayoral election against the incumbent Everett D. Noble (Raymond Walburn).  In a subsequent speech to the adoring townspeople, Woodrow tries in vain to dissuade such an enterprise, premised – as he knows it is – on an untruth.  ‘Ladies and Gentlemen…I wish I were dead…I’m not a hero,’ he informs them, but the enthusiastic audience merely interpret this as modesty on his part.  The community’s fervour and reverence for their returned hero knows no bounds and a campaign is quickly begun, which includes a rousing song called ‘We Want Woodrow’ (one of two songs which were written specifically for the film by Sturges himself).  The six Marines play their part in this mounting zeal by regaling the crowds with fabricated stories of Woodrow’s exploits on the battlefield.  In a separate plot development, Libby reveals to Woodrow the fact that she is engaged to Noble’s son.  She is taken aback when he expresses relief at this.  ‘If you knew what kind of a heel I was, you’d be very happy,’ he says as he attempts to tell her the truth.  Confused by this, and by her own conflicting emotions, Libby is certain that Woodrow is telling lies in an effort to make her hate him.  In this respect – and with that of the crowd’s earlier reaction – Sturges is exploring the theme of misinterpretation and how individuals often misconstrue, or simply do not listen at all.  As with so many of his best films from this period, the dialogue of Hail the Conquering Hero is characteristically rapid-fire and often overlapping in terms of delivery; this serves to heighten Woodrow’s increasingly agitated state and also emphasises how events quickly overtake the individual in ways he has not allowed for or foreseen. 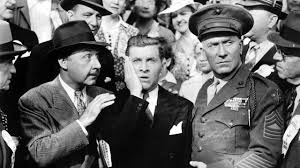 Elsewhere, in keeping with such an idea of unforeseen events, Noble and his campaign manager have decided to check out Woodrow’s story apropos his alleged service and deeds of heroism.  Woodrow himself seeks an out by concocting a phoney story of his being called back into limited service by the Marine base in San Diego.  He announces that he has agreed to this, but goes ahead nonetheless with a procession through town and a campaign rally at the community hall.  In the meantime Noble has learnt the truth of Woodrow’s medical discharge and seeks to expose him at this very same meeting.  But Woodrow beats him to the punch by delivering a heartfelt speech in which he unmasks himself as a ‘phoney.’  ‘The farce is over, the lying is finished,’ he tells the aghast crowd; ‘I was a thief because I stole your admiration…If I could reach as high as my father’s shoestrings, I would be justified…I’ve told you this because too many men have bled and died to live this lie.’  Woodrow determines to leave town and Libby – breaking off her engagement to Forrest – decides to go with him.  But, unseen to them both, the tenacious Heffelfinger delivers his own speech in which he tells the townspeople the true circumstances of the story.  The Sergeant and a large crowd turn up at the train station from where Woodrow and Libby are about to depart.  Two of the community leaders, Judge Dennis and Doc Bissell, inform Woodrow of how his courage in telling the truth has struck a chord with them all and is, in itself, an act of heroism.  They still want Woodrow to run for the office of mayor and in the film’s final few moments it seems evident that he will.  The six real heroes depart on the train as they are now required to return to service.  Now, one of the ordinary members of the community once again, Woodrow expresses his deep appreciation for what they have done, for what so many men like them have done in the theatres of conflict in Europe, Asia and other such territories – ‘I knew the Marines could do anything, but I didn’t know they could do anything like this,’ he tells them.  ‘You have no idea,’ one of them replies as the train pulls out of the station. 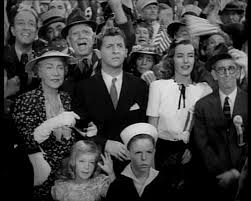 Made two years after the medically-themed biographical The Great Moment, but released just before it (The Miracle of Morgan’s Creek, which also starred Bracken, was similarly filmed in 1942, but not theatrically released until 1944), Hail the Conquering Hero was Sturges’s eighth film with Paramount Pictures and also their last respective collaboration.  The writer-director – whose contract with the studio expired with this film – was increasingly frustrated with the several conflicts with regard to matters such as editorial control and censorship which had plagued the productions of The Great Moment and The Miracle of Morgan’s Creek.  The studio had also made known its dissatisfaction at Sturges’s practice of using the same repertory of character actors in his films again and again; they feared a tired sense of familiarity setting in with these same faces.  Not surprisingly, the writer-director disagreed with them on this very issue pointing to how some of these fine actors had contributed to his string of successes.  The years (and eight films) at Paramount – which began with 1940’s The Great McGinty and concluded with Hail the Conquering Hero – were indeed Sturges’s richest period in terms of output and the general consent is that, artistically, he went into decline after Hero’s production.  As to that particular film itself, Hail the Conquering Hero is indeed a highly amusing, but interrogative and sharp satire, on the nature of hero-worship and the small-town mentality which allows this to take root.  Sturges’s sense of community values and the society he presents is not terribly dissimilar to that of Frank Capra’s – with especial regard to 1946’s It’s a Wonderful Life – and both directors suggest the inherent dangers of insular thinking which, when combined with unrestrained ardour, can serve to stifle the individual and send him down paths he would rather not traverse.  Sturges received an Academy Award nomination for his screenplay of Hero and there are some wonderful performances to behold here including that of Bracken, Raines (who had not been wanted by Paramount), Georgia Caine and Raymond Walburn.  Sturges’s second best film in my estimation after 1941’s Sullivan’s Travels, Hail the Conquering Hero probably belongs performance-wise to William Demarest who is a particular standout as Sergeant Heffelfinger.  Monty Python’s Terry Jones has referred to it as being ‘like a wonderful piece of clockwork.’  Fine words of summation indeed as regards this 1944 comedy classic.