Movie Retrospective: Hannah and Her Sisters 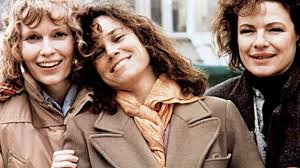 Woody Allen’s 1986 comedy-drama is for me his second best film after 1979’s peerless Manhattan.  As the very title suggests, this is a tale concerning family primarily, but there are a number of story arcs which also draw in several periphery characters.  Beginning with a simple title card reading ‘God she’s so beautiful!’ we are introduced to the character of Elliot (Michael Caine), a mild-mannered financial advisor who has developed an infatuation with one of his wife’s sisters, Lee (Barbara Hershey).  It’s Thanksgiving in the busy household and Hannah (Mia Farrow) is far too occupied with domestic chores to even notice Elliot lusting after her sibling.  Later that evening Lee returns to her older boyfriend Frederick (Max von Sydow), a reclusive artist who constantly rails at the world and, correctly, suspects that Elliot has a crush on Lee. 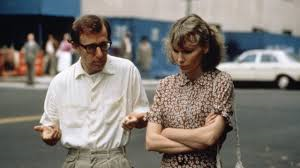 A further story arc is developed in the form of Mickey (Allen himself), a TV producer who is despondent with his career and the direction of his life generally.  He’s a hypochondriac as well who has an innate fear of mortality.  It’s a role which Allen has perfected over the years of course, but this is one of his own best personifications and performances.  Mickey was previously married to Hannah, but their marriage began to strain when they discovered he was infertile.  Despite the seriousness of this situation, Allen picks out a deft moment of humour when at the doctor’s clinic he suggests they seek a second opinion.  ‘This is the second opinion,’ Hannah reminds him in a whisper.  Mickey and Hannah do eventually have twins after she is artificially inseminated courtesy of his former production partner.  But, now, in the present day, Mickey is by himself and has regrets about such moments from the past.  Suspecting that he has a brain tumour (which does not prove to be the case), he undergoes an existential crisis.  A near suicide attempt later (the gun slips on his sweaty forehead) leads him to a moment of catharsis which – most appropriately for Allen – takes place in a movie theatre (the film playing incidentally is the Marx Brothers’ Duck Soup). 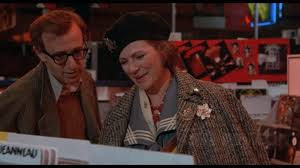 The other main arc in the story is centered on the third of the three sisters Holly (Dianne Wiest).  A woman who enjoys her substances, she has never truly found her path in life and fluctuates between unsuccessful acting auditions and a budding catering business.  Her best friend in both these endeavours is April (Carrie Fisher).  But April is two-faced and has no compunctions when it comes to competing for stage parts and love interests.  Enter a dashing architect named David (Sam Waterston) in this latter regard.  Allen – as we well know – has never been reticent about proclaiming his undying love for the city of New York and there is a wonderful sequence in this film as David takes Holly and April on a tour of the city to show them his favourite buildings.  To return to the story, Holly eventually comes second in the romantic stakes and considers taking some time out to try her luck at creative writing.  A chance meeting with Allen’s Mickey in a record store proves to be highly significant for them both. 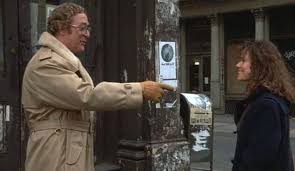 Elliot has an affair with Lee which lasts roughly from one Thanksgiving to the next (there are three such Thanksgivings in all during the course of the film – a deliberate narrative framing device employed by Allen).  They begin to meet in hotel rooms and engage in other such acts as subterfuge.  He professes a great personal satisfaction with the liaison as he has been finding Hannah’s manifestation of love somewhat smothering and difficult to reciprocate.  Tensions develop between the husband and wife, but Hannah never discovers the truth of the affair.  The dalliance eventually peters out and Elliot – like Mickey – has his own crucial moment in which he realises what is truly important.  In some ways Allen could be accused of resolving the complex issues in his narrative quite conveniently.  There are no scenes of confrontation here as such.  The principal characters find their way quietly and by self-analytic means.  By the time of the third Thanksgiving dinner lives have transformed, but not owing to familial feuds.  Elliot and Hannah are stronger than ever as Caine’s voiceover informs us; Lee, meantime, has got married; so too have Mickey and Holly.  The film’s final scene and piece of dialogue – as this latter couple gaze lovingly into a mirror – is an absolute gem and brings the story to a perfect conclusion.  See if you can avoid that lump in your throat as you watch it. 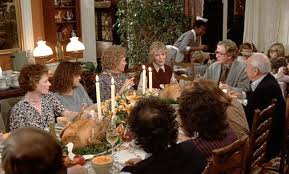 Allen has credited the structure of Hannah and Her Sisters to Ingmar Bergman’s Fanny and Alexander, which too employs the device of utilising successive family gatherings.  Visconti’s Rocco and His Brothers also has a bearing on the structure of the film with respect to the discrete sections of the film centering on principal characters and supporting players.  Set in New York City at various times of the year (an overall timeline of two years as I previously mentioned), Hannah and Her Sisters continues Allen’s love affair with that particular metropolis.  The cinematography of Carlo Di Palma ranges from the burnished hues of an Autumn day in Central Park to the eclectic mix of faded apartment buildings and dull-coloured shopfronts in Soho.  I already referenced that brilliant montage involving Waterston, Wiest and Fisher.  The New York portrayed here is a vibrant one inhabited by three-dimensional characters who mostly arrive at some deeper, more resonant, understanding of life by the film’s end.  Even Hannah’s sometime-sparring parents, themselves former actors, are shown to have reached a point whereby they appreciate each other in spite of former resentments and personal shortcomings.  Hannah and Her Sisters is ultimately a celebration of life in spite of the human condition, which is shown to be fallible, yet enduring.  As Mickey observes towards that beautiful ending, ‘The heart is a very, very resilient muscle.’ 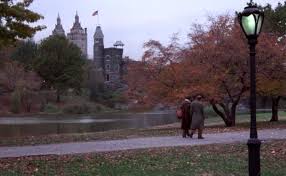 It wouldn’t be a Woody Allen film of course without some wonderful dialogue and the writer-director deservedly won an Oscar for Best Original Screenplay at the 59th Academy Awards.  In one particularly hilarious scene Mickey and Holly are revealed to have gone out on a disastrous date some years before when she was a cocaine addict and he was brimful of stresses and anxieties.  They wind up in a club where he doesn’t appreciate the heavy metal music.  ‘I love songs about extraterrestrial life, don’t you?’ Holly observes to him.  ‘Not when they’re sung by extraterrestrials,’ he replies dismissively.  Seeing her off later in a cab he sarcastically thanks her for the date – ‘I had a great evening.  It was like the Nuremberg Trials.’  For her performance as Holly, Dianne Wiest won the Best Supporting Actress Oscar at the Academy Awards; Michael Caine won his first Best Supporting Actor Oscar as well.  In total Hannah and Her Sisters received seven nominations at the Oscars, but lost out on Best Picture to Oliver Stone’s Platoon.  To my mind it should have won.  It was that year’s best film.  Other notables in the supporting cast include Richard Jenkins, Daniel Stern, Julie Kavner, John Turturro, Julia Louis-Dreyfus and Lloyd Nolan.  Former Tarzan star (and Mia Farrow’s real-life Mom) Maureen O’Sullivan plays the boozy matriarch of the extended clan.  Hannah and Her Sisters is one of the very best of its kind from the 1980s.  It has a perfect blend of humour, poignancy and dramatic flourishes with uniformly terrific performances and represents a high point for Woody from this particular period.  Check it out and fall in love with New York City and its inhabitants all over again.