This supernatural western of 1973 is notable in the first instance for being Clint Eastwood’s first film in the genre in the dual roles of star and director.  The Californian native had made his directorial debut with the excellent 1971 psychological thriller Play Misty for Me, and so High Plains Drifter offered an opportunity for him to further his range behind the camera.  As the central character of the film, the iconic actor is once again the stranger without a name.  The opening credit sequence has him emerge in the desert like a mirage as he rides towards the small mining town of Lago.  The imagery is stark and the dialogue sparse.  The stranger enters the mining town surveying its infrastructure and its community.  There is an aura of a returning member as his mount steadily makes its way through the main street.  But has he been here before?  Is he someone the townspeople may recognise although they are hesitant to acknowledge as much? 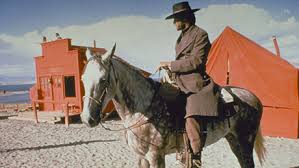 High Plains Drifter serves as part mystery, part ghost story, part frontier tale.  The stranger may in fact be Marshal Jim Duncan who was savagely whipped to death by a bunch of outlaws as the townspeople callously looked on and did nothing.  The reason for their actions, or lack of action, and even complicity, was commercial.  Duncan had discovered that their precious mine was on government lands and, therefore, not their rightful property.  His killers were subsequently arrested themselves, but now they too are returning and hell-bent on their own form of revenge. 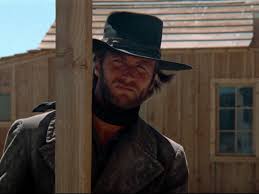 Ernest Tidyman, who’d recently won an Oscar for Best Adapted Screenplay for The French Connection, contributed the tight script which captures the oft-brutality of frontier life.  The environment the writer and director place us the viewer in is an extremely harsh one in which the rights of the individual are all too often swept aside in the name of so-called progress.  For the streetscape of the film itself, Eastwood had an entire town built on location on the shores of Mono Lake, California.  The constructed buildings were so authentic in fact that they allowed the filming of interior scenes within.  Clint Eastwood throughout his career has amassed many fine reputations as both actor and director, and one of these as the man behind the camera is his consistency in bringing films in ahead of time and under budget.  Such indeed was the case with High Plains Drifter. The resulting film was a box-office success and actually ranks as the sixth-highest grossing western in the United States in the 1970s.  It was quite rightly critically acclaimed for its direction, tight pacing and fine cinematography, amongst other things, but it is interesting to note that not all who saw it concurred with such an assessment.  Shortly after the film’s release, Eastwood received a letter from one John Wayne who was not best pleased by what he’d seen.  An extract from this more than reveals his mind-set on the piece: ‘This isn’t what the west was all about.  This isn’t the American people who settled this country.’  To the best of my knowledge Clint did not see fit to issue a response.

If you so happen to be approaching this very fine western (and morality tale let’s face it) for the very first time, then I’d also suggest the director’s 1985 Pale Rider as a worthy accompanying piece.  Pale Rider is quite similar in tone and milieu and has more than a few things to say about the commercialisation of the land the settlers have come to inhabit as well (the later film has some pointed shots and comments to make on the subject of strip mining).  It also goes a little further than High Plains Drifter in its suggestion that the central character of the Preacher (played of course by the great man himself) may in fact be an avenging angel of sorts; this is most especially suggested in the climatic gunfight scene when the character of Marshal Stockburn clearly recognises the Preacher.

In one piece of on-set mirth (a nice in-joke if you will) Eastwood had two headstones in the town cemetery (significantly located on the outskirts) bear the names of Sergio Leone and Don Siegel, two directors who significantly influenced and played a part in his career, and to whom he would later dedicate his Oscar-winning Unforgiven.

One further piece of trivia I’d personally like to throw in concerns the director’s little-seen Breezy of the same year (I only saw it for the first time myself in recent weeks and it’s not half-bad).  Aside from making a Hitchcockian-type cameo appearance in that film (he’s the one leaning on a pier as William Holden and Kay Lenz walk by), Eastwood also features a shot of a poster publicising High Plains Drifter in the scene in which the unlikely couple go to the cinema.  It proves the great man has a good sense of humour about him.  And his first western behind the camera was a telling portent of great things to come.