Movie Retrospective: In the Bedroom 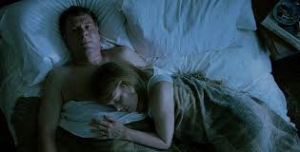 Todd Field’s superb 2001 film is a telling examination of loss and grief, and also the extreme acts such emotions can provoke in individuals.  Based on the excellent 1979 short story Killings by Andre Dubus, the film relates the story of Matt and Ruth Fowler (Tom Wilkinson and Sissy Spacek) who have an only child Frank (Nick Stahl) who is currently residing at home, possibly going to graduate school in the fall, but dating an older woman Natalie (Marisa Tomei).  Natalie has two small sons and is separated from her husband Richard Strout (William Mapother) who is increasingly seeking to insinuate his way back into their lives.  He views Frank as a barrier to this and it’s not long before his short temper is fully provoked. 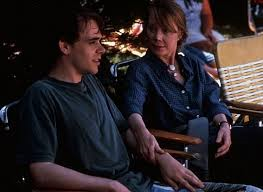 Ruth is justly concerned at this, particularly one night when Frank returns home with a blackened eye.  Matt, on the other hand, believes that the affair between his son and the attractive Natalie will peter out as the summer wanes.  There are several suggestions that he is, in some way, living vicariously through his son and envies him this highly-desirable woman.  We see himself and a friend admire Natalie at a barbeque; on another day Matt returns home early for lunch and discovers that Frank and Natalie have been making love in the family house.  Matt is also continuously visiting Frank at his boat which the latter notes.  The boy is considering remaining in the mid-coast town and working in the fishing industry.  He is pretty much sure he is in love with the older woman.  He certainly adores her two small boys. 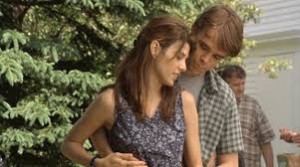 Then, of course, matters take a tragic twist.  Richard shoots Frank during a domestic altercation and the boy dies.  Matt and Ruth are left to confront the emptiness in their house, in their lives.  They seek to deal with it by different means.  Matt, a doctor, (one of the several differences between this and Dubus’ short story) returns to his practice quickly.  Ruth, a school choir director, stays at home smoking cigarettes and staring blankly at the TV.  When she does return to her work, Natalie turns up to express her sorrow at Frank’s passing.  The older woman strikes the mother-of-two in one of the film’s most shocking moments.  The case against Richard Strout has not gone so well either as far as the devastated couple are concerned.  Richard is out on bail and his trial is several months away.  Natalie’s testimony of the events of the day has not helped matters either.  It appears likely that Strout may get away with manslaughter and serve perhaps only five years, something that is abhorrent to both Matt and Ruth.  When the latter sees Richard in a convenience store, she is visibly shocked and outraged at how her son’s killer can walk the streets with a seeming degree of impunity.  An affecting confrontation scene between Matt and Ruth ensues in which they accuse each other in some way of Frank’s death.  Ruth, quite correctly, observes that Matt was quietly proud of the boy on account of his summer fling and let him get away with too much generally.  Matt accuses her of being too controlling, and much too constrictive in the way she is processing the loss of their son. 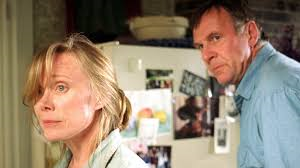 The performances in this particular scene by the lead actors are top-drawer as they are throughout this quietly powerful film.  Ruth tells Matt that she has seen Strout that very same day and that he ‘smiled’ at her.  This is something of a lie on her part as in fact Richard did not smile, but rather left the store awkwardly and in some hurry.  But it has the desired effect and leads to the film’s final act, in which Matt abducts Strout on the premise that he wants him to jump bail and never return to the small town.  ‘My wife keeps seeing you,’ he tells Strout, as per the short story.  ‘We can’t have that anymore.’  Matt is aided and abetted by his best friend Willis, who, in a previous scene, had stated how much he hated Strout.  Matt takes Richard to his friend’s wooded property where Willis is waiting for them.  But it’s not so that his friend can keep Richard until it’s time for his flight and departure.  In the Bedroom becomes a story about revenge in its eventual denouement and it more than hints at the final emptiness this act bestows.

This is a wonderful film as I said, and it more than stands up to repeated viewing.  Tom Wilkinson and Sissy Spacek have never been better and they are ably supported by the likes of Nick Stahl and Marisa Tomei.  Director Todd Field expands upon his source material to great effect and the changes and narrative embellishments he adds to this in no way jar with the themes explored.  An actor himself, Field demonstrates his ability to elicit great performances, and he would do so again with 2006’s Little Children which starred Kate Winslet and Patrick Wilson.  It’s a real shame, however, that he hasn’t made a feature film since this time, and, personally-speaking, I hope he does return to behind the camera at some point in the not-too-distant future.  His 2001 film deservedly received five Oscar nominations, including nods for the central performances of Tom Wilkinson and Sissy Spacek.  It remains a quietly powerful film, as I’ve noted above, and if you haven’t already seen it, then it comes highly recommended by this reviewer.