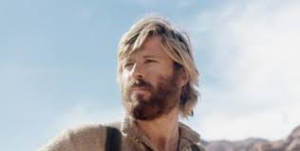 ‘They say he wanted to be a mountain man,’ an off-screen narrator tells us at the beginning of Sydney Pollack’s excellent 1972 film Jeremiah Johnson starring Robert Redford.  Based in part on the life of mountain man Liver-Eating Johnson, this is a story about an individual who wishes to escape the trappings and concomitant vagaries of civilisation as much as he wishes to forge an existence for himself.  Johnson is a Mexican-American war veteran who has seen too much and longs to dispense with such events and much of his personal past.  But – like so many other men with grandiose visions – he doesn’t quite appreciate what it will take to sustain himself in this unforgiving wilderness.  An unsuccessful trapper at first, Johnson is shown trying desperately to catch a fish on the snow-laden bank of a river.  He comes across the body of a dead man named Hatchet Jack who has been killed by a bear.  A providential consequence of this otherwise grim sight is Johnson’s acquiring of Hatchet’s .50 caliber Hawken rifle which its owner has bequeathed to whoever should find it.  It’s a telling indication that life on the frontier is full of danger and, a short time later, when Johnson meets ‘Bear Claw’ (Will Geer), the latter confirms as much by calling him a, ‘dumb pilgrim.’  ‘Bear Claw’, who hunts grizzly bear, is an eccentric but endearing character and he takes it upon himself to teach Johnson some of the skills he needs to prosper in the wild the best way he can – ‘Whatever you learnt down on the flat will do you no good up here.’ 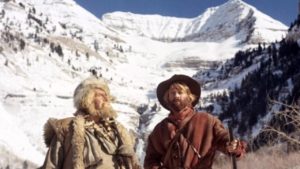 Johnson soon becomes quite proficient as a hunter and more in harmony with his new environs.  An encounter with Crow Indians is the occasion for his introduction to Paints His Shirt Red (Joaquin Martinez) and Johnson is shown sharing pipe with him.  Determining to head out on his own, Johnson leaves ‘Bear Claw’ confident that he has acquired enough know-how to survive whatever the country may choose to throw up at him.  Unexpectedly, he encounters the aftermath of a massacre which has left a family dead save for the mother and her young son.  ‘Woman I am your friend, we have graves to dig,’ Johnson tells the distraught mother who continues to mourn her loss.  She instructs Johnson to take the boy (who does not speak) with him and he does so naming the youngster Caleb.  Soon afterwards, Johnson and Caleb come upon another mountain man who has been buried up to his neck in sand by Blackfoot warriors.  Del Gue (Stefan Gierasch), whose horse and gun have been taken, is rescued by Johnson and he convinces him to pursue the Blackfeet.

One of the most striking aspects of Jeremiah Johnson is, of course, its peerless photography by director of photography Duke Callaghan.  The film – which began principal photography in early 1971 – was shot entirely in Redford’s adopted state of Utah and it makes magnificent use of locations such as Zion National Park, Ashley National Forest and Snow Canyon State Park.  The powers-that-be at Warner Brothers had wanted the film to be shot on the backlot of the studio for monetary reasons, but star Redford and director Pollack succeeded in convincing them that the look and feel of the western film would be greatly enhanced by a location shoot.  Such an approach pays sizeable dividends indeed as we watch ensuing scenes involving Johnson, Caleb and Del Gue as they are captured by Flathead Indians and taken back to their camp.  Johnson learns that these natives are essentially ‘Christian Indians’ who have been educated by French missionaries.  In a somewhat naive gesture, Johnson gives the chief Two-Tongues a gift, an act which obliges an even better return on the part of the warrior-leader.  Two-Tongues presents Johnson with his daughter and the mountain man, realising he has no choice, reluctantly accepts.  An unlikely family unit is formed in the guise of Johnson, Caleb and Swan (Delle Bolton).  As he moves on again, Johnson’s face is one of complaint at the notion that he has company and responsibilities he had never envisaged.  This section of the film is somewhat reminiscent of Eastwood’s The Outlaw Josey Wales in which the titular character is similarly irked by the community he collects through circumstance as the story develops.  Whereas Josey is still plagued by the loss of his family, and hell-bent on revenge, Jeremiah is more bemused at his gain as he tries to be right-minded and noble.  The inedible food which Swan makes for him and the boy provides Jeremiah Johnson with some of its more amusing moments.  Eventually settling on a spot in the glorious countryside, Johnson constructs a cabin for the three of them and domestic bliss seems to beckon.  A residual danger still exists on the frontier and we are reminded of this when Johnson is attacked by a pack of wolves.  But his life generally seems set now as he grows closer, and more intimate, with Swan and instructs Caleb in his chores.  Were the film to end at this point, I think we would have a perfectly satisfactory snapshot of life in the wilderness and one man’s discovery of his destiny.  But Johnson’s story is not complete and fate is not nearly done with him yet. 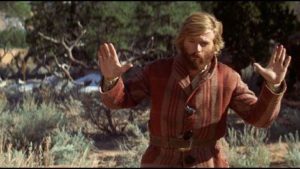 A sense of foreboding is impossible to avoid when Johnson agrees to assist the U.S. Cavalry to rescue a stranded wagon train of settlers.  Unenthusiastic about leaving Swan and Caleb, Johnson sets out with the troops and protests some time later as they traverse a sacred Crow burial ground.  Unable to shake an ominous feeling in his own mind, Johnson hurriedly returns to the cabin where he finds the dead bodies of Swan and Caleb.  Turning his back finally on the dreams and notions of a settled family life, Jeremiah symbolically burns the cabin with Swan and Caleb laid out inside.  He exacts revenge on the Indians he holds accountable for the deaths of his loved ones and survives subsequent attempts by the Crow on his own life.  ‘Maybe you best go down to a town, get out of these mountains,’ a returning Del Gue suggests after another attack has taken place.  They part company and Johnson speaks obliquely of going to Canada.  A montage of sequences which follow chronicles his exchanges with the Indians.  A legend surrounding him grows and his native adversaries come to respect, even venerate him.  This is apparent in the scene in which Johnson returns to the cabin where he first met Caleb.  ‘You’re him,’ the settler who now resides there says as he recognises Johnson.  He shows Jeremiah a site festooned with trinkets and talismans which the Indians have constructed in his honour.  An inkling of peace and peace-of-mind grows as Johnson meets ‘Bear Claw’ once again.  ‘You’ve come far pilgrim,’ the wily old hunter says as he too expresses his admiration.  Johnson has become something of an enigma and, in spite of such high regard, it is evident that he will never return to civilisation – he may in fact now spurn attachments entirely.  ‘Would you happen to know what month of the year it is?’ he enquires of ‘Bear Claw.’  ‘You’ve done well to keep so much hair when so many is after it,’ the latter remarks as he departs once again leaving the isolated Johnson in his wake.  Jeremiah Johnson concludes on something of an optimistic note as its central character encounters Paints His Shirt Red one last time.  The two horseback-warriors size each other up as if ready to do battle.  Reaching for his weapon, Johnson is surprised as he sees the Indian raise his open palm in a gesture of peace.  Johnson reciprocates with a similar gesture.  The image freezes on him as he duly passes into history and legend.

This is one of Redford and Pollack’s most memorable collaborations.  The actor and director made a number of films together, particularly in the 1970s, but Jeremiah Johnson is one of their respective best.  I spoke previously of the stunning work by Duke Callaghan, but kudos also to Pollack and Redford themselves.  The actor was a huge name following his breakout year of 1969 (Butch Cassidy and the Sundance Kid, Downhill Racer, Tell Them Willie Boy Is Here) and it was undoubtedly such star power that helped get Jeremiah Johnson made in the first place.  It’s a fine performance by Redford and he’s well supported by his fellow cast members.  The decision to shoot in Utah was a decisive one with respect to the film’s success because the environment of Jeremiah Johnson is effectively a character in itself, tender and severe in equal measure.  Pollack spent a great deal of time in post-production and credited the film’s fine critical reception to this as much as the time spent on location – ‘It’s a picture made out of rhythms and moods and wonderful performances.’  This is indeed true and Jeremiah Johnson represents a creative collaboration at the very height of its power.  Haunting and not just a little evocative.