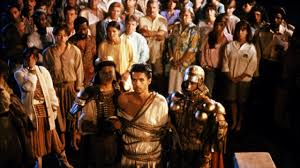 The 1989 French-Canadian film Jesus of Montreal, concerning a contemporary staging of the Passion Play, is at once a wonderful allegory on the very story it depicts as well as a telling study on matters such as pop culture, materialism and the conservative proclivities that weigh upon a specific institution.  We are first introduced to the character of Daniel (Lothaire Bluteau) as he is greeted by a fellow actor at a performance of a play.  Asked about his next role, Daniel replies that he has agreed to take on the role of Christ, but requires inspiration for the part.  Daniel subsequently meets with Father Leclerc (Gilles Pelletier), the pastor of a Roman Catholic site in the Canadian city of Montreal.  Leclerc explains that the Passion Play has been staged on the grounds for some 35 years, but now requires a touch of modernisation.  Spotting an actress he knows in a video of a previous performance, Daniel determines to persuade her to join this new iteration.  Writer-director Denys Arcand posits an early allusion to Christ as Daniel seeks out Constance (Johanne-Marie Tremblay) in a food shelter.  ‘I’ve come for you,’ he tells her when she enquires as to the reason for his unexpected arrival.  There are references in the following scene to Daniel having lived abroad for a number of years without any of his friends or colleagues seemingly aware of what he was doing.  He tells Constance that he is living around now in the vaguest possible terms.  The latter insists that he move in with her for the immediate future. 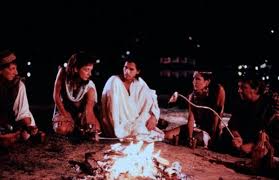 Throwing himself into the task at hand with great zest, Daniel begins to research the part of Christ drawing upon some newly-uncovered texts and fresh theories.  Arcand interposes another humorous scene in a public library as a diligent librarian asks the actor if he is looking for Jesus.  Daniel replies in the affirmative, to which she responds, ‘It’s he who will find you.’  A more pointed revelation comes to Daniel’s attention when he discovers that Father Leclerc is sleeping with Constance.  ‘I’m not a very good priest,’ the cleric admits before explaining how and why the material comforts of his profession have informed his decision to remain in the garb.  Constance also refers to this particular consideration of his when she mentions the ‘big flat’ he owns.  Two male actors (read apostles here) who are providing voice-over in very different settings are recruited by Daniel and the casting of the play is advanced.  Mireille (Catherine Wilkening) a young actress and model who is seeking to spurn her past of frivolous advertising work also joins the troupe as a kind of latter-day Mary Magdalene.  The film soon transitions into excerpts from the very play itself as Christ (Daniel) is presented before Pontius Pilate.  Other moments which Arcand chooses to pick out from his ministry include his walking on the water and healing a blind woman played by Constance. 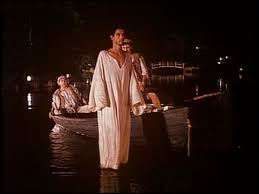 The play is met with great public and critical acclaim, but is not to the liking of Father Leclerc who balks at this unconventional interpretation and, most especially, some of the ideas it proposes.  ‘Are you out of your mind?’ he asks Daniel prior to elaborating on his own position vis-a-vis the board of trustees he must answer to.  One of the central themes of Jesus of Montreal is that of the artist seeking to realise and perfect his work in the face of an intractable edifice.  Arcand himself is a self-proclaimed atheist and once stated in an interview that his intention here was not to make a religious film, but rather to explore the story of the Passion as a ‘metaphor of an artist and his struggles and temptations.’  Leclerc is not a good priest as he puts it, but he nevertheless feels the power of the institution he represents and the danger of appearing to accept new theories and radical arguments.  He is self-serving but also an arm of this conservatism.  He threatens to cancel the play on the basis of the extreme poetic licence Daniel has taken with this adaptation of his. 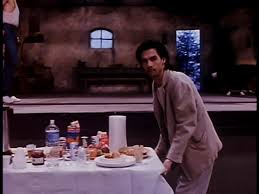 The similarities between Daniel and Jesus become more apparent with the allusion to the Cleansing of the Temple.  Accompanying Mireille to a casting audition which involves her ex-boyfriend, a pompous director, Daniel flies into a rage at the treatment she receives and destroys television and video equipment.  He chases the corporate clients from the theatre calling them a ‘pack of dogs’ in a similar vein as Christ did with the merchants in the temple.  Daniel is arrested on the charge of aggravated assault and vandalism and is interviewed by a psychologist who has been directed by the court to assess him.  ‘Are you sorry you were born here?’ she asks pointing out that if he’d been born in Santa Barbara or California, he might well have realised a more stable and financially-lucrative career.  Arcand has great fun with one of the film’s most clever scenes in which a very slick lawyer (read Satan tempting Jesus in the desert here) looks out over the city of Montreal with Daniel and offers him star-making platforms such as media space and time on talk shows.  ‘I’m just trying to show you that with your talent this city is yours if you want it,’ he informs the actor.  The joke is played out perhaps a little too much when he orders Virgin Mary aperitifs in the nearby restaurant (as well as Magdalen lobster), but one can forgive Arcand in this respect for one of the film’s very best moments and an astute piece of allegory. 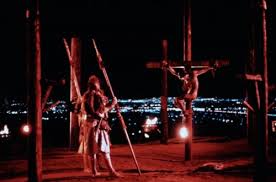 As feared by Daniel and his fellow actors, Father Leclerc decides to cancel the play citing his own grievances with the adaptation, as well as those of his superiors (‘Institutions last longer than individuals’).  The five actors decide to perform one final time in spite of this, but matters get out of hand when a semi-riot occurs and the crucifix on which Daniel hangs is upended.  Suffering a serious head injury as a result of this accident, Daniel is taken to a Catholic hospital, but discharges himself thinking that a good night’s sleep is all that is required.  He collapses in a subway station and is then taken to the Jewish General Hospital where he is put on life support.  The allegorical undertone of Jesus of Montreal comes full circle as Daniel’s body is harvested for the healthy organs his friends agree to donate (fittingly too, a thunder-and-lightning storm rages over the city as the surgeons work on his brain-dead body).  Daniel is symbolically resurrected in the film’s final scenes as a blind woman sees again with his eyes; an older man also wakes up with his much younger heart. 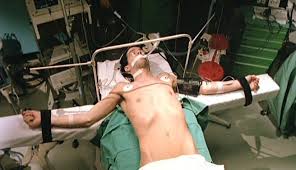 Winner of the Jury Prize at the 1989 Cannes Film Festival, and nominated for Best Foreign Language Film at the 62nd Academy Awards (it lost out to Italy’s Cinema Paradiso), Jesus of Montreal is a highly evocative work which repays many viewings, particularly with regard to some of those allusions I’ve just mentioned.  Canadian actor Lothaire Bluteau is appropriately enigmatic in the central role and he’s more than ably supported by the likes of Wilkening, Tremblay, Remy Girard and Robert Lepage.  Arcand – who would go on to win the Oscar for Best Foreign Language Film for 2004’s The Barbarian Invasions – deftly balances his direction and script with some fine flourishes of humour and thoughtful insights on themes of artistic individuality, institutional intransigence and the juxtaposition of the secular world (with its attendant pop culture and predilection for worldly possessions) with that of the religious.  An absolute gem worth watching regardless of your religious persuasion.