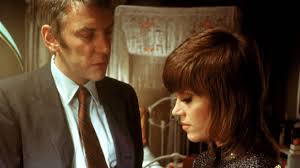 The 1971 Alan J. Pakula-directed film Klute is not so much a film noir or a thriller, but rather an insightful character study which manages to get under the skin of its central character revealing her essential strengths, flaws and vulnerabilities.  Starring Jane Fonda as Bree Daniels – a call girl working in New York City – and Donald Sutherland as the titular John Klute – a Pennsylvanian detective – Klute is one of several films released in the early 1970s which reflects the new wave in American cinema begun with 1967’s Bonnie and Clyde.  This is a progressive cinema verite in which the consideration of a previously taboo subject matter is quite frank and without restraint.  The issue of sexual relations is discussed openly and is never concealed.  Mostly set in an urban milieu, Klute is also realistic in terms of its depiction of modern city life and the individual’s place in such an ever-changing environment.  The part that modern technology plays in such a world is addressed at an early juncture (over the opening credits to be precise) as we hear Fonda’s character’s voice on a tape recorder as she seduces a client over the telephone.  The recording of such messages and the potential implications for the private life of the individual was a theme which films of this era – including Sidney Lumet’s The Anderson Tapes (1971) and Francis Ford Coppola’s The Conversation (1974) – sought to address.  In Klute, the recordings of Bree are used as both a leverage tool and also for more carnal purposes.  What effect does this have on the person in question we ask ourselves.  Are these audio tracks demeaning to her in some way? 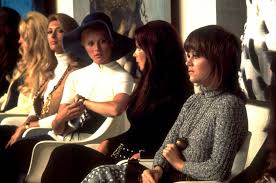 In the opening preamble of the film we learn of the disappearance of a prominent Pennsylvanian executive by the name of Tom Gruneman (Robert Milli).  The only clue to his whereabouts is an obscene letter discovered in his office which is addressed to a call girl in New York City – Bree Daniels.  Six months after Gruneman’s puzzling departure, family friend and detective John Klute is hired by one of Gruneman’s colleagues Peter Cable (Charles Cioffi) to assist in the on-going investigation.  Renting a sparse apartment in the basement of Bree’s building, Klute taps her phone and surveys her closely as she goes about her daily activities, which includes turning tricks.  An aspiring actress and fashion model, Bree uses her skills as part of her repertoire for certain clients (such as the older gentleman Mr. Goldfarb who owns a garment factory); at an opening stage of the film, she describes this to her psychiatrist as follows – ‘For an hour I’m the best actress in the world, the best fuck in the world.’  Neither a femme fatale (‘I’m a nervous broad’), nor a damsel-in-distress, Bree is an altogether complex woman who is both street-smart, independent and fiercely determined to retain the freedom to make her own choices.  When she learns that Klute has been taping her sexually explicit phone conversations with certain clients, she flies into a justified rage.  The fact that this prying detective has possession of the tapes in question implies a hold (even a degree of control) over her and Bree does not appreciate this.  She has gone out on her own as she subsequently explains and no longer has a pimp.  The desire to empower herself is Bree’s central motivation in this regard and any act or suggestion which interferes with this enterprise is abhorrent to her. 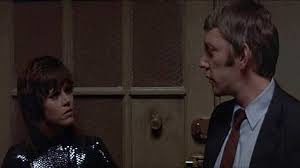 But even a woman of Bree’s resolve needs protection when threatened.  Beaten up by a john some two years before, Bree is unable to identify Gruneman as her assailant.  She thinks the man may have been older, but cannot be absolutely sure.  After Klute detects a shadowy figure spying on her in her apartment, he persuades Bree to meet with her former pimp Frankie Ligourin (Roy Scheider) in order to discover who had passed on the abusive client.  A fellow call girl by the name of Jane McKenna is mentioned by Ligourin who he claims was jealous of Bree.  But McKenna has apparently committed suicide and the search switches to another girl called Arlyn Page.  In the meantime, a notable plot development is the burgeoning relationship between Bree and Klute which is tentative to say the least.  Still desirous to maintain her sense of autonomy, Bree realises that she depends on the detective for her own protection and feeling of well-being.  After she seduces him, there is an innate feeling of empowerment on her part, yet this is also tempered by a confused reaction as to the nature and extent of the affair – ‘I feel the need to destroy it’ she tells her psychiatrist during the course of one of their sessions.  ‘I want to go back to the comfort of feeling numb again and in control.’ 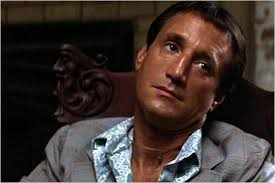 Arlyn Page is eventually located by Klute and Bree, but is unable to shed any light on the slightly older gentleman who had a violent disposition as regards the sexual act.  When Page’s lifeless body subsequently turns up on the docks, this appears to offer Bree further validation for choosing the steadfast Klute as her protector.  The detective watches over her like a dutiful custodian when she temporarily slips back into a substance addiction – ‘He took care of me’ Bree tells her psychiatrist in a moment of confidence approaching tenderness.  But still she fights these impinging emotions – ‘I wish that I didn’t keep wanting to destroy it.’  A short time later – more pointedly – she asks Klute if he is going to get hung up on her.  It serves as a warning on her part; a portent of how their possible future together might play out.  Nevertheless, a seemingly idyllic scene follows in which the couple go shopping for groceries.  It’s tender by its very nature and shot in an almost dreamlike manner (by famed cinematographer Gordon Willis), but can this quality be sustained in a story of this type we ask ourselves.  The answer seems to be no because Bree’s apartment is found to be ransacked on their return.  An abiding strain of unease permeates Pakula’s film at all times and informs the audience’s concern and empathy for Bree.  Just as her life appears to be changing for the better, the director and screenwriters (Andy Lewis and Dave Lewis) pull us back into the murky world of the vast city, replete, as it is, with hidden dangers and dark impulses.  Often described as the first of Pakula’s paranoia trilogy (it was followed by 1974’s The Parallax View and 1976’s All the President’s Men), Klute is a film which constantly reminds the viewer of the fact that the modern world (urban setting most especially) is a place fraught with peril and laden with all manners of temptation.  Bree is shown to be a woman hovering on the very precipice of this.  Despite the strong conviction of her character, we fear that if she falls, or surrenders herself entirely to this universe, then her fate is uncertain, her prospects in the balance at best. 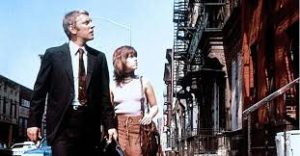 The mystery element of the film is resolved as Peter Cable is revealed to be the true culprit behind the deaths of Arlyn Page and Jane McKenna and disappearance/murder of Tom Gruneman.  Klute traces the obscene letters to his supposed employer and attempts to expose him by asking him for an additional $500 to purchase the black book of Jane McKenna which contains the names of her clients, including the one who had physically hurt Bree.  A rather interesting scene which takes place in the interim involves an uncharacteristically infuriated Klute beating up Frankie Ligourin at Bree’s apartment and being almost stabbed by the latter with a pair of scissors.  Is this Bree’s final manifestation of her own self-determination?  Is such a violent lunge representative of her deep-seated resistance to the detective and the relatively settled life he can offer her?  Only time will tell and we the audience will not get the answers to such questions because the final showdown with the real killer Peter Cable (which takes place at Mr. Goldfarb’s garment factory) ends with his death and the apparent reconciliation of Bree and Klute.  An epilogue suggests that Bree is leaving the city with Klute in an effort to embrace a more calmer and stable life, but the long-term future of the character is certainly debatable at the end as acknowledged by her final session with her psychiatrist – ‘I’ve no idea what’s going to happen…maybe I’ll come back…you’ll probably see me next week.’  In my own estimation, this is a clear indication on the part of the filmmakers that Bree remains a self-sufficient character with options, entirely free to make her own decisions.  Whether this new life of hers will work out in the long run is really of secondary importance.  Bree is still a spirited woman without constraints who can go where she wants and do what she pleases.  She is liberated in spite of the veneer of a commitment to her new partner.  Perhaps, indeed, she will return next week or at some point in the future. 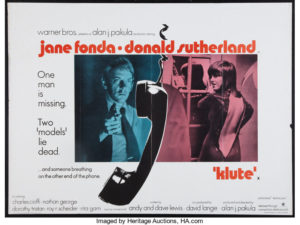 Jane Fonda won her first Oscar for Best Actress for this film at the 44th Academy Awards (beating out Julie Christie, Glenda Jackson, Vanessa Redgrave and Janet Suzman).  Her Bree Daniels is certainly one of the most memorable female characters of 1970s American cinema and Fonda’s performance is pitch-perfect.  It’s amazing to think that she had serious doubts about her own ability to play the part (believing she was not ‘call girl material’) and – in fact – encouraged Alan J. Pakula to consider someone else such as Faye Dunaway.  To his credit, the late director stuck by his leading lady and the result was a performance of some depth which remains one of Jane Fonda’s very best.  She would go on to win a second Best Actress Oscar later in the same decade for 1978’s Coming Home.  Fonda is very well supported by Donald Sutherland and other cast members which include Vivian Nathan as Bree’s psychiatrist.  For these particular exchanges in Klute, Pakula shot approximately 90 minutes of footage – six minutes of which appear in the final cut of the film.  It was Fonda who suggested that the gender of this particular character should be female and one might also suspect that she appreciated the distinct irony contained in the very title of the film.  Although it’s named after Donald Sutherland’s detective character, it’s quite evident that this film is principally about Bree Daniels in just the same way that Jane Fonda’s tour-de-force performance is its most distinctive feature.  Her Bree is the heart and soul of this fine film which is more than just a conventional thriller or a film noir for that matter.