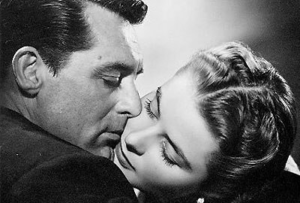 ‘This is a very strange love affair,’ Ingrid Bergman’s Alicia Huberman remarks to Cary Grant’s T.R. Devlin at an early moment in Alfred Hitchcock’s 1946 Notorious.  ‘Why?’ Devlin enquires.  ‘Maybe the fact that you don’t love me,’ she replies.  This is one of the central themes of the director’s mid-1940s spy movie – does Devlin care for Alicia at all or is the relationship merely a ruse to further persuade her with regard to the pending mission?  The couple are in Rio awaiting further instructions from Devlin’s superiors.  He is a government agent intent on the particulars of his assignment.  She is the American daughter of a Nazi spy who was recently convicted and, subsequently, committed suicide in prison.  Hitchcock introduces Grant’s character in a most interesting way.  Shot from behind at a party being hosted by Bergman, we do not see the actor’s very recognisable face until later in the scene when he and Alicia chat.  And then there’s that memorable shot of him the following morning as a hungover Alicia awakens.  Hitchcock presents him here entirely from Alicia’s perspective – a shadowy figure standing in the doorway at a distinct angle.  This is playing off Grant’s star power, but it also suggests the rather sordid nature of the mission which Alicia will be asked to undertake.  The quarry is an old acquaintance of her father’s, Alexander Sebastian (Claude Rains), who we learn had quite a crush on her in the past which was not reciprocated.  ‘When do I go to work for Uncle Sam?’ she asks as the exact nature of her task becomes evident.  It’s quite clear that the mission is far from endearing to her and to Devlin.  For his part, he attempts to convince his superiors that Alicia is not up to it.  But when they decide otherwise, Devlin is instrumental in engineering Alicia’s meeting Sebastian (causing her horse to bolt so that the latter will rescue her).  Again, here, Hitchcock is returning to the theme of service and duty in the face of repressed passion and love.  He will come back to it several times during the course of the film.

The trick works, of course, and Sebastian is suitably baited.  He is one of a group of probable Nazis who have relocated to Brazil in the aftermath of WWII.  But he has a weakness for Alicia which Devlin’s superiors are all too aware of and Alicia herself is not so slow to exploit.  At the racetrack – as referenced above – Alicia informs Devlin that, ‘You can add Sebastian to my list of playmates.’  This is to make him jealous naturally and also to provoke a response.  But there is a moral issue posed here as well – Alicia has effectively been delivered into a situation where her mind and body are utilised to serve an end.  And what exactly is Devlin’s position in all of this?  If he does love her, then how can he bear to see her with another man – one who is quite a bit older than herself?  At the racetrack Sebastian himself notices a certain rapport between the two and remarks on this to Alicia – ‘Would you care to convince me Alicia that Mr. Devlin means nothing to you.’  The insinuation behind these words is quite clear.  And matters become further complicated when Alicia reports that the besotted Sebastian has asked her to marry him.  Grant’s superiors believe that this is a good idea as it will solidify Sebastian’s trust in her.  It is evident though that Devlin himself is not so happy at this development.  Whilst it progresses the mission, it also serves to position Alicia at a further remove.  Perhaps she will choose to remain with Sebastian now, whose love and commitment to her is whole despite the reservations of his domineering mother (Leopoldine Konstantin).  We will return to this figure later as this is a character type who also informs the director’s Psycho, The Birds and Marnie. 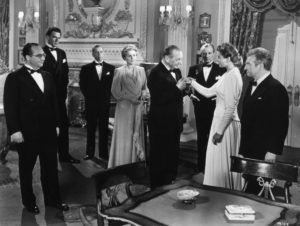 A previous scene involving a wine bottle has suggested that there are indeed matters afoot in Sebastian’s group whom Alicia has been introduced to.  Now that she is married, Devlin convinces her to have Sebastian host a party in her honour.  The locked wine cellar becomes a point of especial focus and Alicia manages to purloin the key from Sebastian’s key ring.  There follows a great moment of tension as Alicia only just about manages to conceal this from Sebastian with a hug.  And the famous tracking shot which begins on a second-floor balcony and concludes with a tight close-up of that same key in Bergman’s hand hardly needs much commentary from me.  It’s a masterly sequence from the director who was breaking new artistic ground as he made this film.  He makes his own signature cameo appearance at this point – drinking a glass of champagne and setting it down quickly as his two stars approach.  It was indeed a providential thing that he got both Bergman and Grant for their respective roles as the two actors excel in terms of manner and performance.  And the tension around them mounts to wonderful effect as Devlin reminds Alicia that they only have a limited window in which to get into the wine cellar.  As glasses of champagne are consumed, she frets as to how soon Sebastian may discover the missing key. 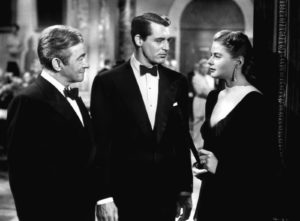 Hitchcock raises that bar ever so higher again as Devlin inadvertently discovers the presence of some type of metal ore in one of the bottles in the wine cellar.  But in order to mask his true intent, he is forced to kiss Alicia in front of Sebastian so that the latter will think he is pursuing her and not him.  Unknown to both Alicia and Devlin, Sebastian soon uncovers the truth of the masquerade.  He confides in his mother about this, pointing out that the group would most likely have him killed if they become aware that he is married to an American agent.  A moral dilemma once again raises its head for a character in Notorious.  On a purely personal level what is Sebastian to do with Alicia?  She is his wife, but the pretence behind this is now wholly apparent.  His mother and he concoct a plan whereby they will slowly poison her.  There’s a wonderful shot a while later in which Hitchcock has his camera foreground a poisoned cup of coffee as Alicia is examined by a doctor friend in the background.  She becomes aware of the plot against her when this character almost drinks from the same cup, but is warned off by Sebastian and his mother.  Devlin – who we learn has requested a transfer to Spain – becomes highly suspicious when Alicia does not turn up to their regular rendezvous.  Determining to go to Sebastian’s house, he soon learns that Alicia is ill and confined to her room.  ‘I was getting out because I love you,’ he tells her in an at-last revelation of his feelings.  ‘Say it again, it keeps me awake,’ she replies as he spirits her down the stairs and out of the mansion.  Sebastian, for his part, is now placed in an awkward position to put it mildly.  His associates require an explanation for this and he is unable to prevent Alicia’s departure as this will only serve to heighten their inklings.  The film concludes with Devlin driving Alicia off into the night and a door closing behind Sebastian as he faces his associates.  It’s clear that his position is now untenable; he is a dead man walking in effect. 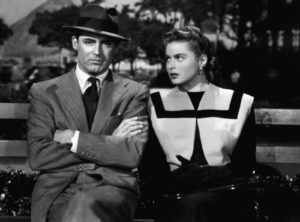 Notorious is positioned between 1945’s Spellbound and 1947’s The Paradine case with respect to Hitchcock’s filmography.  It’s one of the director’s very best films from the 1940s along with Rebecca, Shadow of a Doubt, Lifeboat and Foreign Correspondent.  In terms of production, Notorious began its life as a David O. Selznick production, but came to be distributed by RKO Radio Pictures by the time of its theatrical release in the latter half of 1946.  Of great significance as well is the fact that Hitchcock became its producer in the process.  This gave him greater artistic control and placed Selznick at something of a remove with regard to key decisions.  One of the most important of these concerned the casting of Grant.  Selznick had wanted Joseph Cotten in the role of Devlin as he was contracted to him.  The Gone with the Wind and Rebecca producer was also wary of Grant’s stature within the industry generally and the concomitant demands he feared might follow.  Hitchcock had similarly wished for a different piece of casting, but elsewhere.  Selznick did not agree with the director’s first choice of Clifton Webb for Sebastian, but instead pressed for Claude Rains.  Happily, both men got their way with respect to lead and supporting actor.  This is one of Grant’s very best performances in which the debonair tone is dialed down a few notches and replaced by a more discernible vulnerability.  Rains – who received an Academy Award nomination for Best Supporting Actor – is superb as Sebastian; a man who is painfully divided between his political principles and his personal needs.  There is a certain amount of sympathy we feel for Sebastian in spite of his being the villain, ultimately, of the piece.  The same certainly does not apply to Madame Anna Sebastian as played by the Austrian actress Leopoldine Konstantin in her sole American film.  It’s a terrifically cold performance right to the end as she implores Sebastian to assist Devlin with Alicia, but only so as to protect him from the rest of the group.  As Alicia, Ingrid Bergman is also very well cast; this is one of three films she made with Hitchcock and the three-time Oscar winner excels as a woman who makes enormous personal sacrifices for her country.  Based loosely on a short story called The Song of the Dragon, by John Taintor Foote, this is exactly one of the themes which Notorious explores as well as that of trust.  Devlin takes Alicia into his confidence and becomes romantically involved, perhaps, in order to further reinforce this.  Alicia, in turn, is asked to exploit Sebastian’s trust in her as he regards her the love of his life.  Each of these three characters suffer as a result because duty is seen – and held up notionally – as something that must, by simple necessity, supplant personal feeling.  The single-minded characters in Notorious are Sebastian’s mother, his associates and Devlin’s superiors.  They have no hesitation in requesting the difficult and, at times, near-impossible.  Again I return here to the overarching morality – or lack of, more appropriately – of the task which Alicia is requested to carry out.  ‘A man doesn’t tell a woman what to do.  She tells herself,’ Devlin states as he seeks to disentangle himself from this.  But the lingering fact-of-the-matter remains for us and for him.  Devlin is a patriot, as are his superiors; but the nature of the mission they ask of Alicia is unsavory and scarcely befitting of patriotism.  How can you sell a woman into such a state of near-bondage?  Is the security of a nation or the world worth such a price?  Such morality is nebulous to say the least.  Lastly, I should mention Notorious’s other famous shot which involves an early and romantic scene between Bergman and Grant.  Well aware that the Production Code would only allow a kiss of three seconds duration onscreen, Hitchcock broke the famous two-and-a-half-minute kiss into a series of such physical gestures; Bergman and Grant duly disengage every few seconds, nuzzle and whisper, before moving closer again.  It’s been described as the director’s ‘most intimate and erotic kiss’ and is one of several memorable moments from this truly wonderful film.