Andrei Tarkovsky’s 1972 science fiction film Solaris remains a seminal piece in the genre as a whole examining, as it does, themes relating to existence, love and the individual’s relatively negligible place in the universe.  Adapted from the 1961 novel of the same name by Polish author Stanislaw Lem, Solaris opens with some muted visuals on earth as Kris Kelvin (Donatas Banionis) wanders around outside his childhood home regarding the lake and the flora and fauna which inhabit this small corner of his world.  Kris is a psychologist with a rather stolid demeanour and his contemplative manner is remarked upon by his elderly father.  ‘He reminds me of a bookkeeper preparing his accounts,’ he says to Berton (Vladislav Dvorzhetsky), a former space pilot who, aware of Kris’s impending mission, has come to relay a message and a warning about the planet Solaris.  Berton plays an interview he gave many years before after experiencing apparent hallucinations whilst on a rescue mission from the station orbiting Solaris.  It’s an extended sequence so early in a feature film and the manner of the cross-questioning is Tarkovsky’s commentary on the rigidity of the bureaucratic powers-that-be as much as anything else.  The director was constantly at the mercy of the directives and mandate of the old Soviet Union and this is reflected to a certain degree in the scrutiny which the younger Berton is put under.  Leaving the house abruptly, when his communication draws some incredulous reactions, Berton nevertheless imparts an important revelation from the road concerning a four-metre-tall child he saw on the surface of Solaris.  It’s a portent of things to come which Kelvin or the viewer cannot possibly guess at.

The image of Kelvin’s deceased wife Hari (Natalya Bondarchuk) is presented in an early scene in which Kelvin burns some belongings outside his father’s house.  ‘I hold on to so much,’ he remarks as these material things go up in smoke.  The transience of all worldly possessions, and human life itself, is even further amplified as Kelvin reaches Solaris to discover that one of the three crew members on board, Gibarian (who was personally known to him), has committed suicide in an evident act of madness.  Kelvin makes tentative contact with the remaining two – the somewhat disoriented Dr. Snaut and the entirely aloof Dr. Sartorius.  Both men are quite defensive and insistent that the visiting psychologist should not enter their quarters.  There is evidence also of other persons being on board despite the fact that the crew numbered only three.  An abiding sense of mystery is further manifest in a video message which the departed Gibarian has left for Kelvin.  ‘Here, it could happen to anyone,’ he warns in a strained and tired voice. 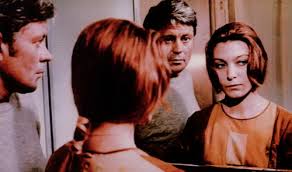 Kelvin retires for the night and when he awakens he is confronted by a figure who appears to be his dead wife.  There’s a wonderful moment here as Kelvin instinctively kisses her before they even speak.  A lesser film-maker might have opted for the obvious questions that would occur to a character in such a surreal situation – How can you be alive again?  How can you possibly be here?  Instead, Tarkovsky points to the depth of feeling and the emptiness which has beset his central character since his wife’s death.  Questions and expressions of amazement are not of importance.  The individual’s impulses are what influence his conduct here and later on in the film.  This first manifestation of Hari is aware of who she is and clearly recognises her husband.  But there are gaps in her memory, some of which Kelvin himself would rather not fill in.  ‘I have the feeling as if I’ve forgotten something,’ she says as she stares at a picture Kris has in his possession.  Devoted spouse as he is, Kris cannot however fathom or bear this anomaly and, as Part 2 of Solaris commences, sends a pleading Hari away in a capsule.  It’s an extremely traumatic moment which Tarkovsky further underscores by having Kelvin suffer burns caused by the departing vessel.  Visited by Snaut a short time later, the distressed psychologist reveals that Hari had died some ten years before.  Snaut refers to the sentient being as a ‘guest.’  ‘There may be an endless number of them,’ he warns and such indeed is the case as a second Hari materialises in Kelvin’s quarters that very same evening. 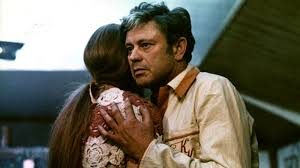 The new figure undresses and joins Kelvin in bed.  She is adamant that he not leave her side and fears being alone in something of a suggestion regarding the real Hari’s fate.  ‘When I saw you weren’t there, I got scared,’ she tells Kelvin having literally torn through the door of his room in a desperate effort to get out.  But like the first Hari, she only has a limited set of memories.  ‘I don’t know myself at all.  I don’t remember,’ she states as Kris shows her a home movie shot by his father.  Another telling physical resemblance between her and the real Hari is the needle mark on her arm.  It is established that Hari committed suicide by injecting herself with poison which Kelvin had negligently left in their house.  He was away at the time and Tarkovsky suggests that a remnant of this memory exists in her mind.  The second Hari dismisses Sartorius’s assertions that she is no more than ‘a reproduction…a matrix.’  ‘I am becoming a human being,’ she contends.  ‘I can feel as deeply as you.’  The explanation for these ‘guests’ is posited by the two scientists who speculate that they are materialisations of their concept of loved ones, or those who have passed on.  There is an entity on the planet surface, or it may well be the planet itself, which can discern thought patterns and convert these into incarnations of flesh and blood.  ‘Man needs man,’ Snaut reflects with regard to one of Solaris’s overarching themes, that of the individual and his continuing requirement for tangible connection.  Kelvin may accept the science of the situation, but this in no way lessens the emotions he is feeling which he thought were dormant, even long since passed.  The zero-gravity scene involving Kris and Hari, which is juxtaposed with shots of The Hunters in the Snow painting by Pieter Bruegel, is justifiably one of Solaris’s most famous moments, but it also reinforces this theme of human connectivity.  It matters very little to Kelvin that Hari the second is not the real character.  She walks and talks just like the original.  She needs him and he feels commensurately protective of her.

The core of Tarkovsky’s subject matter is perhaps best encapsulated in a line of dialogue uttered by Snaut to Kelvin.  ‘Don’t turn a scientific problem into a common love story,’ he advises after Hari the second has attempted suicide and then re-animated as if nothing had happened.  It’s impossible to write a piece about this 165-minute film which captures all the themes and responses elicited by Tarkovsky, but this is as good a summation as any.  Visually Solaris is a haunting piece with those beautiful lingering shots on earth replaced subsequently by the enigmatic surface of the planet Solaris itself.  The functional interiors of the space station are in direct contrast to this suggesting as they do the machinery and the institutional.  What is the individual’s role and function in a world of soulless compartments and featureless corridors?  An extended sequence early in the film as Berton drives through a major metropolis (shot in Akaska and Iikura in Tokyo) is a further extension of this idea of the modern-day world replete as it is with behemoth buildings and vast infrastructure.  The notion which Tarkovsky is asking us to confront is our own rather insignificant place in an endless universe of mechanism and edifice.  It’s little wonder that Kelvin accepts his new Hari so readily given the ten years of vacuum which have intervened since her passing.  ‘Whenever we show pity, we ravage ourselves,’ he tells Snaut in a feverish state.  But Kelvin has promised to remain on board the Solaris space station because this new Hari cannot possibly leave it with him.  Regaining consciousness following this sickness, he is, however, informed by Snaut that Hari the second has gone and that the other guests have also stopped coming as a result of an earlier intervention he, Kelvin and Sartorius had made.  Is this a happy or a sad conclusion we ask ourselves.  Has order in some way been restored?  Has Kelvin had a chance to say goodbye or was he once again absent as his wife vanished into a void?

The ending of Solaris and its final scene have, of course, been much discussed and rather than presenting a definite answer for all that has gone before, Tarkovsky is deliberately leaving it to the interpretation of the viewer I think.  The implication here (which occurs again on earth at Kelvin’s childhood home) is that a character who previously featured in the narrative may well be a guest as well I would suggest.  The piece of ground which Kris now walks upon appears to be part of the vast Solaris ocean.  Has Kelvin embarked upon a journey or is this a return we ask ourselves.  Anyone watching this film for the very first time will find themselves asking such questions as that parting image fades to black. 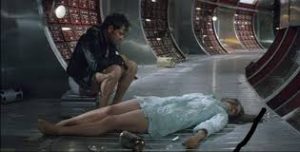 Winner of the Grand Prix Special du Jury at the 1972 Cannes Film Festival, and theatrically released in March of that same year, Solaris is typical of the style of its director who favoured the slow and meditative as opposed to the normal narrative tenets of energy and pace.  If you’re approaching this film for the first time, do not count upon a science fiction film in the mould of a Lucas or a Spielberg.  Tarkovsky did not even care very much for Stanley Kubrick’s 2001: A Space Odyssey by all accounts.  What concerns him are thought processes and the individual’s efforts to make sense of the world he inhabits.  To say that Solaris is solely an existential treatise is to miss the point as well.  Tarkovsky’s characters have theories and conjectures, but they are human ultimately and have concomitant desires and needs.  The 2002 remake (itself a much shorter film) directed by Steven Soderbergh and starring George Clooney was a fairly worthy entry as such films go and touched upon many of the same themes.  Like its excellent predecessor, it deserves a far wider audience.  A veritable milestone in the science fiction film genre as a whole.