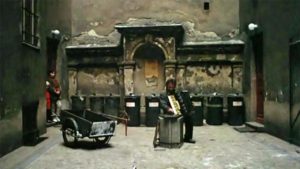 Werner Herzog’s 1977 film Stroszek opens as Bruno Stroszek (Bruno S., who also starred in the director’s earlier The Enigma of Kaspar Hauser) is being freed from the prison where he has served a period of time for a crime which is never exactly revealed.  It’s clear though that the Berlin street performer has a proclivity towards alcohol as the rather po-faced prison warden warns him against touching another drop of the hard stuff.  Not heeding such advice, Bruno heads straight for an establishment called BEER HEAVEN where he encounters Eva (Eva Mattes), a call girl who is being publicly demeaned by her pimp Burkhard.  ‘I’m starting a new life,’ Bruno informs her as he offers her a room in the flat which has been held in his absence by his landlord.  Eva takes Bruno up on his offer and, at first, his prospects seem fair as he re-enters society.  His slightly eccentric but kindly neighbour Mr. Scheitz (Clemens Scheitz) returns his beloved mynah bird and Eva appears to settle into domestic duties by polishing his furniture.  Meantime, Bruno himself returns to familiar courtyards playing his glockenspiel and dreams of an improved existence in the German capital. 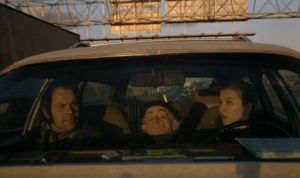 But all is not well as the tormenting Burkhard turns up in the flat several times with one of his associates, first pulling apart Bruno’s accordion, and then degrading him in his own living space.  Eva is also beaten up several times and Bruno realises his own inability to physically intervene on her behalf.  A glimmer of hope arises when Mr. Scheitz informs the two of his plans to permanently re-locate to the United States where his nephew lives.  Following yet another humiliation at the hands of Burkhard, the distraught Bruno seeks out a doctor who had – presumably – treated him some years before.  The practitioner reminds Bruno of how the latter had spent many years in homes and institutions and the detrimental effect this had on him in terms of standing up for himself to bullies like Burkhard.  Herzog (also on script duties here) inserts a touching scene in which the doctor takes Bruno to a premature baby ward to demonstrate to him how there are so many questions in this life without answers. 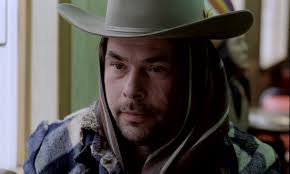 From an early point in Stroszek, America is held up to be a possible source of salvation for the unlikely trio, the land of opportunity.  ‘Everyone makes money there.  We’ll manage too,’ Eva opines in such a thread of thought just as she returns temporarily to prostitution in order to raise money for their fares.  Mr. Scheitz similarly offers promise in the form of a job which his nephew Clayton can give Bruno in his garage in Wisconsin.  Eva will be able to acquire a job working as a waitress in a motorway service area he predicts.  America is indeed the place where the friends may prosper.  The Old World no longer holds such potential or appeal.  But the new one which they eventually arrive in is not quite the embracing environment Bruno had expected.  At customs his mynah bird is taken from him and he sees no more of it again.  ‘What kind of a country would confiscate Bruno’s mynah bird?’ he asks in a slightly naive attitude.  The other two have no answer to this, but instead take him to view New York City from the lofty height of the Empire State Building.  Soon after, they are on the road to Wisconsin where they arrive in a place named Railroad Flats.  Mr. Scheitz’s nephew Clayton introduces them to his Native American assistant and the somewhat barren area itself in which he claims several murders have taken place.  In his free time Clayton ventures forth with a metal detector to see if he can solve a supposed disappearance.  Meantime, two neighbouring farmers of his bear guns as they plough near a disputed strip of land.  Mr. Scheitz for his part resumes his interest in the study of animal magnetism.  Bruno and Eva appear to be the only ones pining for a conventional lifestyle – he begins to wear a cowboy hat even at work; she tops up cups of coffee for passing truckers and regulars in the restaurant. 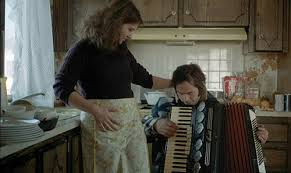 The notion that the emigrants have truly arrived in this great country is further reinforced by Herzog as an impressive trailer home is delivered to them.  Bruno and Eva eagerly move in.  Surely, domestic bliss now awaits we think; however, the writer-director also serves us definitive advance notice that the fantasy will be short-lived, the dream merely transient, as Bruno begins to worry about money and how he is not making enough of it.  In one particular scene he remarks as to how he believed things would be different in America.  A subsequent visit from a painfully polite bank official serves to accentuate such concerns.  Bruno and Eva are falling behind on their installments for the trailer home.  The price of the American Dream is one which must be stumped up in hard cash.  In an even more telling scene, Bruno comments upon the very different sort of trauma he is experiencing now as harsh capitalist reality sets in.  ‘You wouldn’t recognise me any more,’ he tells Eva.  She responds by pointing out that no one kicks him in their new country.  ‘No, not in that way,’ he replies.  ‘Not visibly, but they do it mentally.’ 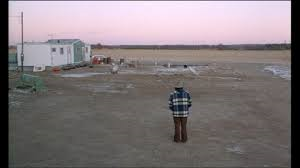 The relationship between the two has noticeably soured as well as they no longer share the same bed in the trailer home.  Eva attempts to justify such physical separation, but the truth of the matter is that she has fallen back into old habits and vices.  Growing tired of Bruno’s increased reliance on alcohol and his verbal ramblings, she simply takes off one night with two truckers bound for Vancouver.  Just like the mynah bird, we see and hear no more mention of Eva.  The bank repossesses the trailer home and auctions it off as well as Bruno’s TV set.  Again. Herzog reminds us here of how material belongings have come to be equated with the American Dream.  And so Bruno stands desolate staring off into the blank landscape which seems endless now that his home has been taken away.  In a film which most certainly can never be accused of predictability (as with its great director), Herzog then has him and Mr. Scheitz taking to the road as they determine to rob a bank in an apparent act of revenge.  The plot backfires in a semi-comic way as the bank is closed and they are reduced to holding up a nearby barber shop.  Mr. Scheitz is arrested soon afterwards, but Bruno evades the cold hand of the law.  Spending his last three dollars in a diner (where he chats to a perfect stranger), the disenchanted hero leaves his truck circling in a parking lot and enters a tourist trap where he puts coins into a number of bizarre arcade-type machines.  One contains a chicken dancing, another has a duck that plays the drum, the third one has a rabbit which rides a toy fire truck, and there is also yet another chicken that plays a miniature piano with its beak.  Bruno starts a ski-lift and sits in a chair which reads Is This Really Me?  An off-camera gunshot more than suggests that he has taken his own life.  Meantime, down below the spinning truck catches fire and burns in a near-hypnotic motion.  The chickens in the machines continue to dance and hammer against the tinny-sounding piano. 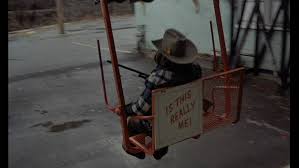 Stroszek is a highly unusual piece which entirely befits a filmmaker who simply never compromises his vision and certainly never resorts to the mundane or conventional.  Conceived during the production of Herzog’s 1979 film Woyzeck (which starred Klaus Kinski), Stroszek was written specifically for Bruno S. as compensation for deciding to use the professional actor in the later film as opposed to the former street performer.  In doing so – and in writing the film in a mere four days – Herzog incorporated several elements of Bruno S.’s actual life in the story.  Schleinstein was often beaten as a child – just as his character in the film – and also spent many of his younger years in a number of institutions.  He was a self-taught musician who was more than proficient on several instruments and his lack of acting ability was one of several considerations which informed Herzog’s decision to cast him in 1974’s The Enigma of Kaspar Hauser.  As per that earlier film, Bruno S.’s sincerity and unflinching sense of decency shine through in the main role, and he’s complemented well by Mattes and Scheitz in support.  On a personal level, I couldn’t help but notice some similarities between this film and that of Wim Wenders’ Paris, Texas which followed a few years later.  Both involve quite unique visions of America by prominent directors from the New German Cinema which evolved during the late 1960s and through the 1970s; both have various journeys which their central players undertake; and both posit on different levels the vacuity which exists at the centre of the so-called American Dream.  This, once again, is a country where the individual can become lost and is only too aware of the identity he sacrifices as he strives to conform to the tenets of something that is only notional, that can never be truly realised.  The words on the back of Bruno’s ski-lift chair take on an added air of pathos and tragedy when one considers how far away such an ideal place is from this well-meaning but rather unworldly figure.  Is This Really Me?