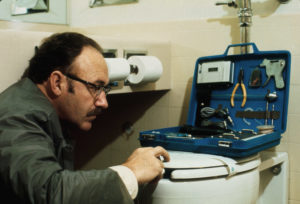 The year 1974 definitely marked a high point in the cinematic career of Francis Ford Coppola.  His multiple Oscar winner The Godfather Part II was released in December and, prior to this, in April to be precise, The Conversation was released and scooped the Grand Prix du Festival International du Film at the annual Cannes Film Festival.  Starring Gene Hackman as a surveillance expert named Harry Caul, the film is a cautionary tale about the inherent dangers of technology’s advancing role in society.  In our contemporary age of social media and ever-increasingly intricate means of communication, it retains a pertinent message to this very day.  But first and foremost, let’s consider the plot of the film as it unfolds. 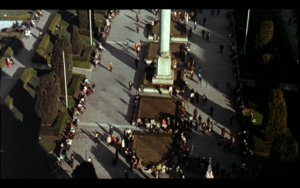 The Conversation begins with an expertly-crafted scene in San Francisco’s Union Square.  The 2.6-acre public plaza is initially presented in a wide shot from above.  Gradually, the camera drops down to street surface where a number of people are spending their free time – it appears to be early afternoon and many of them may be on their lunch break.  Of especial interest to the camera is a young couple who are deep in discussion (the titular conversation).  The man (played by Frederic Forrest) seems relatively calm and composed; the woman (Cindy Williams) looks slightly more anxious.  She bemoans the sight of a homeless person sleeping on a bench; there is a palpable tremor in her voice as they talk about a personal situation which, apparently, is common to them both.  The pair are also evidently concerned about the need to keep this particular conversation as discreet as possible.  They walk around the plaza in a deliberate manner, intent that no one should overhear the subject matter they are discussing.  The degree of caution being exercised by them is well founded; alas they are not alone in this respect.  The viewer steadily becomes aware of the fact that several innocuous-looking individuals are appearing a number of times in this very same scene.  One of them is Harry Caul – an average citizen by appearance who wears spectacles and has a mundane sense of dress.  Our suspicions about him are confirmed when he steps into a parked van which is laden with surveillance devices.  One of his colleagues – more his assistant really – Stan (John Cazale) remarks on the nature of the recording to date and the likely quality of the finished product.  Not for the last time in the film, he asks about the couple and the reason why they are being bugged.  Not for the last time, Caul replies that he doesn’t know and doesn’t care. 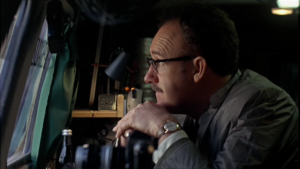 In direct contrast to this scene of personal privacy being violated, are the ones which follow whereby we learn more about the central character of Caul.  An intensely private man, the surveillance expert lives by himself in an apartment which is unadorned and uncluttered in terms of its decor and content.  The screenplay, by Coppola himself, quickly leaves us in little doubt as to Caul’s desire for solitude and his abhorrence of outside interest.  When he finds a birthday present left by his landlady, he immediately inquires as to how she knew about this and – more importantly – how she got access to the apartment.  Later that same evening, he visits his supposed girlfriend Amy (Teri Garr) who knows next to nothing about him, not even his profession.  Caul deflects lines of enquiry and dodges personal questions.  He does not wish to be analysed or have his life become the subject of speculation.  This point of view seems extraordinary to the viewer in light of what we know Caul does.  By means of audio, he documents conversations and sells them to clients who, in turn, use the information for some personal and/or public purpose.  There are consequences to this which Caul tries to deny, but we learn that a previous job of his caused the deaths of a number of people.  A subsequent church confession scene (which occurs in the film some time later) tells us much about Harry’s innate sense of Catholic guilt.  He also absolutely detests it when the Lord’s name is taken in vain. 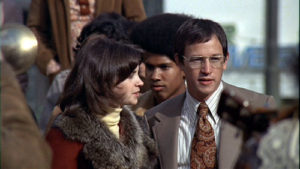 In one of his very best screen performances, Gene Hackman is superb as Caul.  It’s an appropriately understated performance which contrasts markedly with his far more vehement Oscar-winning turn in 1971’s The French Connection.  An excellent supporting cast includes the aforementioned Cazale, Forrest, Garr and Williams, as well as the likes of Robert Duvall (a Coppola regular for much of this decade) and Allen Garfield as William ‘Bernie’ Moran – a canny competitor of Harry’s who wishes to learn some of the latter’s successful (and secret) methods.  First-time viewers of this classic thriller will also note the role played by a young Harrison Ford as Martin Stett, the face of the corporation for whom Caul is working on this particular occasion.  The technical team behind the film’s production include the cinematographer Bill Butler (who replaced the original DOP Haskell Wexler) and Walter Murch, who served a key role as the supervising editor and sound designer (sound, of course, is an integral component of The Conversation’s premise).  Murch is said to have had a relatively free hand with respect to the editing of the film as Coppola was already working on the production of The Godfather Part II by this time.  Needless to say, the quality of the finished work was not diminished in any way. 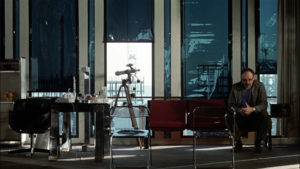 Coppola has referenced Michelangelo Antonioni’s 1966 film Blowup as an influence on his own work here and the parallels between it and The Conversation are quite discernible (David Hemmings plays a London fashion photographer named Thomas who believes he has captured a murder on film).  In a similar vein, Caul begins to fret as his recording of the conversation in Union Square takes on a more sinister meaning as it becomes more audible and distinct.  One phrase, as uttered by Frederic Forrest’s character, stands out in this regard – ‘He’d kill us if he had the chance.’  Abandoning his previous indifference apropos the significance of the discussion (‘I don’t care what they’re talking about.  All I want is a nice, fat recording’), Caul tries to unravel the essential meaning of these words and the context in which they are used.  At the appointed time, he refuses to hand in his work to the client’s aide (played by Harrison Ford) convinced at this stage that a potential murder is in the offing.  This refusal on his part to fulfill the contract he has undertaken represents a significant shift for Caul’s character – no longer a disinterested hired hand, he is now a man toying seriously with the notion of intervening – a thought which was anathema to him before.  But can he do enough and how far should he go in order to resolve the situation? 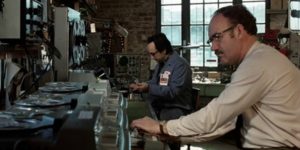 The 1970s was a wonderful decade for American film-making generally and thrillers such as this one as well as 1971’s Klute, 1974’s The Parallax View and Chinatown, 1975’s Three Days of the Condor and 1976’s All the President’s Men tapped into an emerging suspicion/opinion that institutions (both political and corporate) were no longer the forces of morality and honour that they claimed to be.  In a historical context, it’s interesting to note how the Watergate Scandal was an on-going saga at the time of the film’s release (Nixon resigned as U.S. President in August of that same year), although Coppola was quite adamant that this had absolutely no correlation to his story.  That having been said – and acknowledged – one would still imagine that Watergate must have spiked interest in The Conversation in some regard (the release of the Nixon White House tapes certainly had an uncanny resemblance).  In any event, history was unfolding in the United States the same year that films such as The Conversation, The Parallax View and Chinatown were released.  The national mood was low and the country would soon find itself questioning those very institutions which purported to be bastions of order and democracy.  In this latter regard, the timing of the release of The Conversation could hardly have been better, even if it were not intended thus. 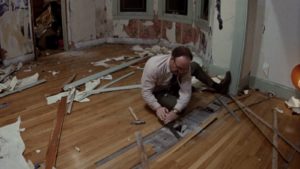 Having been tricked into giving up the tape of the conversation in question (following a surveillance convention of all things), the increasingly desperate Caul finally decides to take matters into his own hands.  From the recording, he has learnt that a pivotal meeting in a hotel room is to take place and – booking a room next to the one in question – he sets himself up to monitor the activities of the couple (he has also come to understand that the woman in Union Square is the wife of the client (played by Robert Duvall) and that she appears to be having an affair with Frederic Forrest’s character).  For not the first time in the story, Caul finds himself unable to intercede in a meaningful way when the apparent murder comes to pass – throwing himself onto the bed in the hotel room, he wraps himself in the sheets and appears to assume the foetal position.  But there is a twist in the tale of course as he learns a short time later and the true significance of that recurring phrase – ‘He’d kill us if he had the chance’ – takes on an altogether different meaning.  Returning to his apartment, bewildered and quite alone in the world, Harry receives a phone call from his client’s aide in which he is warned off from pursuing the matter any further.  The words ‘We’ll be listening to you’ in particular spark a frenzy in which he effectively strips the apartment from top to bottom in a fruitless search for any possible surveillance devices.  At the film’s end, the entirely isolated Caul can do nothing else but play his beloved saxophone.  It’s a conclusion that is stark in its imagery and hopeless with regard to the position and potential future of its central character. 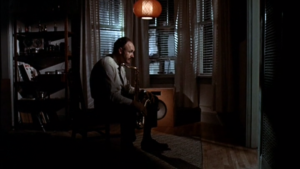 The Conversation remains a pertinent cautionary tale to this very day – as I previously suggested – and certainly has a thematic message for our contemporary society.  It examines the consequences of both action and inaction and questions how far the individual should go in order to right a precarious situation in which he partly has had a hand.  Harry Caul’s essential flaw is that he fails to intervene at key moments and allows a train of tragic events to unfold.  He also learns – much too late – the potentially fatal difference between interpretation and reality, between what is perceived and what is actual (‘He’d kill us if he had the chance’).  Four-and-a-half decades after its theatrical release, The Conversation remains one of Francis Ford Coppola’s very best works, featuring, as it does, a typically stellar performance from Gene Hackman.  1970s American cinema produced some truly wonderful and astute thrillers and this is one of the very best of them.  Essential viewing…and listening.