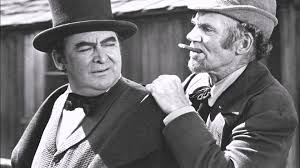 William Dieterle’s 1941 film The Devil and Daniel Webster is not easy to categorise in terms of what genre it actually belongs to.  On the one hand, it is part fantasy tale with respect to its central character happening upon good fortune and prosperity vis-a-vis the pot of gold which is given to him.  It is also a morality piece with regard to its themes of the dangers of wealth and the lure of material things.  There are undoubted echos here of the German Faust legend in relation to a down-on-his-luck New Hampshire farmer Jabez Stone (James Craig) who is almost at the end of his tether.  ‘When they were handing out hard luck, a farmer got theirs first,’ he complains as he looks all around him and sees a situation that is almost untenable.  Jabez lives with his wife Mary (Anne Shirley) and mother (Jane Darwell) on a farm in Cross Corner, New Hampshire.  The year is 1840, but there is a contemporary reference here to the plight of such men who have suffered and endured during the harsh years of the Great Depression.  A group of fellow farmers visit Jabez and encourage him to join what they refer to as the Grange, effectively a farmer’s association.  Jabez is reliably informed that the New Hampshire congressman and famous orator Daniel Webster (affectionately known as Black Daniel) is championing their cause and preparing a speech on farmer’s rights in the forthcoming Bankruptcy Bill.  In the scene which follows we are introduced to Webster (Edward Arnold) as he is seen penning that same speech.  A shadowy figure tempts him with regard to becoming president of the United States, but Webster manages to resist. 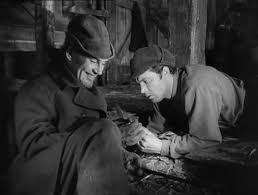 Jabez and his family meantime are only too aware of the pending threat of eviction from their farm.  Following a series of mishaps, Jabez finds he cannot take any more and speaks words which will have significant implications for himself – ‘That’s enough to make a man sell his soul to the devil.  And I would for two cents.’  A well-dressed man with a highly distinctive grin and an articulate manner about him appears and introduces himself as Scratch (Walter Huston).  ‘You have one of the richest farms in the country, you’re just going about it the wrong way,’ he tells Jabez before revealing a pot of Hessian gold beneath a board in the barn.  Resembling more a trickster persona or a confidence man in nature and appearance, the devil informs Jabez that he must sign a contract with his own blood in exchange for these riches.  Seven years is the period of time during which Jabez is promised untold wealth and prosperity.  Scratch burns the due date – when he will come to call – on the trunk of a tree – 7th of April, 1847.  What Dieterle is presenting to us here is, of course, the dark side of the American dream.  There is an immediate change in Jabez which will become clearer as the film proceeds and those seven years pass, but, in the meantime, his new-found wealth confers on him a greater degree of confidence and self-assurance.  When Webster comes to Cross Corner, Jabez makes a speech in his honour as the latter snoozes on his carriage (the insinuation is that Scratch has drugged the beer Webster has just drunk).  There’s a great exchange here between Arnold and Huston, one of several during the length of the film.  Attempting once again to entice Webster with promises of the presidency, Scratch is rebuffed, but it’s clear that he won’t give up easily.  ‘I’d rather see you on the side of the opposition,’ Webster tells him.  ‘Oh I’ll be there too,’ Scratch replies. 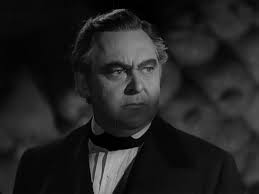 Jabez, for his part, is still a good man at heart and has not entirely dispensed with his moral code or his sense of social justice.  Mary is now pregnant and we see him chatting with his mother on matters relating to the acquisition of money and how this may be gone about in a correct way and also in an evil way.  Attempting to cut down the aforementioned tree, Jabez is reminded by the as-always beaming Scratch that this would represent a ‘breach of contract.’  But Jabez’s progression towards a more twisted and covetous version of himself has already begun as posited in the scene in which he helps out a neighbouring farmer by giving him seed.  ‘I’m not a man to get rich on other people’s hard luck,’ he declares, but forces from within and without will ensure he becomes just that.  A freak hailstorm spares his crops, but wipes out those of his friends and fellow farmers.  Scratch plays his part by approaching these people and offering them money to work for Jabez.  In this regard, Jabez is quickly moving towards becoming like Miser Stevens (John Qualen) the local moneylender.  And he will be just as hard a taskmaster with his neighbours.  Dieterle here is suggesting to us the very corruption of the community which is supposed to be predicated on values of trust and support.  A harvest dance which follows is a manifestation of such community spirit, but Scratch’s malevolent presence is in the background, as ever, as he sends a sexually-appealing young woman named Belle (Simone Simon) to further realise the conversion of Jabez.  The change which has taken hold of him is even more evident as he complains about his baby son’s crying during the night and his refusal to attend service on Sunday with his mother and Mary.  Quite rightly, he is warned that people are talking about him in the village and that resentment is growing.  But he is quite blind to this and, years later, has built for himself a mansion which Mary and his mother choose not to live in.  The scheming Belle has also worked her magic on Jabez’s son, Daniel (named after Webster, who is his godfather), a rather spoilt child who is too used to getting his own way.  A rift has opened up between Mary and Jabez and she seeks Webster out for advice.  ‘It’s like a shadow growing,’ she tells him with regard to Jabez’s new persona and the incessant greed which drives him.  There is also the suggestion that Jabez has abandoned religious fervour and monogamy – ‘I’ve seen him mock at the church bells, the bells that rang out at our wedding.’ 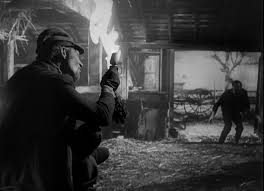 Jabez decides to throw a lavish party in his new mansion and have Webster as the surprise guest-of-honour.  But the latter figure is none too impressed as he learns from Jabez’s neighbours of the impossible contracts and terms the increasingly avaricious Jabez has forced them to agree to.  He is described as being worse than any loan shark; worse even than the despised Miser Stevens, who we soon come to realise had also made an unholy pact with Scratch.  ‘You’re as blind as a Burma Bat, you and your pot of gold,’ Webster tells Jabez as he confronts him.  In an act of desperation, Jabez – aware that the 7th of April, 1847 is now looming – attempts again to cut down the tree.  Scratch offers him an extension of his contract, but only on the proviso that Jabez gives him his son.  Webster agrees to assist Jabez in his time of need and demands a jury trial in the hope of saving him from the clutches of Scratch.  He uses the tack of asserting that Scratch is not of America and so cannot claim one of its citizens for himself.  But Scratch has his answer at the ready – ‘Who has a better claim?  When the first wrong was done to the first Indian I was there.  When the first slaver put out for the Congo I was on her deck.  Am I not spoken of still in every church in New England?  Tis true the North claims me for a Southerner and the South for a Northerner, but I am neither.  I am merely an honest American like yourself – and of the best descent – for, to tell the truth Mr. Webster, my name is older in this country than yours.’  The subsequent trial takes place in the same barn in which Jabez had sold his soul seven years before and Dieterle employs expressionistic or noirish lighting as he has done at several junctures in order to heighten the effect and give it an almost other-worldly feel.  Somewhat pompously (which is one of his weaknesses as well as a predilection for alcohol), Webster is sure that no American jury will side with the devil.  But Scratch once again gets the upper hand on him with regard to the jury he selects, a rogue’s collection of murderers and treacherous characters which include Captain Kidd and Benedict Arnold.  Presiding over the trial is one Judge Hathorne, the bloodiest of all the Salem witchcraft judges.  Webster is not deterred, however, and goes on to win the day by appealing to their patriotic pasts.  ‘You were Americans all,’ he tells them, ‘don’t let this country go to the devil.’  The comparisons with Jabez’s predicament strike a suitable chord – ‘You were trapped in your desire to rebel against your faith…you took the wrong turn.’  The tactic works and the jury finds for Jabez (the foreman significantly tearing up the seven-year contract).  Webster expels Scratch from the barn, but not before the latter promises him he will never be president.  The balance of Jabez’s world is restored as he sits down to a meal with his family, Webster and his friends.  But the film has to end with the devil, of course, and there’s a wonderful moment as the Oscar-nominated Huston breaks the fourth wall as he contemplates his next victim and points out at the audience.  This is in keeping with the title card which opened the film – ‘But it could happen anytime, anywhere, and to anybody – Yes, it could even happen to you.’ 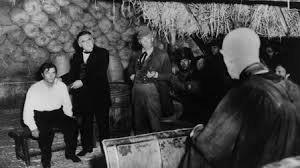 Bernard Herrmann won an Academy Award for Best Music for his robust score and it’s notable that he also worked on another very famous film released in 1941, namely Orson Welles’ Citizen Kane.  Both Kane and The Devil and Daniel Webster were not entirely appreciated in their day; The Devil and Daniel Webster had its title changed to All That Money Can Buy (in order to avoid confusion with The Devil and Miss Jones which was released that very same year), but was not a box office success and was subject to a quality-sapping cut (reduced at that time to 85 minutes).  Fortunately, the excised scenes were not lost and the film was restored to its original 107-minute length in the 1990s.  Based on the short story of the same name by Stephen Vincent Benet, it’s a glorious piece which – as I previously mentioned – fuses several different genres and styles: fantasy, morality tale, even shades of the horror genre.  An actor as well as a director, the German-born Dieterle had appeared in F.W. Murnau’s 1926 silent film Faust, so there can be little doubting the knowledge he had of this particular story.  The Devil and Daniel Webster is a highly atmospheric work with regard to the influences of German expressionism, which become near-nightmarish at several key points, including the party scene and the demonic-like jury in the barn.  It’s a film that was forgotten, but, thankfully, has re-emerged and I would recommend it to anyone with respect to its performances (Arnold and Huston in particular), the direction by Dieterle, Herrmann’s wonderful score and the stylish cinematography of Joseph August.  An uncommon gem.