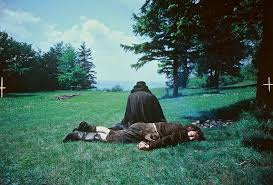 Werner Herzog’s 1974 film The Enigma of Kaspar Hauser is based on the true story of the foundling Kaspar Hauser who appeared out of nowhere one morning in the town square of Nuremberg in the year 1828.  Played by Bruno Schleinstein (aka Bruno S.), Kaspar is freed from his one room cell by a mysterious figure who may well be his father.  He is shown how to walk by the same individual and taught some basic phrases of language, the most prominent one being, ‘I want to be a gallant rider like my father was before me.’  Bearing a letter addressed to the Cavalry Captain of the Fourth Squadron, Sixth Schwelische Regiment, Kaspar is deposited in the Bavarian city.  Quite quickly, he becomes the subject of examination by the locals and police bearing as he does only the clothes on his back, a prayer book entitled Spiritual Forget-Me-Nots and a printed treatise called Six Deep and Devotional Prayers.  He also possesses a folded piece of paper containing a gold leaf or gold dust and a small rosary with a metal cross. 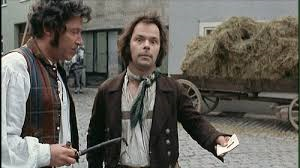 Kaspar is interned in a tower for criminals and vagabonds, in spite of his placid nature, but some early glimmers of hope are offered by Herzog with respect to a local family who show him how to eat and bathe.  ‘I am so far away from everything,’ he tells the woman of the house as he gently holds her young baby in his arms.  In the town itself, there is much gossip and rumour as to his origins.  One story has him as a runaway from a group of English circus equestrians; another postulates that he was a member of the Baden Dynasty who was to be eliminated as most likely heir.  Words and language are already held up by Herzog as a framing device with respect to the way in which the local population attempt to create a narrative surrounding this mysterious man.  But there are disparaging voices as well in the form of those who note how Kaspar is becoming a burden on the community coffers.  A figure of much interest and speculation, the young man is featured in a show which includes a bear, an Indian fire-eater and the Four Riddles of the Spheres (the Little King, the young Mozart, an untamed Indian named Hombrecito and Kaspar the foundling).  After an escape from this mini circus, Kaspar is taken in by a kindly gentleman, Professor Georg Friedrich Daumer (Walter Landengast).  Two years pass in relative calm, but he is continually frustrated at how things are so hard for him.  ‘Why can’t I play the piano like I can breathe?’ he asks and he also worries at his interactions with the community at large.  ‘The people are like wolves to me,’ he tells his surrogate father.  He also struggles to comprehend his surroundings and its structures.  In one scene with Daumer he regards the tower in which he was previously held and remarks as to how he would like to meet the man who built it as he surely must be a very tall man.  Daumer corrects him on this point, explaining the use of scaffolding in the construction of such buildings, but Herzog posits the thought in our minds that Kaspar will never advance in this world despite the interventions of figures such as the professor. 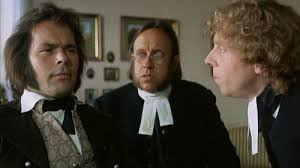 The scene with the pastors is further evidence of how society and its institutions wish to frame the individual and make him conform to their expectations.  Telling the two men in garb that he cannot believe that God made everything out of nothing, Kaspar draws their sighs of parochialism and orthodoxy.  ‘If he doesn’t understand God, then he’ll simply have to have faith,’ one mutters to the other.  Remaining at an intellectual and linguistic remove from society at large, Kaspar continues to question the most fundamental of things.  ‘What are women good for?’ he inquires of the amused woman-servant to Daumer.  It is noted by her and others how Kaspar is only capable of telling the beginning of stories and not their endings.  His own destiny is as much an uncertainty as that of his beginning.  ‘It seems to me my coming into this world was a terribly hard fall,’ he informs Daumer in a near-lament.  A particularly memorable scene – which most people who’ve seen this film will remember – is that of the one in which he is posed a question of logic by a rather pompous professor.  Presented with a scenario in which he must identify whether a person is from a village of liars or truthful people, Kapsar elicits an expression of slight irritation from the learned one when he declares that he would ask the person if he is a tree frog. 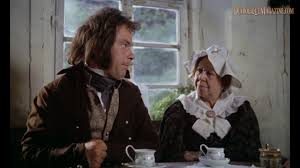 Kaspar starts writing his biography and a further source of hope is offered by way of the somewhat foppish Lord Stanhope who arrives in Nuremberg and expresses an interest in taking him under his wing.  Kaspar is introduced into society, but this debut does not go very well when he articulates a desire to return to his former cell and plays Mozart very ineptly on the piano.  The tale takes a rather unexpected turn following on from this as Kaspar is attacked and severely beaten by an individual who appears to be the same person who delivered him from his state of captivity to Nuremberg.  With more than just a portent of impending doom, Kaspar describes a dream he has had (‘It dreamed to me’) in which a procession of people are climbing a mountain and at the summit is the figure of death.  Kaspar is subsequently stabbed by the same person and on this occasion is beyond saving owing to the nature of his injuries.  Lying on his deathbed, he tells the beginning of a story concerning a caravan in the desert which is led by a blind man.  There is no ending to this story either, but Kaspar’s own narrative comes to a close with his death.  His body is subsequently examined and an abnormality of the cerebrum is discovered as well as a deformity of his liver.  The record-taker, who appears at various intervals throughout the film, is practically in a state of delirium as he believes these findings offer ‘an explanation for this strange man.’ 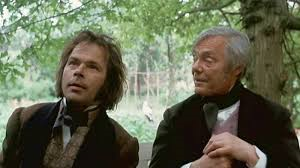 Herzog’s film -one of his early features – is something of a timeless piece and it more than stands up to repeated viewing.  The director has always been fascinated with such marginal figures as Kaspar as much as the over-reachers who populate films of his such as Aguirre, the Wrath of God and Fitzcarraldo, but an even more central theme he touches upon in this is the individual’s interactions with the world and his acquisition of societal tools such as language.  Consider, for example, the director’s 1971 documentary feature Land of Silence and Darkness in this regard, particularly the figure of the deaf and blind boy Vladimir Kokol who appears later in that same film.  There are comparisons between him and Kaspar with respect to the way the benevolent figures of the professor and the young family attempt, in their own quite distinct ways, to stimulate his mind.  Herzog’s 1976 documentary feature How Much Wood Would a Woodchuck Chuck also concerned itself with language of a very different kind and used in a more contemporary setting.  A further running theme explored in The Enigma of Kaspar Hauser is the near-absurdity of certain things which the central character encounters and questions.  This may well be a reason why the film is shot in a somewhat dreamlike style, particularly with regard to the dreams which Kaspar himself describes.  Once again, just consider that previously mentioned line of dialogue – ‘It dreamed to me.’  The world which Kaspar is suddenly thrust into might as well be a dream as far as he is concerned.  That he increasingly expresses a desire to return to his darkened cell more than suggests that he is at odds with the external world and it with him.  The reductive language and conjecturing which follow him right to the film’s final scene is as much a violence as that of the assailant who eventually kills him.  The only pure thing in The Enigma of Kaspar Hauser is Kaspar Hauser himself.  Even the children who play with him and teach him words are seen to be somewhat mocking or over-demanding in nature (consider in this regard the scene in which the young girl tries to teach him a difficult song).  Much has been made of the parallels between the actor Bruno S. and the character he portrays in Herzog’s film.  An entirely untrained player, Schleinstein had been beaten as a child and spent many of his formative years in institutions.  He was a self-taught musician whom Herzog first spotted in the 1970 documentary Bruno der Schwarze and the director subsequently determined to cast him in this film in spite of his lack of formal training and experience.  It was a bold and imaginative move which paid dividends as Schleinstein is particularly memorable in the role, informing it at all times with a child-like gaze and an aura of innocence.  Winner of the Grand Prix at the 1975 Cannes Film Festival, this is one of Herzog’s very finest films and as good a starting point as any for those interested in approaching his large canon of work.  Moving and also fiercely unsentimental in equal measure, this is one of the very best German films of the latter half of the 20th Century.