Movie Retrospective: The King of Comedy 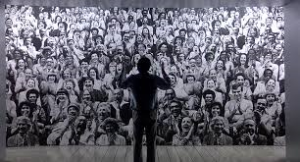 Martin Scorsese’s 1983 black comedy examines themes of celebrity worship and the power of media culture and for these reasons remains as fresh and pertinent today as it did back then.  Scorsese regular Robert De Niro plays Rupert Pupkin (regularly misspelled or mispronounced as he puts it) a somewhat pathetic character who has notions of fame and grandeur.  An aspiring stand-up comedian, Rupert practices his routine in his mother’s house and even has cut-out figures to help sharpen his act.  He is also an avid autograph collector and one significant evening comes face to face with one of his idols, talk show host Jerry Langford (Jerry Lewis).  Rupert helps rescue Langford from some overly zealous fans, including Masha (Sandra Bernhard), and the rather crusty celebrity tentatively agrees to listen to Rupert’s work sometime.  Pupkin has daydreams in which he has become a star of Langford’s standing and reputation and also fantasises about wooing an old high school friend Rita (Diahnne Abbott).  His flights of fancy know no bounds and extend even to a dream of marrying Rita live on the Jerry Langford Show.  Meantime, buoyed by his meeting with Langford, Rupert begins to hang out at his office on the premise that they are now friends and that Jerry will provide him with his first big break.  But Langford’s staff are not best impressed with this and Rupert is eventually escorted from the building by security. 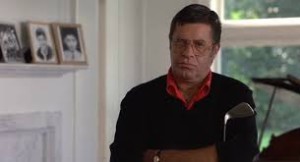 Still convinced that he is destined for greater things, and equally determined to seek Langford out, Rupert turns up at the latter’s country home one weekend with an oblivious Rita accompanying him.  Rupert makes out as if he is Jerry’s guest, but the talk show host finally snaps and launches a tirade of abuse against him.  This is one of the best scenes in the film and De Niro and Lewis are marvellous here.  Following this sizeable defeat – as it appears to be – Rupert decides on a more dramatic course of action.  He and Masha kidnap Jerry and demand that, in exchange for the safe return of Langford, he must be given a slot on that evening’s show.  The producers and FBI finally agree to this and Rupert gets his precious fifteen minutes of fame (though in fairness I must amplify that statement by saying that his routine on the show lasts only about half that time).  Masha – who, incidentally, is besotted by Jerry – holds the unfortunate star in her apartment, but he tricks her into getting away and flees into the night.  On the way back to the office or his home, Jerry sees Rupert appearing on his show in the window of a TV shop.  Adamant that he must have proof that the recorded show has gone out on air, Rupert insists that the FBI take him to the bar where Rita works.  Pupkin has his much sought-after moment of glory as he stands beside the TV set and watches the act.  The audience seems to respond well to him as he mixes stories from his childhood with some well-timed jokes.  At the end of the set he informs them that he has kidnapped Jerry in order to get on his show.  ‘Tomorrow you’ll know I wasn’t kidding and you’ll all think I’m crazy,’ he points out quite correctly, ‘but I figure it this way – better to be king for a night, than a schmuck for a lifetime.’ 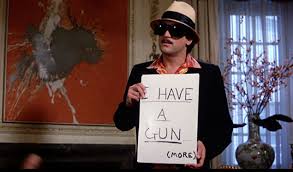 Made some three years after Raging Bull and two years prior to 1985’s After Hours, The King of Comedy did not represent a commercial hit for Martin Scorsese, nor was it widely acclaimed on its first release.  The passage of time however has been kind to it and today it is quite rightly hailed as one of the director’s best.  Robert De Niro was highly instrumental in getting the film made and he was the one who purchased the film rights to the script by Paul D. Zimmerman.  I mentioned the predominating themes of The King of Comedy previously and the film also draws comparisons with that of a previous Scorsese/De Niro collaboration, 1976’s Taxi Driver.  Rupert is similar in many ways to Travis Bickle with respect to his perception of reality and the lengths he will go to in order to test the boundaries of his fantasy world and the good will of those around him.  Consider for example that scene in which Travis takes Betsy on a very awkward date.  Or his conversation in the cab with presidential hopeful Charles Palantine.  The parallels between the two are most noticeable in both endings.  Travis is hailed as a hero following the bloody shootout in which he liberates Jodie Foster’s Iris.  Rupert too, it appears, has become something of an accidental hero by film’s end.  He has served two years and nine months of a six-year prison sentence, but his exploits have gained him a most curious and financially-promising notoriety.  His biography is a bestseller and there are suggestions of a movie deal.  Lucrative offers of TV time and his own show are in no short supply.  But just like Travis’s flashing glance at the end of Taxi Driver, a question raises its ugly head – are we watching reality here or just another manifestation of Rupert’s grand delusion?  The interpretation is left with the viewer.  Has Rupert become a king or is he still merely a schmuck? 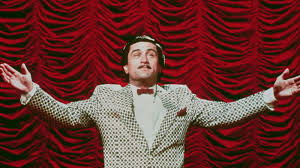 There is much to admire in this sharp satire and some wonderful performances, particularly by De Niro and Jerry Lewis.  True to form, the Oscar-winning actor was methodical in his approach to the part becoming the character as best he could in his preparation.  He stalked real-life autograph hunters and also sought out individuals who were obsessed with him.  As for Lewis, his performance is entirely fitting and his expressions constantly speak of a man who is barely containing his rage.  Watch out in particular for that aforementioned scene in which Rupert and Rita turn up uninvited to Langford’s country home.  In order to draw an enraged response from his co-star, De Niro apparently hurled a plethora of anti-Semitic remarks at Lewis.  The ruse definitely worked.  Lewis is magnificently irate in the scene.  In the supporting cast watch out for Ed Herlihy and Tony Randall playing themselves.  Sandra Bernhard is also a stand-out as the compulsive Masha.  Scorsese himself cameos as a director on the Jerry Langford Show.  His mother Catherine Scorsese provides the voice of Rupert’s unseen mother.  The King of Comedy was not universally well received in its day as I said before, but it has been correctly reappraised over the years and now stands high in the Scorsese/De Niro canon.  Essential viewing in that regard if you are a fan of both men, especially when working together.