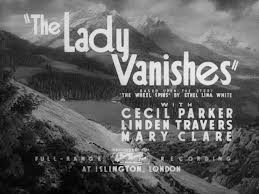 What was it about Alfred Hitchcock and train journeys?  The director’s films feature many forms of transport, but the good old-fashioned locomotive surely leaves the greatest impression.  Consider, if you will, Cary Grant and Eva Maria Saint aboard the 20th Century Limited in 1959’s North by Northwest.  Earlier that same decade – 1951 to be precise – Farley Granger and Robert Walker have a seemingly innocent chat about swapping murders as the powerful wheels spin beneath them.  In 1943’s Shadow of a Doubt (the director’s personal favourite of his own), merry widow killer Uncle Charlie (Joseph Cotten) eventually comes to grief whilst trying to push his own niece onto the tracks.  And then of course there is 1935’s The 39 Steps in which murder suspect Richard Hannay (Robert Donat) journeys to Scotland on the appropriately-named Flying Scotsman in the hope of clearing his name.  The iconic Forth Bridge makes an appearance here as well.  The 1938 film The Lady Vanishes opens in a remote European corner where several passengers have been discommoded by a pesky avalanche along the rail line.  Needless to say, this physical impediment is soon resolved, but not before some unusual scene-setting events take place, including the strangulation of a folk singer at the hotel where they are staying the night. 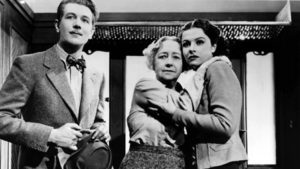 Based on the 1936 novel The Wheel Spins by Ethel Lina White, this is a terrific thriller from the master (one of his last British films before departing for America) with some familiar visual tricks and great flourishes of humour.  Margaret Lockwood plays the heroine of the piece, Iris Henderson, who following a mysterious bump on her head at the station – a so-called accident evidently intended for someone else – encounters the older and very affable Miss Froy (May Whitty), a former governess and music teacher.  Still poorly from the after-effects of the blow to her skull, Iris has tea with the old dear and then retires to her compartment.  When she awakens, Miss Froy has literally vanished into thin air and even more disconcerting is the fact that none of her fellow passengers seem to recall the old lady at all.  Iris does manage to secure the help of a male ally in the form of Gilbert Redman (Michael Redgrave), with whom she’s already had a confrontation at the hotel regarding his loud music.  Redman and Iris search the train from top to bottom, but only meet with questioning looks and the medical explanations of Dr. Hartz (Paul Lukas), a brain surgeon who has much to suggest about Iris’s apparent hallucination. 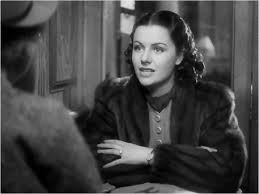 There’s no doubt in the viewer’s mind that Iris did indeed see and speak to Miss Froy, but why all the subterfuge from the other travellers we ask ourselves.  Each one of them has their own motivations in this regard extending from the trivial (the cricket-obsessed Caldicott and Charters), the personal (Todhunter and his mistress seeking to avoid tawdry scandal) through to the more politically-charged Dr. Hartz himself who, unsurprisingly, is not all he seems.  Exterior surface and internal incentive is a running theme in the film which Hitchcock explores by way of the subplot involving Miss Froy herself.  She is not quite the innocent abroad either, but rather has an important message to convey to the Foreign Office in Whitehall.  Let’s remind ourselves again that The Lady Vanishes was made in 1938 at a time when Europe as a whole was facing up to the fast-approaching conflagration that would be World War II.  Discovering that Miss Froy is still on board, Iris and Redman help free her aided by Hartz’s fellow conspirator (a false nun who wears high heels), but this has implications later on in the form of a shootout and a mad dash towards the border.  Along the way the director employs some of his customary visual tricks which include faces of fellow passengers all appearing as if they are the missing Miss Froy to Iris’s eyes.  There’s also the important moment when the sound of the train whistle forces Miss Froy to spell her unusual surname on the window in the restaurant car.  Iris uses this as her first piece of meaty evidence to convince Redman that the old dear is not merely a figment of her imagination. 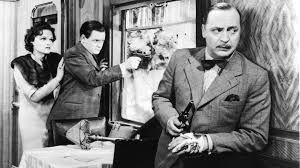 Shot in Gainsborough Studios in Islington and Shepherd’s Bush and on location in Hampshire, The Lady Vanishes represented a huge commercial and critical success for Hitchcock and merited the director the New York Film Critics’ Circle Award for Best Director.  It’s interesting to note that the 1936 novel was originally intended to be directed by Irishman Roy William Neill (who made his name directing several of the popular Sherlock Holmes films starring Basil Rathbone and Nigel Bruce), but location work in Yugoslavia was abandoned when the authorities there became wise and less than pleased with the proposed script and expelled the film crew from the country.  Producer Edward Black subsequently enticed Hitchcock to helm the film, and although the plot differs quite substantially from the source material, the director did not impose too many changes on the original shooting script. 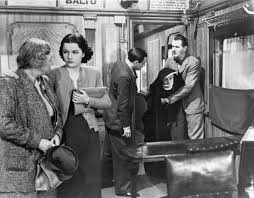 The resulting film moves along at a wonderful pace throughout its 97-minute duration and features some fine ensemble acting, particularly that of the aforementioned Lockwood and Redgrave (who barb to great effect early on, but, of course, become more romantically involved as the plot thickens).  Naunton Wayne and Basil Radford are also particularly memorable as the cricket fans Caldicott and Charters, whose only real concerns are to get home in time for the much talked-about Test Match.  Dame May Whitty features in a nice turn as the titular Lady of the piece and other notables in the cast include Cecil Parker.  The director features also in his customary cameo – appearing towards the end of the film at Victoria Station – and his direction on the whole amplifies the moments of intrigue, whilst also coaxing a nice undercurrent of humour which runs beneath the surface.  It’s no more than a piece of cinema trivia here to point out that Michael Redgrave’s own daughter Vanessa would herself appear in a famous screen version of Agatha Christie’s Murder on the Orient Express in 1974 (yet another delayed train journey involved in the Sidney Lumet-directed film).  Of less import perhaps is the 1979 remake of The Lady Vanishes which featured Elliott Gould, Cybill Shepherd and Angela Lansbury.  A BBC television adaptation also came our way in 2013.  But this is the original and best screen version of the story which is more than worth devoting half an afternoon to for any confirmed Hitchcock fan.  A common thread in the master’s films is the innocent bystander who gets thrust into the very core of larger and very exceptional circumstances which temporarily threaten to overwhelm him or her.  Such is one of the themes of 1938’s The Lady Vanishes, a highly recommended film in this genre and the director’s canon generally.