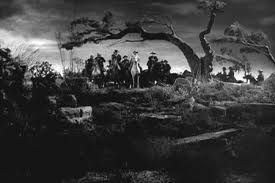 William A. Wellman’s excellent wartime western is a stark indictment of lynching, mob rule, and the rush to judge individuals prior to them having a just hearing and say in their fate.  Based upon the 1940 novel of the same name by Walter Van Tilburg Clark, the setting is a place called Bridger’s Wells, Nevada in 1885.  Two relative strangers to the town Gil Carter (Henry Fonda) and Art Croft (Harry Morgan of later MASH fame) arrive in the apparently sleepy location and seek out the local watering hole for a few drinks.  Gil is looking to link up with his on-off girlfriend.  Very soon he is to be disappointed.  There is a certain malaise hanging in the air.  A spate of cattle-rustling has been plaguing the area and news comes of the latest such incident which has, reportedly, claimed the life of a rancher by the name of Larry Kinkaid.  Before long events take a particular momentum and a posse is hastily formed.  Some of the local officials argue against this, pointing out that the posse in question is not lawful as the sheriff is absent.  Spearheaded largely by the self-important Major Tetley, however (who has his own personal agenda involving his soft-spoken son), the posse leaves town and heads towards the location where the presumed rustlers have been sighted. 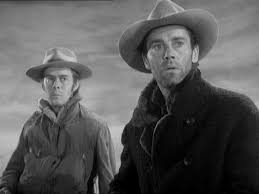 An excellent cast with the aforementioned Fonda and Morgan includes the much underrated Dana Andrews, Francis Ford (elder brother of famous director John) and a young Anthony Quinn as the three men suspected of rustling and Kinkaid’s murder.  They are joined by other recognisable actors of the day such as Harry Davenport (Gone with the Wind), Marc Lawrence (Key Largo amongst many others) and Jane Darwell who’d previously played Fonda’s mother in Ford’s 1940 adaptation of Steinbeck’s The Grapes of Wrath.  Henry Fonda regarded this as one of his own personal favourite films and it came at a time in his career when he was said to have been unhappy bound as he was to his studio contract with 20th Century Fox who produced this film as well as The Grapes of Wrath three years earlier.

The Ox-Bow Incident has a running time of a mere 75 minutes so there is not much in the way of extra character exposition or story sidebars beyond the information we the viewer need to inform our interpretation.  The hell-bent posse formed, the action quickly moves on to Ox-Bow Canyon where most of the remainder of the drama takes place.  The supposed rustlers are woken in the dead of the night and many hard accusations are thrown at them.  They deny all of course, but the evidence of some of Kinkaid’s livestock in their possession, without a proof of purchase bill of sale, and his gun do not augur well for them.  The posse decide to hang the three men at sunrise, in the absence of a trial or what we would define latterly as due process. 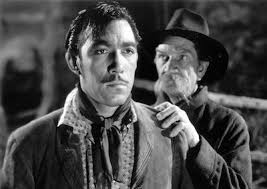 Andrews’s character in particular begs for mercy and is allowed to pen a letter to his wife and children.  The contents of his letter is read by Davenport, one of the men vehemently opposed to the lynching, and he betrays the latter’s trust by holding up the letter in a vain attempt to prove beyond doubt that Andrews and his two colleagues are innocent.  In this very moment The Ox-Bow Incident suggests that even good men such as Davenport can be capable of machinations despite their own best of intentions.  The same is true of Fonda and Morgan’s characters who, although too believing the men to be innocent, have joined the posse partially out of their fear that they might be accused themselves otherwise.  The character of Major Tetley’s son Gerald should also be mentioned in this regard.  Tetley, a pompous oaf who still dresses in uniform, has brought his son along to make a man of him.  When he doesn’t fall in line at a significant moment towards the end of the film, the major strikes him and berates him for not living up to his so-called ideals.  These are stripped away very soon afterwards, however, as it transpires that Kinkaid is not actually dead and that the lynching, which has taken place meantime, is exactly the sadistic and wholly nefarious piece of vigilante justice the film has been overtly telling us all along. 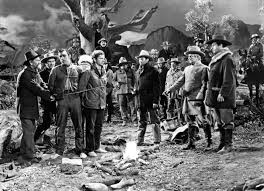 Nominated for the Oscar for Best Picture at the 16th Academy Awards (it lost to Casablanca), The Ox-Bow Incident is quite rightly hailed today as a classic of its particular genre.  To call it a Western (as indeed I’ve done above) is probably too simple a classification.  The story could belong to any genre if truth be told and could similarly be related to any particular era in history.  The location and milieu of the film – the old west in the latter half of the 19th century – serves as a very effective setting and director Wellman makes good use of some of the genre’s stock motifs.  A film which Clint Eastwood has also voiced his admiration for, The Ox-Bow Incident was recently released in Blu-ray format as part of the Arrow Academy series.  The film has been lovingly restored and the 73-year old print looks marvellous.  It was only my own second time watching this great film; previously I’d seen it on TV.  I look forward to watching it again in the future.  From me it comes highly recommended.