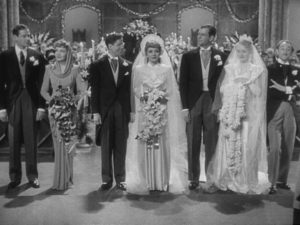 Preston Sturges’ riotous 1942 screwball comedy begins with a frenetic opening credit sequence that is a story all in itself.  Accompanied by a fast-paced version of the William Tell Overture, the writer-director presents us with a number of lively sequences in which Claudette Colbert is bound and gagged in a closet while Joel McCrea, dressed in a groom’s suit, rushes to the church.  A title card reading ‘And they lived happily ever after – or did they?’ appears at the end of all of this and we wonder, of course, what exactly is the point and plot of what we’ve just watched.  The answer comes much later, at the film’s end.  Sturges takes us forward several years in time then to 1942.  An elderly couple are being shown an apartment in New York City.  Gerry (Claudette Colbert) is still in the apartment and has to hide as the hard-of-hearing husband scrupulously examines the rooms and bathroom.  Finally revealing herself, she tells the old man some of her down-on-luck story.  Informing her that he is the Wienie King, the genial gent hands her a wad of cash to pay the rent and settle her outstanding debts.  Meantime, her husband Tom (Joel McCrea) is introduced to us as he attempts to sell his pretty zany idea of an airport suspended over a city by wires (which he claims will cost some $99,000 dollars). 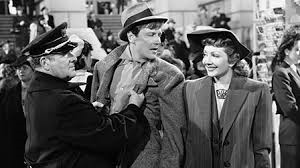 We get the first flavour of Sturges’ typically rapid-fire and highly amusing dialogue as Tom returns home that evening and questions Gerry about the Wienie King.  Gerry is adamant that their marriage is over because she may be holding Tom back in his entrepreneurial endeavours and also because generally she is a rotten wife – ‘You know we don’t love each other anymore.  We’re just habits, bad habits.’  Tom receives this in a droll fashion entirely befitting of a Sturges character – ‘You’ll always be a sister to me, huh?’  Despite spending the night together, the determined Gerry leaves the next morning and makes for Penn Station.  Tom tries to stop her and again here Sturges takes the opportunity to throw in some wonderful lines as delivered by passing characters who are absolutely peripheral to the story.  ‘Why don’t you two learn to get on together?’ an Irish-sounding cop advises them.  A taxi driver informs Gerry that Palm Beach in Florida is the best place to go for a quickie divorce at this time of year.  On arrival at the Station, Gerry hooks up with a gentleman’s club called The Ale and Quail Club.  Anyone with even the vaguest knowledge of Sturges’ work will realise that this will lead to further trouble and complication for the film’s heroine.  Such indeed is the case later that night as the older men have a little too much to drunk and begin shooting objects in their train car.  There’s a wonderful scene in which the less inebriated among them regale Gerry with a song.  This is then followed by a wonderful sequence in which Gerry finally flees the car and the trigger-happy members of the club pursue her through the train as if they were on a hunt. 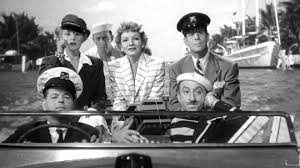 Back in New York meanwhile, Tom himself has encountered the Wienie King who gives him the price of an airline ticket to Florida.  Gerry, for her part, meets John D. Hackensacker III (Rudy Vallee) who offers her assistance after the car she was in (containing the members of the Ale and Quail Club) is uncoupled from the rest of the train.  Hackensacker appears at first glance to be somewhat tight-fisted as regards money (he meticulously keeps an itemised list of everything he spends), but in Jacksonville Gerry soon realises the extent of his wealth and generosity as he lavishes her with expensive clothes and jewellery.  Hackensacker – as it turns out – is one of the richest men in the world; he takes Gerry to Palm Beach on his boat (named the Erl King) and begins to woo her in a most unconventional fashion.  ‘Was he brutal to you?’ he asks as Gerry tells him about her husband and plans for a divorce.  Appearing in his first Sturges film, Vallee is wonderful here as he promises to beat Tom up if ever he should meet him – ‘That’s one of the tragedies of this life – that the men who are most in need of a beating up are always enormous.’  Tom is waiting in Palm Beach as The Erl King docks and so too is Hackensacker’s sister The Princess Centimillia (Mary Astor), who has more than a slight predilection for both marriage and divorce. 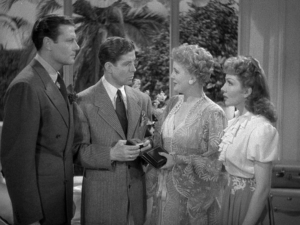 Thinking fast – as only a Sturges heroine would do – Gerry introduces Tom as her brother, Captain McGlue.  She eyes out an opportunity whereby Hackensacker might help finance Tom’s extravagant airport idea.  The latter is far from convinced, but goes along with the ruse.  Matters, of course, are further complicated by the fact that the Princess Centimillia has taken quite a shine to him – ‘Nothing is permanent in this world – except for Roosevelt,’ she tells Hackensacker when he suggests that she would only end up getting divorced once again.  The latter professes his love for Gerry and – availing of the actor’s not insignificant singing talents – Sturges has his perform a wonderful version of Goodnight Sweetheart, Goodnight below Gerry’s balcony that same night.  This romantic gesture, however, backfires badly for him as Tom and Gerry reunite.  ‘I hope you realise this is costing us millions,’ she tells him as they decide to give the marriage another go.  In the film’s closing scene, the next morning, Gerry and Tom reveal to Hackensacker and the Princess that they both have identical twins.  ‘That’s another plot entirely,’ Tom remarks with reference to that previous opening credit sequence.  Sturges offers us no further exposition on this, but the implication seems to be that wrong people may have wound up marrying each other.  This idea is further reinforced in the final image at the altar as Hackensacker marries Gerry’s sister and the Princess marries Tom’s brother.  The respective siblings look bemused to put it mildly.  The same title card appears as the film closes – ‘And they lived happily ever after – or did they?’ 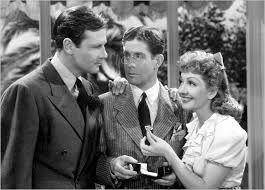 Positioned between 1941’s Sullivan’s Travels (my own personal favourite of the director’s) and 1944’s The Miracle of Morgan’s Creek, The Palm Beach Story offers further evidence of how Sturges was a master of the screwball comedy format considering his deft direction and peerless dialogue.  Who else but the Chicago-born filmmaker could write such wonderful lines as that delivered by the Wienie King as he comically contemplates the transience of life – ‘Cold are the hands of time that creep along relentlessly, destroying slowly but without pity that which yesterday was young.’  This is screenwriting of the very highest order and it permeates The Palm Beach Story throughout as its memorable character barb, woo and generally knock against each other in a highly amusing fashion.  The second of Sturges’ and McCrea’s collaborations together (Sullivan’s Travels and The Great Moment were the other two) sees that actor in particularly fine form and he’s bested only by Claudette Colbert in the acting stakes.  The It Happened One Night Oscar-winning star made only one film with Sturges (in which he served as both writer and director) and she’s in top form in her sharp exchanges with McCrea and pseudo-romantic scenes with Vallee.  A particular mention should be made of the latter’s performance as well.  This was his first full-blown comedic turn and Vallee does not miss a beat; he’s vulnerable yet ever so slightly scathing (of certain individuals and practices) in equal measure.  ‘Tipping is un-American,’ he declares in such a vein and here again is an example of one of Sturges’ beautifully idiosyncratic creations as realised on the big screen.  It’s interesting to note, but not at all surprising, that – given its subject matter – The Palm Beach Story did not exactly endear itself to the Hays Office.  The censors of the day did not take kindly to Sturges’s original title for the film – Is Marriage Necessary? – and further changes were forced upon the writer-director with respect to the ‘light treatment of marriage and divorce.’  They were none too impressed by the similarities between the character of Hackensacker and John D. Rockefeller either.  But, fortunately, Sturges’s working script was eventually approved and went on to become one of his very best films.  The early 1940s were without doubt his own golden years as he delivered gems such as this one and Sullivan’s Travels, Christmas in July, The Lady Eve, The Miracle of Morgan’s Creek and Hail the Conquering Hero.  It’s such a shame that the writer-director’s professional decline set in much too soon following this spate of brilliant comedies.  He was indeed ahead of his time and, thankfully, films such as The Palm Beach Story remain timeless.  It thoroughly deserves its place on the American Film Institute’s list of 100 Funniest American films Of All Time (number 77).  Check it out and several other works from this era by the great writer-director.