Movie Retrospective: The Trouble with Harry 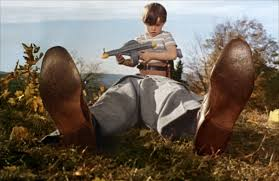 Alfred Hitchcock’s 1955 black comedy The Trouble with Harry begins with a small boy appearing on the horizon of a lush autumnal landscape.  The setting appears idyllic, the colours and attendant sunlight are rich and vibrant.  Then a series of gunshots are heard bursting into this glorious vista.  Uncertain surely of where they have come from, the small boy nevertheless discovers the body of a suited man with wine-coloured shoes.  Apparently unfazed by this, he moves on in an entirely carefree manner.  An older gentleman Captain Wiles (Edmund Gwenn) then appears with a rifle.  Unlike the one carried by the boy, his is the real thing, and he immediately frets at the sight which beholds him.  ‘Mother always said I’d come to a bad end,’ he reflects believing that he is the one responsible for an unintended homicide.  An envelope in the man’s jacket informs him that the deceased is Harry Worp, but the name means absolutely nothing to the agitated Captain.  In a continuation of this amusing sequence of entrances and exits, the director next introduces us to the character of Miss Gravely (Mildred Natwick, who should be familiar to many viewers from a number of John Ford films such as The Quiet Man).  Just like the boy, she is uncommonly calm and asks what has happened.  ‘What you might call an unavoidable accident,’ Wiles offers as a reply.  The Captain entreats her not to tell anyone about this, and an unexpected bonus comes about when she invites him to afternoon tea with blueberry muffins.  ‘If I were going to hide an accident, I wouldn’t delay,’ she advises the Captain as she leaves promising not to share this scene with anyone else. 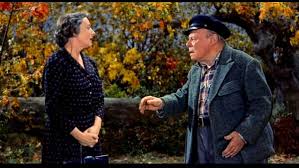 Hitchcock and his screenwriter on this particular film, John Michael Hayes, barely give us (or the Captain) time to draw breath as the boy returns with his pretty mother Jennifer Rogers (Shirley MacLaine in her feature film debut).  The woman clearly recognises the dead man, but thanks ‘providence’ for his passing.  ‘He’s in a deep wonderful sleep,’ she tells the boy.  Meantime, the Captain – now in hiding – wonders, as we do, who might turn up next.  ‘Couldn’t have more people here if I sold tickets,’ he observes as the eccentric book-fixated Dr. Greenbow comes along following the previous departure.  The good doctor trips over the body, but ambles on once again.  The first individual who takes advantage of this situation is a passing tramp who decides to relieve the deceased of his pristine shoes.  There’s a nice shot of Gwenn picked out by Hitchcock’s camera as he expresses mild disgust at this act.  Harry’s feet are now reduced to a pair of blue socks with red tips.  It’s entirely in keeping with the wide canvas of colours lovingly captured by cinematographer Robert Burks (who collaborated with Hitchcock on a number of films and, incidentally, won an Academy Award for the director’s other feature of 1955, To Catch a Thief). 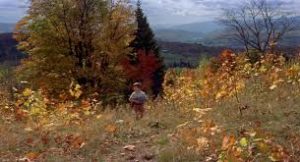 A respite from this event-laden opening finally comes as we are introduced to Sam Marlowe (John Forsythe) in the nearby village.  Marlowe is a struggling artist who can only afford a half pack of cigarettes, but he is entirely insouciant in nature and it is this very quality that some of the other characters in the film will come to depend upon.  In line with such a nonchalant attitude, Marlowe fails to notice the evident interest a well-dressed man is paying his paintings.  Instead, he devotes his energies on giving Miss Gravely a makeover for her impending date.  But Marlowe soon happens upon Harry’s body as well as he spots the corpse whilst outlining his next work of art; he subsequently sketches the dead man’s face.  The Captain – who has been snoozing against a tree trunk – again pleads his innocence in spite of the seriousness of the situation.  Marlowe agrees that it was probably, ‘an accident…an act of God,’ even, ‘heaven’s will,’ perhaps, but points out that, ‘the authorities like to know when someone dies.’  Marlowe decides to approach Jennifer Rogers – who he only knows to see – and ascertain the exact nature of her relationship with Harry.  There follows a nice bit of sexual innuendo then as Marlowe learns that Wiles is Miss Gravely’s date for which she has been preparing.  ‘You’ll be the first man to cross her threshold,’ he states in an unmistakable wink and nudge.  ‘She’s a well-preserved woman,’ the Captain replies, ‘and preserves have to be opened.’ 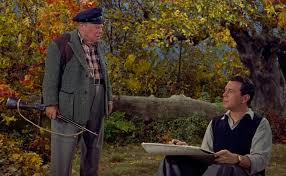 The suggestive dialogue continues and becomes even more titillating when Marlowe, the artist, visits the pretty young mother.  ‘I’d like to paint you nude,’ he tells her before enquiring as to the identity of the, ‘man up on the path.’  Jennifer explains that he is is her second husband Harry, the older brother of her first husband Robert who is also dead and was Arnie’s biological father.  In one of the film’s many hilarious passages, she explains how her marriage to the dutiful but incredibly boring Harry collapsed after just two days.  ‘You can stuff him for all I care,’ she replies when Marlowe asks what they should do with the dead man.  A possible cause of Harry’s demise comes about as Jennifer reveals how she had struck him on the forehead with a milk bottle that same morning.  But the now twice-widowed young woman seems even less concerned than Marlowe himself.  It’s a delightful performance by MacLaine who was just in her early 20s at the time.  The Academy Award winner displays an innate flair for comedy here which would go on to serve her well in future films such as The Apartment, Irma la Douce and Being There.  She’s well matched though by Forsythe who is suitably handsome and has oodles of charm to boot. 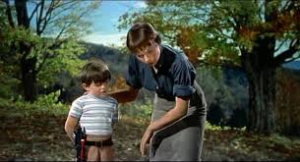 The wonderful strain of black humour which permeates the script and film continues as the Captain and Miss Gravely have their much-anticipated date at her house.  The topic of conversation somehow moves to her father whom, the Captain assumes, had a peaceful death.  ‘He was killed in a threshing machine,’ she replies without missing a beat.  Marlowe and the Captain subsequently return to dispose of Harry’s body, picking out a plot which they hope will not be detected by the local Deputy Sheriff Calvin Wiggs (Royal Dano) -‘Harry Worp don’t ever show your face around here again.’  But soon they establish the fact that the Captain may not have killed the unfortunate man after all on account of a dead rabbit which Arnie has given Marlowe.  And so begins a new cycle in the film involving temporary interrings followed by successive exhumations.  Not for the last time, Harry is dug up and then laid to rest again.  Matters become even more complicated (delightfully so I might add) as Miss Gravely confesses to the Captain that she may have killed Harry with the leather heel of her hiking shoe.  In spite of his deep reservations, and aching limbs, Wiles agrees to take shovel in hand once again.  The four conspirators come together and decide to lay the ever-surfacing Harry beneath the Vermont soil once and for all (at Marlowe’s suggestion as he fears Jennifer will be exposed to unwanted publicity in the newspapers).  In the midst of all of this, a millionaire appears and purchases all of the artist’s works bizarrely abstract as they are.  There’s a beautifully-played scene here – especially by John Forsythe (never better) – as the typically easy-going Marlowe insists on gifts for his friends as opposed to any money.  The exact nature of his own request is withheld from us at this point as he whispers into the millionaire’s ear.  A knowing nod and a grin will make sense later on. 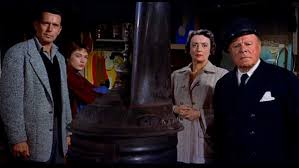 But the four are far from being in the clear yet as Hitchcock and Hayes toss in a smattering of suspense just to keep us on our toes.  Calvin Wiggs, the fastidious Deputy who restores vintage cars in his spare time, has found Harry’s shoes on the tramp and established the fact that something amiss may have occurred.  His suspicions mount and take on an unwelcome focus as he spots Marlowe’s sketch of the dead man from earlier in the day.  Marlowe, meanwhile, has proposed marriage to Jennifer and she has accepted.  But in order to re-marry, they realise that she must first prove her husband is dead – cue even more disturbed soil and spadework.  The idiosyncratic Dr. Greenbow materialises once again (reciting poetry now), but this time perceives the dead body in front of him.  They return to Jennifer’s house where the doctor has agreed to perform an examination as to cause of death; however, Calvin Wiggs visits with questions regarding Marlowe’s sketch – ‘Where did you paint it and who is it?’  The quick-thinking painter alters his work so that it appears his subject was alive.  Fooled and defeated, Wiggs departs, vowing however to pursue the matter.  The final twist in the piece comes with the doctor’s declaration that Harry died of natural causes.  The remaining four central characters – three of whom are now off the hook – concoct a plan for the following day whereby Arnie will again discover Harry’s body, only this time subsequently report his finding to Calvin Wiggs.  The Trouble with Harry ends on another sun-kissed day in the New England Fall as Marlowe, Jennifer, the Captain and Miss Gravely watch the young boy standing over the pesky corpse once more.  As Arnie departs, they share some personal information, including Marlowe’s request of the millionaire – a double-bed for him and his wife-to-be. 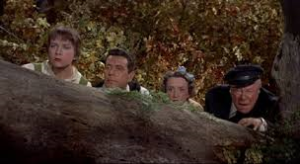 One of the few comedies Hitchcock made in his career (including – I would suggest – 1941’s Mr. and Mrs. Smith, 1976’s Family Plot and certainly many elements in 1935’s The 39 Steps and 1938’s The Lady Vanishes), The Trouble with Harry was a box office disappointment in its day, but remains as fresh and funny as it was some sixty years ago.  As I’ve already suggested, it’s one of Hitchcock’s most beautifully shot films (kudos to the aforementioned Robert Burks) and was also significant as regards this being the director’s first collaboration with Bernard Herrmann.  Herrmann’s score is a playful gem from start to finish (in keeping with the tone of Harry), but there’s also a delightful rustic streak which informs compositions such as Autumn Afternoon, The Country Road, Tea Time and Harvest Eve.  Based on the 1949 comic-mystery novel of the same name by Jack Trevor Story, The Trouble with Harry is certainly not typical Hitchcock fare with respect to its fusing of mystery, suspense, comedy and even romance; but buoyed by the note-perfect performances of Forsythe, Gwenn, MacLaine and Natwick, the stunning photography of Burks, rich score by Herrmann and the adroit flourishes of its helmer, The Trouble with Harry remains a most curious jewel in Hitchcock’s repertoire.  A black comedy to treasure over and over again.