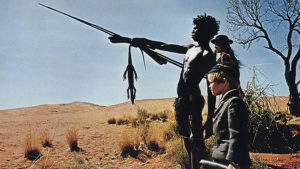 Based on the 1959 novel of the same name by James Vance Marshall, Walkabout opens with a title card which explains what this very concept is – a walkabout for an Aborigine male teenager entails living off the land for months and eating ‘of its fruit and flesh.’  In direct contrast to such a long-established ritual is the modern-day city which director Nicolas Roeg presents to us in the film’s establishing scenes.  There is brick and concrete, condominiums and functional architecture.  A brief shot of the iconic Harbour Bridge informs us that this is Sydney.  A teenage girl (Jenny Agutter) is seen in a classroom performing her breathing exercises.  She passes through a lush green park with her younger brother (Luc Roeg); a short time later they are framed playing in a swimming pool as their father watches them from a nearby balcony.  It’s a peculiar gaze which turns more sinister when the three are suddenly placed in the unmistakable setting of the Australian Outback.  A geologist evidently by profession, the father seems to be here to conduct some research.  But why has he brought his daughter and son along with him we ask ourselves.  It seems to be for a picnic as this is what the girl is preparing.  The young boy meantime is taken up with his playful pursuits.

All of a sudden, and quite inexplicably, the father produces a gun and begins firing at or very close to his children.  ‘Come out now,’ he demands as the girl takes cover dragging her brother with her.  This is not a game.  The adult male has lost his mind.  The car explodes and he commits suicide on the spot.  The girl sees this, but protects her younger sibling from the truth.  ‘He said we were to go on ahead,’ she tells the boy in an obvious lie.  Together, they head out into this harsh and forbidding landscape.  Darkness falls and they try and sleep.  Their prospects do not seem promising in this terrain and yet Roeg’s cinematography (he doubles as both director and director of photography here) picks out some stunning images of Australia’s vast and remote interior.  The creatures of the earth are a frequent presence which Roeg focuses upon.  Instinctual and part of this land, they form a contrast to the English-sounding girl and her brother who are aliens in this environment.  In a realisation along these lines, the girl begins to quietly despair as to their chances of survival.  ‘We can’t waste time,’ she tells the boy as he begins to physically tire.  Time indeed is against the two as much as the arid land is.  Although they happen upon a solitary tree with a pool of water beneath it, this is not sufficient to sustain them as it soon dries up.  ‘If we were superheroes, we’d definitely win,’ the boy observes before asking if they are lost.  Though never openly articulated, the answer to this question is simply yes.  The Europeans do not understand this land and so they are adrift and at odds with it.  The girl’s subsequent decision to remain at this spot seems to confirm as much.  The water is gone; how does she imagine they will survive by remaining stationary?  Movement is surely the only choice in such a scenario.  But she does not seem to appreciate this fact or chooses to ignore it.

An Aborigine teenager (David Gulpilil) then appears on the landscape as he spears a lizard.  He doesn’t speak their language and the girl is unable to communicate with him – ‘We’re English.  Where is Adelaide?’  The young boy on the other hand proves himself more resourceful as he conveys their need for water by means of a simple mime.  The Aborigine shows them how to draw it from the parched soil.  They leave the spot in his company and very soon he demonstrates how adept he is at living off the land.  When the boy gets sunstroke, the Aborigine assists him with a natural remedy.  In a return gesture, the boy tells him a story in spite of the language barrier.  The girl points out that this is something of a futile exercise as he doesn’t speak English.  But what she fails to understand is that this act on the part of the boy is in actual fact a worthwhile effort.  It signals that he – in his innocence – is more willing to reach out to the Aborigine and form a bond.  The girl appears to view the Aborigine as little more than a curiosity.  He’s essential to their survival and she will follow him until they reach some form of civilisation.  But Roeg and his screenwriter Edward Bond never overtly indicate what her feelings are regarding him.  Is she entirely impassive?  Does she view him as something other-worldly – just another fragment of this remote setting which she is not part of? 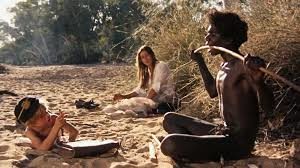 The Director’s cut of Walkabout features an extended sequence in which the girl swims naked in a pool as the Aborigine hunts elsewhere.  The location of the boy is not established during this time and there’s a discernible dreamlike quality to the juxtaposition which Roeg expertly stages.  Sexual awakening is a theme of Walkabout and it pertains to the girl and the Aborigine.  But there is no real prospect for any such relationship because these are individuals from entirely different cultures and backgrounds.  Although she appreciates the fact that the Aborigine is effectively saving her and her brother, the girl is quite rigid in her demeanour.  After this unexpected and perilous adventure, we have little doubt that she will return to school and her middle-class environs.  When the three discover a derelict building, Roeg does suggest some sexual tension between the girl and the Aborigine.  In contrast to this, however, is a scene in which she comes upon some old photos on a wall.  Although they are set in the past, this is a representation of her world which has certain norms and a definite order.  When the Aborigine sees her topless by chance, he initiates a mating ritual which is made manifest in a dance.  This continues overnight and puzzles the young boy – ‘What’s he dancing for?’  The girl replies that she does not know, but, of course, she does.  ‘We’re going on our own tomorrow,’ she tells her brother as she determines to break with their saviour.  Roeg has already shown us that civilisation is close at hand by way of a settlement which is nearby and the hunters whom the Aborigine sees as they thoughtlessly slaughter an animal.  The implication is quite clear in the girl’s words – they no longer require their accidental guide; he can be dispensed with in the same way that she hopes to forget this treacherous journey. 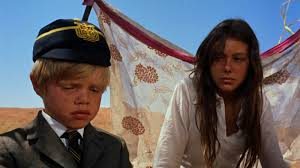 The boy and the girl dress in their school uniforms once again in a clear signal that they are returning to their world of sophistication and refinement.  As they depart, they discover the Aborigine hanging in a tree.  He has chosen to end his life just like their father.  Why has he decided upon such an extreme course we ask ourselves.  Why has despair replaced that wide smile and vigorous physicality?  Did he have designs on the girl all along?  Had he dared to imagine some meaningful place in her future?  In the novel by James Vance Marshall, the character dies from a flu contracted from the boy.  In Roeg and Bond’s adaptation the suicide – a much more dramatic act – infers, I believe, the impossibility for this individual to be assimilated into the world of progress and advancement.  In the novel, the children bury their Aborigine rescuer after his passing.  In the film, they simply walk away and leave him where he is.  The familiar sights of a road and electricity lines tells them that a community is not far away.  The Aborigine has served his purpose to the girl’s mind at least.  We see no tears on her part.  There is no farewell speech or expression of thanks.  Soon they will be back in the city.  The Aborigine will surely become a distant memory with the passage of time. 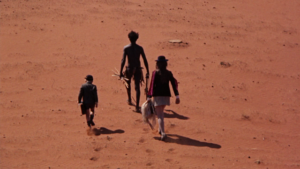 And yet Roeg suggests otherwise at the film’s close.  We move forward in time and the girl is now married, living in an apartment not dissimilar to the one we saw at the beginning of the film.  Her husband arrives home and rambles on about some happening or promotion at work.  The girl’s eyes glaze over and her mind drifts back to that time in the red centre.  Roeg takes us back to the pool, only this time she is there in a state of nudity with her brother and the Aborigine.  Personally, I think that this scene is a product of her imagination.  We have seen how the Aborigine reacted when he saw her merely topless.  And it’s difficult to conceive of the thought that she would display her body so openly in his presence.  Walkabout is a film about the clash of cultures and the eventual impracticality of different worlds merging or realising a harmonious balance.  The sister and brother do not belong in the Australian Outback with its creatures of the earth, its beating sun and relentless heat.  In a similar fashion, the Aborigine cannot become part of their world.  Walkabout is not a sentimental film; it is not a comedy or a meditation on the fish out of water.  At the film’s conclusion, the young woman – as she is now – has resigned herself to her middle-class milieu and patterns of behaviour.  Her reminiscing for a more simple time and environment suggests, I think, that she has become lost in some other way.  Is her life evolving in a commonplace manner which will involve suburbia, kids and an eventual sense of emptiness?  I think so.  Perhaps she now has a better understanding for why both her father and the Aborigine had ended their lives.  A Londoner by birth, Nicolas Roeg brought a European interpretation and sensibility to the Australian Outback and Walkabout was somewhat controversial in its day dividing critics who debated whether it represented a reaction to or an embrace of the country’s diverse culture and traditions.  The film is quite beautiful in its scope and the grandeur (and severity) of the landscape is to the fore at all times.  On set, Roeg employed an improvisational approach which serves the subject matter well – ‘We didn’t really plan anything – we just came across things by chance…filming whatever we found.’  Walkabout also benefits greatly from a typically gorgeous score courtesy of John Barry.  Lastly, I would mention the very apt use of Poem 40 from A.E. Housman’s A Shropshire Lad.  This is heard in the film’s final few moments as the girl imagines the idyllic setting of the pool and the three central characters in a state of nudity.  It’s an impossible dream as the film has finally suggested.  It’s a place and a state she may now desire, but can never be a part of – ‘Into my heart an air that kills, From yon far country blows: What are those blue remembered hills, What spires, what farms are those?  That is the land of lost content, I see it shining plain, The happy highways where I went, And cannot come again.’