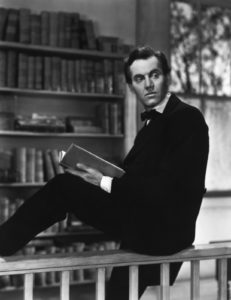 ‘If Nancy Hanks came back as a ghost, seeking news of what she loved most, she’d ask first ‘Where’s my son?, What’s happened to Abe?, What’s he done?’  John Ford’s partly fictionalised biopic concerning the early professional life of the 16th President of the United States includes many familiar elements of that director’s notion of America, his mythical sense of history and the typically broad canvas on which he sets out his cinematic vision.  The opening lines in the poem written by Rosemary Benet (as quoted above) are a perfect preamble to the events which Ford presents us with during the course of this his first collaboration with actor Henry Fonda.  The year is 1832 and the setting is New Salem, Illinois.  The central character is first seen addressing a small crowd.  Describing himself as, ‘plain Abraham Lincoln,’ he informs them that he has been selected as a, ‘candidate for the legislature.’  Of far greater import, however, is his acquiring of a barrel full of books from a family passing through in a covered wagon.  One of these publications relates to the law and its application.  ‘Maybe I’ll begin to take this up serious,’ Lincoln muses to himself as he peruses the pages.  Knowing his eventual place in history, we, the viewer, have no doubt that he will.  Ford and his scriptwriter Lamar Trotti signpost such pivotal moments with due historical regard.  The memorable music by Alfred Newman gives it all no little amount of emotional resonance. 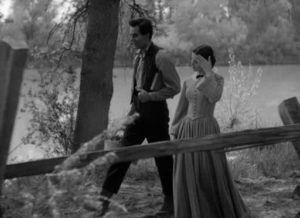 A scene of no minor consequence follows as Lincoln walks with his apparent first love Ann Rutledge.  The time of year appears to be summer – all is alive and vibrant in the lush countryside.  Ann encourages Abe to follow his wisdom and ambition.  We can have little doubt that she expects great things for him.  It’s a very folksy moment as Abe tells her how much he loves her red hair.  Ford’s films are typically replete with such sentiment and an abiding question remains to this day as to how much of this he intended to be profound.  A stark contrast occurs on the point at which Ann tosses a pebble into the nearby river.  It seems like a moment of entire insignificance, but as the circles ripple out in the water, Ford imposes a cut of some magnitude.  The once-flowing river of high summer is now mostly ice-laden.  Abe is by himself – alone and devoid.  He visits the grave of Ann who has passed away in the meantime.  History books tells us that she died in a wave of typhoid in 1835 at the much-too-early age of 22.  Lincoln, by all accounts, was devastated by this loss.  Ford and Trotti use this occasion to frame the beginning of his law career.  At a crossroads in his personal and professional life, the young man addresses the place where she is buried – ‘Well Ann, I’m still up a tree,’ he says, ‘can’t seem to make up my mind what to do.  Maybe I ought to go into the law.  Take my chances.’  In a moment of improvisation (but, of course, bear in mind that it’s no such thing on the part of Ford and Trotti), the future leader determines to allow a stick to make up his mind.  If it falls towards him, he will remain in New Salem; if it falls towards the grave, he will pursue a career in law.  The stick falls in the direction of the grave, but there’s more than a hint in Fonda’s bearing that he gives it a gentle nudge thus.  The implication seems to be that personal inclination has some sway in terms of greater destiny. 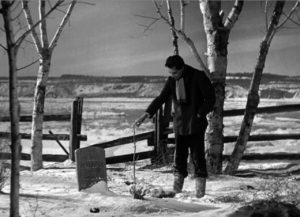 Ford’s enduring interest with the concept of community and social occasions is something that has been remarked upon time and time again.  Dances, festivals, historical anniversaries and general meetings are much in evidence in films such as 1946’s My Darling Clementine, 1948’s Fort Apache, 1949’s She Wore a Yellow Ribbon and 1952’s The Quiet Man.  In Young Mr. Lincoln the occasion is that of Independence Day in Springfield where Abe has now settled and practices the law.  Moments of typical Fordian humour ensue as the lawyer continuously tastes pies in a pie-judging contest and then cheats ever so slightly in a tug of war.  He also meets his future wife Mary Todd (Marjorie Weaver) for the first time.  Milburn Stone plays Stephen A. Douglas, the future Democratic Party nominee who would subsequently lose the 1860 presidential election to Lincoln. 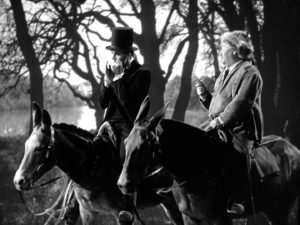 Ford’s film never intends to venture as far as this point, but instead concerns itself – in the main – with Lincoln’s defence of two brothers who are accused of murdering another in these early days of his career in Springfield.  The homicide happens the night of the Independence Day celebrations in the town and Lincoln is called upon to calm a baying mob intent on lynching the two who have been imprisoned.  ‘We seem to lose our heads in times like this.’ he tells them as he skillfully manages to restore order to the scene.  Taking their case, he insists that the boys deserve a fair trial.  There’s a wonderful shot picked out by Ford’s cameraman as the solemn figure of Abe stands apart watching the brothers being arrested.  In this single moment, the director calls our attention to his sense of public duty and fortitude.  Few film-makers could make visuals replace words as effectively as the four-time Oscar winner. 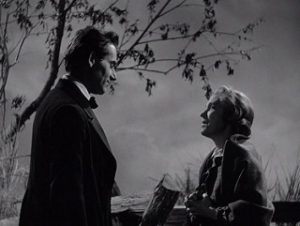 A sense of innate nostalgia is returned to as Lincoln visits the boys’ mother and their family.  Reminiscing about his former life and childhood days in Kentucky, he compares her to Nancy Hanks who died when he was only nine years old.  Mrs. Clay, however, refuses to answer his question when he pointedly asks her which one of her sons killed Scrub White.  The trial begins in earnest and Abe’s legal opponent is Prosecutor John Felder (Donald Meek).  A key witness in the case J. Palmer Cass (Ford regular Ward Bond) lies when he declares that neither he nor Scrub had deliberately provoked the Clay boys.  Another falsehood concerns his affirmation that Scrub’s pistol had remained in its holster throughout the altercation.  When Felder puts Mrs. Clay on the stand, he presses for an answer as to which one of her sons is guilty.  The idea that she might save one and sacrifice the other is something that is abhorrent to her and Trotti’s script importantly emphasises Lincoln’s understanding of this viewpoint – ‘I’d rather Mrs. Clay see you lose both your boys than to see you break your heart trying to save one at the expense of the other.’  Lincoln’s own background and his appreciation of familial ties has been skillfully established by Ford and Trotti in the context of such a declaration.  He understands how this is an impossible choice for the devoted mother.  The recalled Cass on the other hand has no such ties or scruples as he proceeds to identify Matt Clay as being the guilty party.  Later that same evening the judge in the case (Spencer Charters) visits Lincoln and attempts to convince him to engage a senior lawyer for assistance. 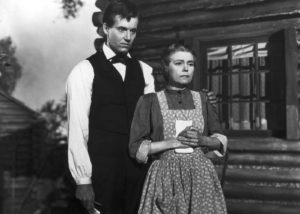 Defeat appears to be looming large on the horizon until Abe recalls the shifty Cass to the witness stand.  Recounting how the latter had stated that he could see the murder clearly on account of it being moon-bright, Abe hands him a copy of the Farmer’s Almanac.  Pointing out that the moon was only in its first quarter on the night in question, Abe accuses Cass of having killed Scrub himself.  With the spotlight of suspicion on him, Cass breaks down promptly and admits his culpability.  An impressed Mary Todd congratulates Lincoln as he leaves the courthouse.  Stephen A. Douglas, for his part, vows to never ‘underrate’ him again.  A foreshadowing of historical greatness and immortality is posited by Ford in the final memorable scene.  Upon bidding the Clay family farewell, Abe is asked by a friend if he is returning to the town.  ‘I think I might go on a piece,’ he replies as he gazes off into the distance, ‘maybe to the top of that hill.’  A lightning storm begins as he walks off in the same direction as the departing wagon.  The Battle Hymn of the Republic swells up on the soundtrack as Ford cuts to a shot of the Lincoln Memorial in Washington D.C.  We are left in little doubt as to the central purpose of his film.  The inception of a monumental political career in American history has been traced by him.  The seeming folk tale has become the stuff of legend.  Lincoln’s name and reputation will survive for all time.  He has indeed reached the top of that hill in a figurative and metaphorical sense. 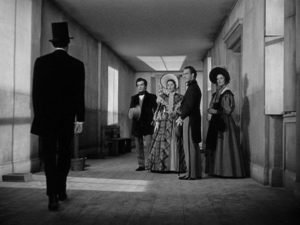 The year 1939 saw the release of three Ford films in total and it can, quite rightly, be regarded as something of a watershed in his long and substantial career.  As well as Young Mr. Lincoln, there was also Drums Along the Mohawk, which also starred Fonda.  Released earlier than these two, the director’s Stagecoach was the first western of his which he shot in his beloved Monument Valley.  The career of a certain actor named John Wayne received a much-needed shot in the arm.  Ford himself received an Academy Award nomination for Best Director.  He would go on to win successively in the years 1940 and 1941 for The Grapes of Wrath (which also starred Fonda) and How Green Was My Valley.  Young Mr. Lincoln has perhaps been overlooked somewhat when compared with such films of Ford’s and later entries in his body of work such as The Searchers and The Man Who Shot Liberty Valance.  But it most certainly deserves its place in any serious study of his career exemplifying, as it does, his penchant for historical storytelling in personal spaces with the thrust of epic at all times present and manifest.  In the central role, Henry Fonda has seldom been better capturing the humour of the famous man, his love for a particular way of life, but also his gritty resolve.  This is a film which endures as does the titular character himself.  A perfect synthesis of mythical storytelling and cinematic breadth.