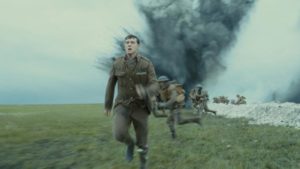 Sam Mendes’s World War I film 1917 begins in a relatively peaceful setting along a sector of the Western Front in northern France.  From our historical knowledge of the conflict and the sordid carnage which it entailed, we are only too aware that mortal danger is but a few hundred metres away.  Two lance corporals by the names of Blake (Dean Charles-Chapman) and Schofield (George MacKay), who have been napping in the tepid Spring sun, are awoken suddenly and ordered to report to General Erinmore (Colin Firth).  The mission which the superior officer tasks them with appears straightforward enough, but, of course, there is nothing simple in a protracted engagement such as this one: hand-deliver a message calling off an attack planned for the very next day or else a disastrous ambush by the enemy will ensue.  A personal motivation is also included – as if there were not reason enough – among the 1,600 men primed to fight is Blake’s own brother who is likely to perish if the two men do not succeed. 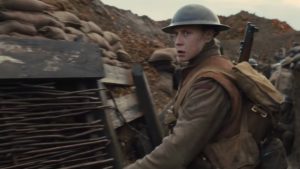 Films about the First World War have never been as prominent or as abundant as visual tales about World War II and director Mendes and his cinematographer Roger Deakins have chosen to address this issue head-on.  The trench warfare – which so defined this particular conflict on the Western Front and elsewhere – has never been an aspect of the Great War which has captured the imaginations of audiences or film-makers for that matter.  The lack of mobility and interminable stalemate, which were such prominent features, do not lend themselves readily to great narrative it seems.  Unlike the Second World War, there are no castle fortresses to be stormed, no double agents to be unmasked.  WWII films such as The Guns of Navarone and Where Eagles Dare simply do not fit because of the rigid scope which pertains.  Which is not to say that we do not have some classic WWI films such as Stanley Kubrick’s Paths of Glory and Peter Weir’s Gallipoli.  Mendes, Deakins and their technical crew have clearly considered this matter and thrown in a technical trick to propel the action and immerse the viewer in the horrors which are on full display.  Presented as one apparent continuous shot, 1917 follows the two lance corporals as they bid to complete their mission and save lives.  Along the way are sidebar moments and some episodic happenings which – for the sake of dramatic tension – detain them and threaten to derail the unenviable task allotted to them.  At an early juncture, for example, the older of the two, Schofield, lacerates his hand on a piece of barbed wire in no-man’s land.  Immediately, our concern for the character is that he may not be able to properly defend himself or discharge his gun owing to his injury.  When, a short time later, the same character inadvertently dips his wounded hand in the face of a dead soldier, the device being employed is quite plain to see: Mendes and his co-writer Krysty Wilson-Cairns are reminding us of the abiding horrors of war.  There’s nothing in the least bit subtle about the technique, but the desired effect is manifest and undeniable. 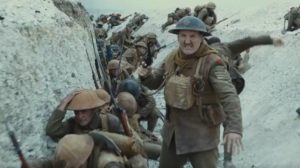 The extended shot trick (employed previously in films such as 2014’s Birdman) serves the story quite well as a whole, but it’s also something of a distraction at times when the viewer is attempting to pick out minor details in the frame which he/she believes might become pivotal to the action in the centre of the screen.  An aerial dogfight which Blake and Schofield witness from the perspective of a deserted farm is one such instance whereby action in the periphery quickly becomes critical to the immediate narrative.  The point has been made by other reviewers that this is a film about World War I which appears to cater for the visceral demands of the younger generations who have grown up on game platforms such as Playstation and X-Box.  So be it if that is part of Mendes’s overarching intent here.  The Oscar-winning director has dedicated his film to the memory of his paternal grandfather Alfred Mendes who survived two years of the Great War fighting in Flanders.  More than many, he would be cognisant of the fact that – with the passing of the centenary of the war – a natural decline in collective interest will occur as hearts and minds turn to focus on future commemorations and memorials.  The director deserves to be commended here for the personal story he has fashioned for the big screen, as well as the timely reminder that the lessons of history ought not to be discarded.  For all of its technical prowess and remarkable photography, 1917 has, at its core, a very fundamental and oft-repeated message to impart – war is ultimately futile and the cost in terms of human life does not justify the supposed rationale behind it. 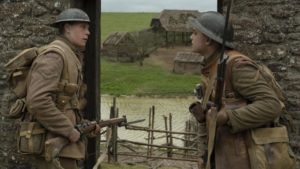 Shot in a relatively tight 119 minutes, 1917 is an undeniably immersive experience for the viewer and character empathy derives from the fact that we are only too aware of the perils that are lingering in every muddy battlefield and darkened trench.  The photography by Roger Deakins (extended shot aside) is a marvel to behold – sombre and encompassing in equal measure.  The musical score by Thomas Newman is propulsive when called upon by the film’s narrative and then suitably epic as the personal action of the piece embraces the larger conflict which surrounds it.  A number of familiar faces pop up in short cameos – Colin Firth (as I previously mentioned) is joined by the likes of Mark Strong, Andrew Scott, Richard Madden and Benedict Cumberbatch.  The more famous names happily do not chew up the scenery during their short stints on screen; the film belongs to George MacKay as the intrepid Schofield who appears in every shot (extended shot I should say of course).  The technical trick which underlies the overall proceedings might well be what many viewers take away from this one, but here’s hoping that they will also see fit to converse about the manifest themes of the film and its germane perspective apropos the nature and horrors of war.  Mendes clearly wishes to keep this particular discussion alive just as the centenary of the Great War gradually recedes.  His film succeeds on many levels and it’s a fitting tribute to his own family member and the members of countless numbers of families.