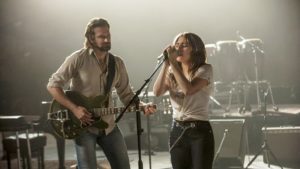 ‘Talent comes everywhere’ Bradley Cooper’s Jackson Maine tells Lady Gaga’s Ally at an early point in this – for the record – third American remake of the 1937 original film (which starred Janet Gaynor and Frederic March).  Jackson is a well-established singer-songwriter who performs to packed houses and sold-out venues, but the opening frames of Bradley Cooper’s directorial debut reveal a private person who has his inner demons in tow.  An alcoholic and habitual drug user, Maine depends on the substances to get him through the quotidian of his day.  One night after a concert, he finds himself partaking of a drink in a drag bar of all places.  There he witnesses first-hand the not-inconsiderable talents of Ally, a waitress who has aspirations as a singer-songwriter herself.  Following a spine-tingling version of La Vie en Rose, the two connect immediately and the script (co-written by Cooper himself with Eric Roth and Will Fetters) affirms how music brings them together as much as physical attraction.  As the title of the film suggests, the hitherto obscure member of the duo rises far beyond her expectations.  Viewers who have seen one of the previous versions (perhaps the 1954 George Cukor one starring Judy Garland and James Mason is the most famous) will know how this goes.  As one star ascends, so too does another decline. 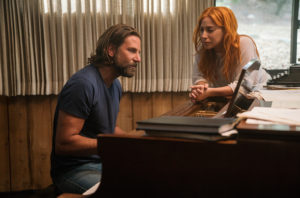 Cooper’s film does not attempt to deviate too far from the well-worked template here and this proves to be one of its innate strengths.  Impressed by Ally’s songwriting abilities and her knockout voice, Jackson positions himself as her enabler and facilitator regarding the music industry.  The scene in which he entices her onstage to perform Shallow is as grand a moment as one could hope to see in the cinema this year; and it works with great aplomb thanks to Cooper and Gaga’s considerable chemistry onstage and in their more private moments.  The contemporary allusions to fame and stardom meantime are well-placed and not without some amusing observations.  The following morning, Ally’s Dad Lorenzo (the well-cast Andrew Dice Clay) plays the performance back to his friends on social media; whilst bragging about the number of hits, he acknowledges just how often he has watched the piece himself.  This is a world which affords instant celebrity to those who get such lucky breaks, but Ally wants more than her fifteen minutes worth.  Aware of Jackson’s strong penchant for the hard stuff, she grasps at her opportunity to rise as the couple become a familiar presence onstage.  When approached by a music producer after one such performance, Ally realises the chance to break out by herself.  This is the career she has yearned for; this is the life she has chosen to embrace. 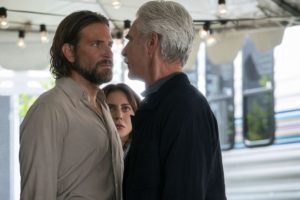 The first half of A Star Is Born is borne along with such gusto and attendant verve that we the audience barely register its passing.  Cooper’s direction and the efforts of his scriptwriting team form the basis for this, but it’s the sensational performances by him and Gaga which elevate A Star Is Born far above the ordinary.  The concert scenes are absurdly entertaining and the private moments appropriately affecting.  Even the cliche of a wedding proposal does not mar proceedings.  A terrific supporting cast serves to reinforce the task at hand.  The great Sam Elliott is pitch-perfect as Jackson’s older brother, chief handler and manager; Anthony Ramos shines as Ally’s friend Ramon and Dave Chappelle is worldly-wise as one of Jackson’s longtime buddies.  The second half of the story loses this dynamic somewhat as Ally’s career veers increasingly towards the mainstream.  It’s not the fault of Cooper or his writers, but this is the least interesting section of the story; however, I can understand why they have to tell it.  At heart a good man, Jackson can’t help his moments of jealousy and a vicious exchange between him and Ally emphasise how she can also overlook his sizable contribution to her career.  The veteran of the industry simply does not want his wife to sell out to the commonplaces or the trite influences.  ‘There’s one reason we’re supposed to be here is to say something so people want to hear’ he tells her.  ‘You just tell them what you want to say.’  The implication, of course, is that the popular and prevailing – the music industry at large in other words – can dilute such a highly personal and individual voice. 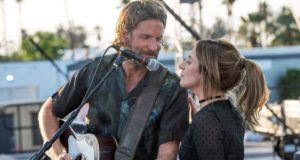 The early talk of Oscar nominations is well-warranted and I can already see deserving nods for Cooper and Gaga in the leads and Sam Elliott in the supporting category.  This is entertainment of the highest order punctuated by sterling performances and several catchy songs, the pick of which are the aforementioned Shallow, as well as Always Remember Us This Way and the jaw-dropping finale that is I’ll Never Love Again.  The music is well worth the admission price alone.  All the other elements contribute to one of the best films of 2018.