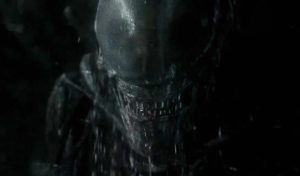 The second installment in director Ridley Scott’s Alien prequel series is set some 10 years after the events of 2012’s Prometheus.  For many viewers – myself included – one of the outstanding features of that latter film was the performance of Michael Fassbender as the meticulous and somewhat calculating android David (who, if you will recall, had more than a passing interest and resemblance to Lawrence of Arabia).  David appears in Covenant’s opening prologue as he is introduced to the world by his creator Peter Weyland (Guy Pearce also reprising his role from the previous film).  This is not so much a birth as an awakening as David is immediately able to play the piano and recognises his own creator’s desire to, in turn, uncover his own origins.  The sentient being takes the name David as he gazes upon a replica of Michelangelo’s statue of the same name.  Agreeing to assist his maker in his search for mankind’s creator, the just-activated android also brazenly reminds Weyland that – being human – he will die some day whilst he himself will live on.  It’s more than a hint as to the character’s overarching ego and how he will act as the story’s events unfold.  The setting then cuts to the colony ship named Covenant which is bound for a remote planet, Origae-6.  There’s another android on board this ship, Walter (Fassbender again), who is also tasked with the duty of monitoring the sleeping crew as well as the two thousand colonists and embryos on board.  An accident in space forces the early awakening of the crew (they’re still several years away from the new world) and causes the death of their captain (James Franco in a blink-and-you’ll-miss-him cameo appearance).  His second-in-command Christopher Oram (Billy Crudup) is a man of faith who has higher aspirations for the mission, but he doesn’t exactly convince in terms of leadership material.  When a radio transmission is intercepted from a much closer, but unknown planet, Oram receives this as a providential sign.  The perfect new world may just be at hand and, besides, the majority of his crew are reluctant to go back into deep sleep again following the loss of their captain.  The one dissenting voice is that of Daniels (Katherine Waterston), the widow of the departed and a terraforming expert on board the ship.  Unsuccessfully, she attempts to remind Oram of the expanse of their mission and the inherent dangers in diverting to another place.  But Oram’s mind is made up and a palpable sense of foreboding follows as the Covenant’s expedition team descend to the planet’s surface.

Fans of the franchise will have more than just a little recall as the crew land on supposed terra firma and amble their way through the mountainous terrain with a certain degree of trepidation.  Oram himself is the only one who is somewhat in raptures as to the possibilities he sees about him.  But his hope and faith are short-lived as two members of the expedition are infected with alien spores.  What follows is one of the film’s best set-pieces as one of the afflicted men makes his way back to the awaiting vehicle, only to have a pesky creature burst from his back in sick bay.  The resulting chaos – and attendant bloodshed – leads to the destruction of the landing vehicle and the deaths of several other individuals.  Just as the depleted party’s fate seems sealed, a mysterious hooded figure leads them away to a supposed place of safety.  He reveals himself to be David, the sole survivor of the aforementioned Prometheus mission.  But the discerning viewer will cotton on to the fact that there may be ulterior motives at play in David’s mission-of-mercy.  The barren city which is laden with corpses (full kudos here to the production design of Chris Seagers) is Scott’s visual clue that there is a past and an underlying malice which permeates the setting as a whole.  Indeed, David shows his hand quite soon as he lies about the manner in which the Engineer spacecraft carrying himself and Elizabeth Shaw crash-landed on the planet.  With respect to Noomi Rapace’s character from Prometheus, David also fabricates the story of her demise and that of the Engineers.  There’s a wonderful scene in which his android doppelganger Walter – who clearly has his suspicions – informs David of how he is a better spec in terms of his design and emotional processes.  The implication here is that the earlier model – David – has also become too human and too much like Weyland with respect to his grandiose notions and his over-reaching aspirations.  One is reminded of the android Ash from 1979’s Alien as the full extent of David’s experiments (involving mutations and hybrid designs) during his ten-year tenure on the planet become all too clear.  Like Ash, David too has a reverence for the creature’s form and single-minded purpose.  And again here a sequence from a previous Alien film comes to mind – remember the laboratory in 1997’s Alien: Resurrection and those failed attempts to clone Ripley?  If that doesn’t quite ring through, then consider the Queen embryo which Ripley herself was carrying in 1992’s Alien 3.  Recall if you will how those dastardly corporate types had it in their minds to create biological weapons.  David’s motivation in this latest chapter is of a like mind.  In a telling scene he shows Oram several pods advising of how they have been ‘waiting.’  Cue another familiar Alien moment as a facehugger wraps itself to the unsuspecting host’s face.  A noticeable difference between this and previous installments is that of how rapidly the creatures grow and burst forth from their victim’s bodies.  There’s barely a gestation period at all and they grow to full size virtually in the blink of an eye.  Clearly Scott and his writers – John Logan and Dante Harper – have put a strong emphasis in moving the piece along at pace in the greater interest of this ever-evolving prequel series.  The director has already been speaking of further chapters before it all ties in with the events of the 1979 film.  If Covenant performs strongly, then he will get his way.  Its ending is tailor-made for not just one, but further sequels.  And, without giving too much away I hope, there is the expected false ending before the real ending (and added twist) comes along to suitably whet the appetite for more. 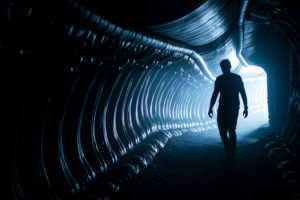 There are so many well-known Alien tropes, motifs and set-ups laced throughout Covenant that one cannot help but wonder if Scott and his writers are giving us a best-of collection here.  The template works because the director (who turns 80 later this year) is a past master at building on-screen tension whilst also delivery on expertly-staged set-pieces.  Complemented by the work of his regular cinematographer Dariusz Wolski, Scott once again presents us with a dark world in which technology and individual endeavour have overstepped the mark, particularly with reference to David’s twisted research.  As with Prometheus, there’s a wonderful performance by Michael Fassbender in the dual role of David and Walter.  The sizing-up scenes of the two are an especial delight with a standout passage in which David teaches his more practical-minded ‘brother’ how to play the flute.  Among the rest of the cast, Katherine Waterston fares just fine as Daniels.  There’s a certain rigidity with respect to any film franchise which one cannot deny.  We know the parameters of the piece, and, vast as the world it portrays is, there are set boundaries and fans of previous installments who must be indulged, just the same as newcomers should be suitably encouraged.  Scott walks this delicate tightrope quite well here delivering a fine entry in the series and one which – I would be personally confident – should ensure at least two more films in the coming years.  There’s a greater desire on the director’s part to move the narrative along and not get quite as bogged down in the theorising as Prometheus may have done.  Another more-than-satisfying serving of deep-space terror with a real monster at its very heart.  And I’m not referring to any of the Xenomorphs as I pass that final comment.