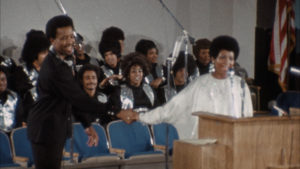 In January 1972 the then 29-year-old Aretha Franklin recorded an album of live gospel music at the New Temple Missionary Baptist Church in Los Angeles over the course of two nights.  Franklin’s star was high in its ascendancy at this point in time.  The Queen of Soul had enjoyed several hits in the 1960s by way of classics such as Respect, (You Make Me Feel Like) A Natural Woman, Think and I Say a Little Prayer.  Hers was a talent that knew no bounds and the fact that she had begun her prodigious career as a child singing gospel in the New Bethel Baptist Church in Detroit, where her father was minister, was no small matter of chance.  This was a woman who was simply born to sing, an entertainer who was destined for great things.  The 1972 live album of the same name which Franklin recorded over these two seminal nights in early 1972 was a concerted effort by the singer to return to these roots and pay her due regard at the same time.  The concert film which was directed by Sydney Pollack was Warner Brothers’ artistic endeavour to capture a musical greatness at the very peak of her powers.  Pollack himself was at a relatively early stage of his own formidable career.  He’d enjoyed critical acclaim and commercial success with 1969’s They Shoot Horses, Don’t They?  Three notable collaborations with actor Robert Redford would follow by way of Jeremiah Johnson, The Way We Were and Three Days of the Condor.  The Oscar-winning director (1985’s Out of Africa) was said to have been attracted to the project owing to the involvement of Franklin herself.  Intermittent shots of the director which appear during the 87-minute film suggest a man who was just as moved and awe-struck as the congregations who attended on both nights in question. 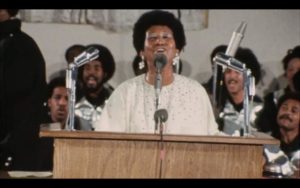 But Pollack was not a veteran of documentaries and he made the fatal error of not using clapperboards during the shoot (which, incidentally, captured 20 hours of raw footage using 16 mm cameras).  The result was a concert film which proved impossible for the editors to sync the audio with the video in post production.  Amazing Grace the album went on to become the biggest selling disc of Franklin’s entire career, as well as the highest selling live gospel music album of all time.  Amazing Grace the concert film did not fare quite as well.  Relegated to the dusty vaults at Warner Brothers until 2007, the belated release of the film was legally blocked on two occasions by Franklin herself.  The singer’s passing in August 2018 paved the way for this eventual release.  Quite why Aretha did not wish this film to see the light of day during her lifetime is something we will probably never know. 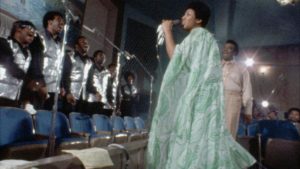 This is a live concert film to savour and much of that, unsurprisingly, is down to the star quality and vocal range of Franklin.  The singer is not given over to asides or sidebars during the concerts, but rather allows her emotion to flow through the chords and the elongated notes.  Legendary gospel singer the Reverend James Cleveland dominates the proceedings with respect to his addresses to the expressive congregation.  The supporting cast that is the Southern California Community Choir play more than their part in terms of accompaniment and demonstrative appreciation.  On the second night of the concerts, Aretha’s father C. L. Franklin delivers an eloquent homily of sorts.  Much of this speech concerns his daughter who sits silently in close attendance.  Shortly afterwards we see Franklin Senior mop his daughter’s brow as she performs with an unflagging zeal for the music which first stirred her as a child.  It’s a wonderful moment and one of several in a film which is inundated with images of fervour for the art form and passion for the teaching which informs it.  One suspects that more than a few – including Cleveland – shed a lot of sweat and more than a few tears over the course of the 48-hour period. 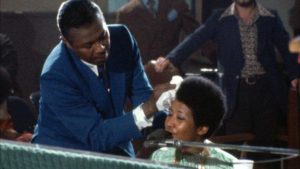 Franklin is on top form herself, but a noteworthy aspect of the film and the performance is her near-lack of interaction with the audience whom she fleetingly acknowledges and thanks.  It’s not an intentional ploy by the Queen of Soul I would suggest, but rather a simple expression of how immersed she is in the music.  High points as regards the playlist include What a Friend We Have in Jesus, Precious Memories, Climbing Higher Mountains, Never Grow Old and the titular Amazing Grace.  A split screen at one particularly emotive point of the concert compares the dedication of the singer to the abandon of two ladies who dance with glee in the aisles.  The second night footage includes a few sporadic shots of none other than Mick Jagger.  Fresh-faced and in the throes of his own popularity and stardom, the Rolling Stones frontman looks suitably impressed – almost reverential – at what he beholds.  No surprise in this.  A superlative performance by the late Queen of Soul and a first-rate concert film to boot.