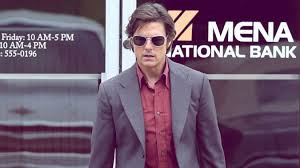 The second big screen collaboration between director Doug Liman (Edge of Tomorrow) and star Tom Cruise concerns itself with the activities of one Barry Seal, a skilled pilot and arms and drugs smuggler who became entangled with the Medellin Cartel in the late 1970s and early 1980s.  The lure of money and attendant success is the main premise here as we watch Seal flirt with various forces and authorities during his days of illegal activities.  A TWA pilot whose career is one of monotonous routine and often unsocial hours, we first encounter Seal as he is approached by a mysterious character calling himself Schafer (Domhnall Gleeson) in a darkened bar one night.  Schafer works for the CIA and is well aware of Barry’s prowess in the cockpit.  He convinces the ace pilot to fly reconnaissance missions over South America using a small plane with cameras installed.  All that Barry has to provide is photographic evidence of anti-Democratic forces which are active on that particular landmass.  He gets the honour to serve his country, but domestic pressures come to bear and he presses his employer for more lucrative rewards.  These do not seem to be on offer and Barry must think of his young family – his wife is already expecting their third child.  When the Colombian Medellin Cartel – in the personification of Pablo Escobar – intercept Barry and offer him an attractive sidebar, the pilot can hardly pass it up.  Seal will fly the Cartel’s cocaine into the United States, dropping it in some remote corner of Louisiana.  For every kilo delivered, he will be paid the princely sum of $2,000.  It’s quite a deal when one considers the time and place.  This is the very tail end of the 1970s.  Disco is very much in vogue.  Jimmy Carter still occupies the White House. 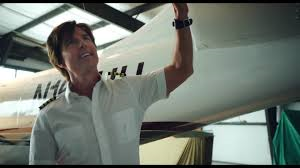 Based on Seal’s true life story (and subsequent assassination in February 1986), American Made is suitably breezy with a terrific performance from Tom Cruise at its very core.  We’ve become accustomed to a certain type of performance from the actor in recent years and it’s refreshing to see him cut loose and return to the cocky-type character that he used to play during another age of his respective and lengthy career.  This is the Cruise who can be superbly brash and and who sports that million dollar grin for which he is so famous.  He does not even vaguely resemble Seal himself in appearance, but that matters not a jot.  Cruise has fun in the role and, for the most part, Doug Liman’s film moves along at a rhythm which is in keeping with his suave demeanour and incessant sense of audacity.  When Seal is forced to move his family to Mena, Arkansas, we sense that this is but a slight inconvenience to him personally.  And yet he worries that his wife may up and leave with the kids immediately as he has provided no explanation for this apparently precipitous relocation.  Returning, however, with a bag full of cash, Barry is quickly able to convince Lucy (Sarah Wright) that a better life awaits them both.  The temptation of material possessions proves to be an alluring enticement for her, a former fast-food waitress.  The wads of cash increase in volume and soon Barry is struggling to conceal them in the back garden and any available cavities he can find in the house.  As the Reagan administration takes office in the nation’s capital, Seal is requested to run guns to the Contras in Nicaragua.  Quite quickly he discerns how disinterested many of them are in the cause.  This is yet another US-backed mission which smacks of little consideration and even less conviction.  The so-called anti-Sandinistas strip Seal of his boots and sunglasses on his first trip as he delivers arms.  Hardly the makings of a credible force as the powers-that-be hope they will become. 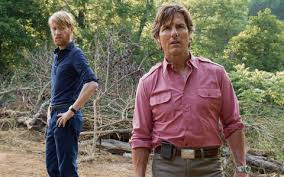 The controlled chaos that was US foreign policy during this period becomes even more apparent as Seal cuts a deal with the White House to implicate the Sandinistas as drug traffickers.  By this time he has rightly concluded that the Contras are not earnest in their affiliation to the cause and has instead begun to deliver guns to the Medellin Cartel.  Another actor might well have lost our empathy by this point, but Cruise holds our attention with his effortless charm.  In supporting roles, Gleeson and Wright also excel, but this is the Mission Impossible star’s show from first to last.  Increasingly a sense that he has taken on much more than he can handle dawns upon the character and Cruise ably channels the fatalistic attitude of one who realises he cannot run or hide.  When Seal provides photographic evidence of the Sandinista connection to the Cartel, his fate is effectively sealed.  The response he receives from the agents who have employed him in this particular task is a very familiar one with respect to its detached tone – you knew what the risks were he is advised, now live with the consequences.  The upshot for the central character was indeed grave and Seal paid a heavy price for his years of moonlighting and abandoning one side for the other when needs dictated such a strategy.  There’s nothing incredibly weighty in this film and yet it is tinged with a certain sadness as Seal resigns himself to his fate in the film’s climactic scenes.  Kudos here again to Cruise who delivers one of his more charismatic and engaging performances in recent years.  After 2014’s highly enjoyable Edge of Tomorrow, he might consider more collaborations with director Liman.  Fast and spirited as is the film’s brisk momentum.