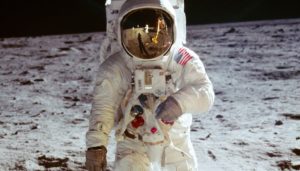 At an early point of Todd Douglas Miller’s documentary on the 1969 Apollo 11 mission, the very familiar voice of CBS anchorman Walter Cronkite is heard over the images of preparation as he describes this as ‘man’s greatest adventure.’  Miller’s new film on this key historical event is an entirely fitting and enthralling account of those pivotal days in July 1969 as astronauts Neil Armstrong, Buzz Aldrin and Michael Collins journeyed further than man had done hitherto.  Beginning with ground preparations prior to the July 16th launch from the Kennedy Space Centre, Miller’s film essays with a keen eye the level of detail and exactitude involved in this seismic mission.  One does not have to be an authority on the period to appreciate the incredibly meticulous work – and the numbers of individuals – which was involved.  Bereft of the traditional documentary staples of an overarching voiceover and retrospective interviews, Apollo 11 charts the chronology of the events by way of the archival footage employed.  Miller – the director of a previous documentary on Apollo 17 – was approached by CNN Films in 2016 to make a film for the 50th anniversary of the Apollo 11 mission.  The unearthing of unreleased 70 mm footage from the launch and recovery of Apollo 11 by him and his team serves this present film to great effect.  But so too do elements such as the accompanying score by Matt Morton and the crisp and seamless editing by Miller himself. 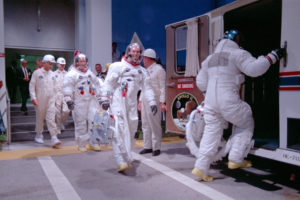 ‘Man’s greatest adventure’ has never felt so immediate and tangible in spite of the 50-year gap which comes to pass on the 20th July, 2019.  A feeling of historical magnitude informs the piece quite correctly, and this is further enhanced by the drama which Miller infuses by way of some critical moments which punctuated the mission.  A leaky valve, which was discovered prior to the 16th July takeoff, gives pause for thought in the viewer’s mind.  Will the spaceflight take place at all?  Will this be yet another moment of deferral against the backdrop of potential history-making?  The eventual narrative outcome is as clear as the sinking of the Titanic and yet the viewer is forced to question such things.  Of no less dramatic impact is the eventual touchdown of the Eagle on the surface of the moon as Armstrong and Aldrin vied to find a clear patch of ground suitable for their landing.  The low fuel warnings which are heard repeatedly again raise queries as to whether the landing will be viable.  At Mission Control the remark by Charles Duke that ‘You got a bunch of guys about to turn blue’ serves to highlight how precarious the endeavour was at times.  Miller’s carefully-chosen archival footage of the control centre serves to emphasise the vast numbers of technicians involved and the sheer bulk of technology.  From a 50-year perspective, the sheer awe factor is no less diminished.  This was a total effort of infinite proportions conducted by men who were wholehearted in their level of commitment. 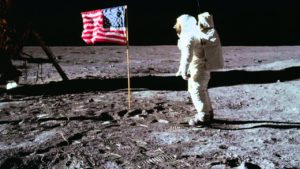 This is a deeply edifying experience which, thankfully, is not without its moments of jocularity.  The aforementioned comment by Duke has a smidgen of humour to it, but one can also imagine the stark consequences which would have arisen had the mission failed in its central purpose.  A genuine moment of lightheartedness (which elicited a warm response from the audience) occurs as Aldrin descends the ladder of the Eagle and comments upon his attentiveness not to close the hatch door behind him and lock the two men out of the capsule.  Of greater historical import of course is the 1961 speech by then president John F. Kennedy to a joint session of Congress which the film references at an early juncture and then replays following the the return to Earth of Armstrong, Aldrin and Collins.  It’s one of the more obvious insertions of Miller’s film, but entirely appropriate with respect to the contextual backdrop.  Kennedy’s challenge that a mission of this type would be accomplished by the end of the decade takes on an even greater sense of urgency when one considers that the Apollo 11 mission took place in July of 1969.  Miller’s documentary accentuates the relevance of the achievement whilst also picking out the period of the epoch with some telling shots of the crowds who witnessed the takeoff and those who assembled to view the astronauts’ return.  At one point a news segment heard over the soundtrack reports on the on-going war in Vietnam and the death of Mary Jo Kopechne at Chappaquiddick Island on the 18th July, 1969.  Such brief allusions tell us more than enough about Miller’s consummate skills as both a documentary film-maker and a storyteller generally.  In his capable hands these era-defining days of July 1969 are rendered more significant once again and the viewer is left suitably gobsmacked by the sheer enormity of the venture.  ‘Man’s greatest adventure’ – quite possibly.  A superb documentary film on a moment of great historical merit – absolutely no doubt as far as this reviewer is concerned.