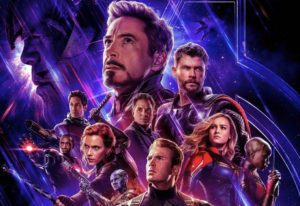 The culmination of a 22-film story arc was never going to be an easy thing to pull off, but the Russo Brothers (Anthony and Joe to you) have pretty much done it with Avengers: Endgame – the fitting sequel to 2018’s Avengers: Infinity War.  A few preliminary things to make note of – Endgame is not a short film.  With a running time of some three hours, it must surely rank as the longest superhero film in cinematic history and – as with previous Avengers films (even more so now) – there is a plethora of characters and subplots to digest.  And it’s slow – almost ponderous in parts.  One full hour into the film, the viewer may very well be asking himself/herself how long it will take before the main act commences.  Well, it takes some time to be quite honest.  With so many characters and disparate pieces of narratives, the filmmakers have made the decision to take their time with the piece.  As with previous films in the Marvel Cinematic Universe generally, the quieter, less frenetic moments prove to be the most heartfelt and provide the best moments of humour.  Naturally, we will laugh when Tony Stark refers to a now-bloated beer-guzzling Thor as ‘Lebowski’; of course a certain level of pathos will be evoked as Captain America encounters his beloved Peggy Carter in the past. 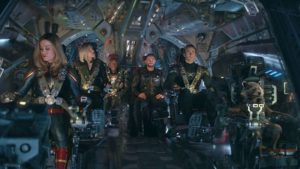 Unless you were eking out a solitary existence in some remote corner in 2018, you will recall the pivotal events of Infinity War.  The rather ugly intergalactic warlord that was Thanos (Josh Brolin) succeeded in acquiring all six of the powerful Infinity Stones.  He then snapped his finger.  Half of all life in the universe came to an abrupt end.  Iconic MCU characters such as Spider-Man and Black Panther disintegrated and were no more.  Endgame commences some three weeks after the events of Infinity War as the survivors try to process what has happened.  There is much soul-searching and not a little self-recrimination.  In the words of Tony Stark (Robert Downey Jr.) the Avengers have failed once again – they only act when it’s much too late.  A mission to an uninhabited planet where the now-weakened Thanos resides does not serve to improve matters.  We skip forward in time by five years and the remaining superheroes have mostly gone their separate ways.  Thor (Chris Hemsworth), as I previously mentioned, has let himself go entirely and consumes the contents of a micro brewery on a weekly basis.  Stark, meantime, has discovered domestic bliss by way of a young daughter.  The always excellent Mark Ruffalo portrays a new screen iteration of Bruce Banner/Hulk – one that has managed to balance his two conflicting sides.  Only Captain America (Chris Evans) and Black Widow (Scarlett Johansson) retain some vestige of hope for reversing the seismic effects of Thanos’s snap.  The earth itself is depicted as a world which has not moved on in the intervening five years.  City streets are noticeably devoid of activity; the absence of progress is palpable in the dimly-lit interiors captured by cinematographer Trent Opaloch (collaborating with the Russo Brothers on an MCU film for the fourth time). 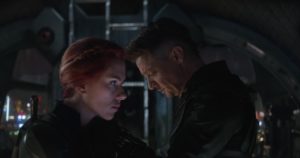 The second hour of the film involving time travel is more visually demanding of the viewer as some of the events of previous MCU films are revisited.  There are several cameos for characters who we know are long since dead.  Familiar faces such as Robert Redford and Natalie Portman appear onscreen quite briefly.  At other key moments some of the key players encounter the past versions of themselves face-to-face.  This type of device does not exactly lend itself to fluid film-making (just recall Back to the Future 2 if you will), but the Russos just about pull it off in spite of the attendant clutter.  The third hour/act is far more satisfying, although there is the old complaint on this reviewer’s part that the special effects/CGI are a tad overwhelming and sometimes confusing.  The final battle with Thanos is managed with great aplomb and the film-makers deserve their kudos for the emotionally-satisfying end.  Again, I will return to my previous remark that the MCU films work best during their smaller scale, more intimate moments.  The story arcs for Iron Man and Captain America deserve particular praise in this respect.  Downey Jr. and Evans have seldom been better in their respective roles.  As the increasingly corpulent Thor, Chris Hemsworth also excels and elicits some of the film’s best laughs. 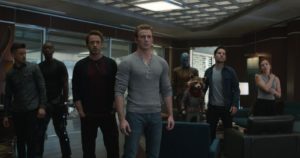 This is a thoroughly satisfying finale to the present iteration of the Avengers film series and the directors have nailed it with regard to emotional resonance and generally cohesive storytelling.  Yes, it’s big and bombastic at times, but could we have expected anything else?  Did we really want something subtle or underplayed?  With an estimated budget of some $356 million, Avengers: Endgame is one of the most expensive films ever produced, but largely it’s up there on the screen thanks to its excellent ensemble cast and carefully-constructed set pieces.  With a box office haul of $2.5 billion (at time of this posting), it’s also the second-highest-grossing film of all time and might yet catch James Cameron’s Avatar at number one.  The Avengers – in their current format – may well be done, but the MCU no doubt will carry on for the foreseeable future.  A superhero film with the emphasis firmly on super.