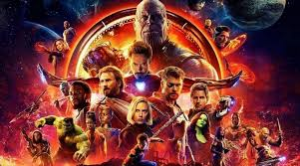 The nineteenth film in the Marvel Cinematic Universe is here and it’s big, ambitious in scope, gargantuan in terms of its visual effects and production values and, for the most part, works quite well in spite of its excessive length and proliferation of characters.  Set quite soon after the events of Thor: Ragnarok, Infinity War begins with the ship carrying the survivors of Asgard’s destruction being set upon by the relentless Thanos (Josh Brolin) and his henchmen.  A superhuman being who wishes to gain omnipotent power and universal control, Thanos is seeking out the six infinity stones which will allow him to wipe out half of all life in the universe.  This will bring ‘order’ according to his quasi-religious philosophy and he believes himself to be on a divine mission to carry this out.  Elsewhere – on Planet Earth to be exact – having been warned of Thanos’s malevolent mission by Bruce Banner (Mark Ruffalo), Stephen Strange (Benedict Cumberbatch) seeks out the help of Tony Stark (Robert Downey Jr.).  The fate of the planet at large is at stake he warns if the Avengers and their superhero acquaintances don’t quickly pool their resources.  Before Stark can even contemplate the idea of calling his estranged friend Captain America, New York City is under threat from a spaceship which vaguely resembles the design of the one from Stanley Kubrick’s 2001: A Space Odyssey.  It’s not long before Stark and his allies – including Tom Holland’s Peter Parker/Spider-Man – realise the mammoth task which befalls them and the more than worthy adversary that Thanos is.  Time to throw some more superhero characters into the mix I hear you say?  Well, that’s exactly what the filmmakers do here by engaging the likes of the Guardians of the Galaxy, Black Widow (Scarlett Johansson) and Black Panther (Chadwick Boseman).

One cannot help but admire the drive and determination of directors Anthony and Joe Russo with respect to all of this.  The Russo brothers are well versed in the MCU of course having previously directed 2014’s Captain America: The Winter Soldier and 2016’s Captain America: Civil War, but the nature of their task here is to bring together a myriad of characters and disparate subplots and strike a suitable balance and tone which will inform the emotional weight of the piece as well as propelling its narrative trajectory forward in an appropriate way.  Have the siblings from Cleveland, Ohio succeeded in this respect?  The answer is mainly yes, but Infinity War is not a movie of perfection, nor is it the best film the MCU has given us to date.  For one thing, the film is weighed down by the sheer number of characters and feels somewhat bloated with regard to its running time and planet-shifting story.  The fact that it’s merely the first part of a story should tell you enough about how it’s likely to end too.  Without divulging too much about the plot, it suffices to say here that an overall defeat is suffered by our superhero stalwarts.  In that latter regard Infinity War aspires to be a film in the vein of Star Wars: The Empire Strikes Back if you will.  Losses are sustained and there are even some notable demises as events unfold.  Curiously enough, the directors and their screenwriters (Christopher Markus and Stephen McFeely) do not in any way focus on the implications of this Infinity War for mankind as a whole or regular civilians.  Truth being told, there’s simply not enough time for this.  One of the film’s most affecting scenes occurs by way of a flashback involving Zoe Saldana’s Gamora (as a young girl) and Brolin’s Thanos.  It’s a strangely compelling moment and one of the few occasions in which the filmmakers have an opportunity to linger and develop the antagonist’s character beyond the one-dimensional.

This being a Marvel movie there are no scarcity of quips and one-liners which have become the norm and audience expectation of these particular entertainments.  And so Tony Stark is still playing the reluctant surrogate father to Peter Parker; and Stark and Stephen Strange (the wizard as he’s referred to) simply don’t get along; elsewhere, there is genuine mirth in the banter which takes place between Thor and the Guardians of the Galaxy.  When the king of Asgard (who lost an eye you will remember in 2017’s Thor: Ragnarok) reveals that he can speak the language of Groot, Chris Hemsworth’s elaboration on this fact is delivered with deadpan perfection – ‘They taught it on Asgard.  It was an elective.’  In other places however the humour of Infinity War is obvious and somewhat overplayed at times.  As a Marvel film generally, Infinity War does not have the self-effacing, even mocking tone, of last year’s Thor: Ragnarok.  With a budget estimated to be in excess of $300 million (one of the most expensive of all time), one would suspect that the Russos and their writers were under orders (and under pressure) to deliver a very specific kind of film with few opportunities for digression or improvisation for that matter.  This is a film laden with larger-than-life personalities which is constantly striving to deliver bigger and bigger moments.  And it’s only the first half of an overall two-parter as I’ve noted earlier.  The currently untitled sequel is due to be with us in early May of 2019 and those Russo boys will again be acting as co-helmers. 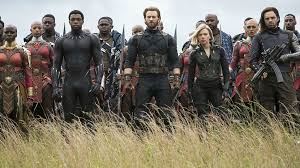 2018’s Black Panther was rightly praised for the nature of its emotional resonance and cultural significance and the climactic battle which occurs on earth transports the viewer back to the advanced nation of Wakanda which postulates as a Third World country.  The inevitable showdown between Thanos’s forces and those led by Captain America and T’Challa/Black Panther is one of the best set-pieces which Infinity War has to offer and the Russos underline their design and technical prowess by way of a tightly-edited sequence which is counterpointed by events occurring on the decimated planet of Titan and involving Stark and others in a direct conflict with Thanos.  The ending of Infinity War took some of my fellow viewers by surprise I do believe, but it was entirely in keeping with the film’s intended and inevitable downbeat conclusion.  Those who sighed quite audibly as the lights went up have only a year to wait.  Tony Stark et al will no doubt return to battle Thanos in 2019.  The Avengers may be subdued for the present time, but our current age of cinema decrees that they will live to fight another day.  For the foreseeable future, the MCU is here to stay.  These superhero guys are making oodles of money and they certainly will not go quietly into the night.  To infinity and beyond perhaps.