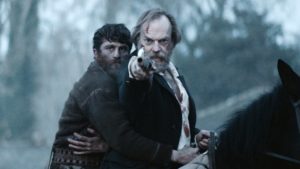 The very title of director Lance Daly’s 2018 historical revenge-drama film has a particular resonance for Irish people all around the world and of all walks of life.  The year is 1847 and the country is in the very worst throes of the Great Famine which has been raging since 1845.  Taking his cue from many a past filmmaker dealing with a specific historical context, Daly and his fellow storytellers pick out a narrative which is focused and immediately felt.  A former Connaught Ranger by the name of Feeney (Australian actor James Frecheville) has returned to the scene of desolation in the west of Ireland.  The aura of deprivation is unmistakable.  Families are forced from their homes and innocents starve on the roadside; the stark landscape has an unmerciful quality; gaunt faces are a prevalent spectacle in the lens of cinematographer Declan Quinn.  The motivation for the central character is quickly supplied in this tight and well-paced exposition.  Feeney’s mother has succumbed to the rampant starvation which is all around; his brother has been hanged after stabbing a bailiff during the family’s eviction.  Elsewhere, we are introduced to the character of Hannah (Hugo Weaving) – a member of the RIC who is a tad liberal with his hands and forceful interrogation.  Following his own indiscretion, Hannah is offered a chance of redemption by hunting Feeney down.  It will hardly come as a major surprise to many a viewer to learn that the men have a shared past. 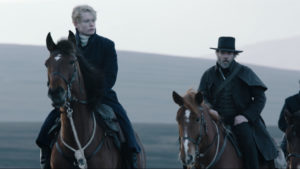 A revenge piece in the mould of a classic western, Black 47 has its origins in the 2008 Irish short film An Ranger.  P.J. Dillon and Pierce Ryan who collaborated on the former film are on scripting duties here again with Daly and Eugene O’Brien.  The action is suitably tight and controlled, the dialogue concise and to the point.  When at a later point in the film the character of the local lord played by Jim Broadbent articulates his hope that the Irish Celt will soon be as scarce as the Red Indian in Manhattan, we know for certain that we are in the realms of a western.  The indigenous population, like the Native Americans, are being pushed to the precipice of their endurance and toleration.  An intrepid hero must emerge as a focal point and as an expression of their determination to survive this period of mass starvation, disease and emigration.  Unsurprisingly, we hear many references to America and an alternative future in the New World.  In an early scene, Feeney suggests such an option to his brother’s widow.  The suggestion is again posited in the film’s penultimate scene.  Elsewhere, the filmmakers emphasise the utter sense of social injustice in a telling moment whereby one of the characters discovers that grain is being exported in spite of the unfolding human disaster.  The practice of offering soup in exchange for religious conversion is also tellingly explored.  It is also the occasion for one of the few moments of humour in the film as a minor character comments on how long they have been listening to the ‘shite’ expounded by the Protestant preacher. 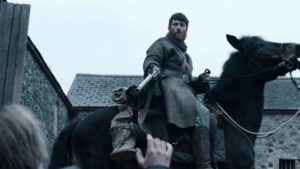 There are very few such light moments during the course of the 96-minute running time and understandably so.  This is not a subject matter which lends itself to the facetious or the frivolous.  No great surprise then that many of the cast members and critical pieces concerning the film have remarked upon how this appears to be the first modern-day feature pertaining to the Great Famine.  Why it has taken so long to transition to celluloid can be anyone’s guess or speculation.  This own reviewer’s suggestion is that the effects and implications of the four-year long event have dissuaded many a filmmaker from tackling the subject up until now.  How can one convey the horror and the resulting consequences in a two-hour cinematic narrative?  Is there an attendant danger that an individual storyline may fail to impart the human calamity in an appropriate manner?  Daly’s film never comes close to an epic sweep or a truly comprehensive picture, but his approach is to be lauded and ought to inspire other directors who may have contemplated this particular epoch in the past.  A well-rounded cast is led by Animal Kingdom’s Frecheville and the as-always reliable Weaving.  Irish actor Barry Keoghan meantime makes use of his pivotal moment in the film and fine support is also offered by the likes of Freddie Fox, Stephen Rea and Jim Broadbent.  In every sense, this feels like a film that everyone should see and the filmmakers ought to be commended for their brave efforts in bringing such a grave subject to the screen.  Both fitting and most definitely pertinent.