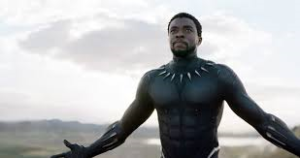 The eighteenth film in the Marvel Cinematic Universe is a thought-provoking and deeply-felt meditation on themes such as political isolationism and the weight of inheritance and personal responsibility.  Such profound matters permeating a Marvel film you ask yourself in slight disbelief.  The answer is a resounding yes.  Starring the excellent Chadwick Boseman and Michael B. Jordan, and directed by Ryan Coogler (Fruitvale Station and Creed), Black Panther is a superhero film with depth and heart which deftly balances the issues it seeks to address with some fine action sequences and stunning visuals.  The film opens on a poignant moment in Oakland, California as a young boy watches the fading light of a starship in the sky.  It’s a metaphor for broken promises and dashed dreams as we will subsequently learn.  The boy will grow up to be an embittered young man who believes he has a duty to deliver power and freedom to the oppressed such as himself.  He will stop at nothing to seize power in a far-off land named Wakanda which his father has told him has the most beautiful sunsets in the world.  In the present day – which we are swiftly transported to – the sun has set on the reign of King T’Chaka.  The events surrounding his violent death were presented to us in 2016’s Captain America: Civil War.  Introduced in that latter film also was his son T’Challa (Boseman) who returns to his homeland to assume the mantle of power.  T’Challa is an essentially good man who feels the shadow of his father’s regime and the heavy weight of his people’s expectations.  Masquerading as a third world country, Wakanda is, in truth, a technologically-advanced and highly-evolved nation.  For much too long, it has hidden from the rest of the world.  It has sought out no alliances and has not extended itself to better the cause of mankind as a whole. 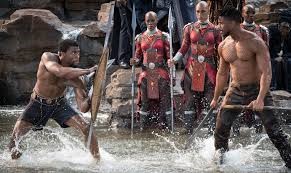 Having dealt with a pesky internecine challenge to his assumption of power, T’Challa is, of course, faced with a fundamental choice.  Does he persist with the safe inertia of his predecessors (his father included) or does he seek to effect change from within?  External forces in the guise of a black market arms dealer Ulysses Klaue (Andy Serkis clearly enjoying himself) soon force his hand.  In the best tradition of the MCU a stand-up battle takes place with all manner of CGI and embellished camera work.  But it’s a ruse of sorts and it works to the film’s general advantage.  Klaue is not the true villain of the piece – he’s a pawn on the chess board at best.  The real power player here is a character by the name of N’Jadaka or Killmonger as he’s better known (Jordan).  A blood cousin of T’Challa’s, Killmonger has his own specific agenda and it certainly does not ring of familial harmony and bliss.  Hardened by the passing of his own father and his years in service as a black-ops soldier, Killmonger wishes to open Wakanda up to the world with a literal bang – by empowering other revolutionaries around the globe with the weapons of its military might. 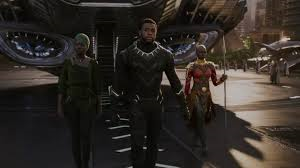 Charismatically played by Jordan, Killmonger has a point, but the means to this end are extreme and with sizable repercussions.  Yes, a nation should extend its own borders and seek to break down cultural differences Coogler and his co-writer Joe Robert Cole tell us.  But a break of this nature with the past should be promoted on a more gradual basis and through the proper channels.  The moral message here is clear – change is to be embraced, but it should be done responsibly.  A once insular nation should strive to become a universal player and work towards the betterment of the world; it shouldn’t confuse right with might, nor should it wantonly offer up instruments of violence and destruction in the name of such change and revolution.  The contemporary allusions are resonant here with respect to a nation which has not turned over the benefit of its own advancements and socially superior precepts to a world badly in need of such constituent elements.  A policy of isolationism has long protected Wakanda, but – as both T’Challa and Killmonger realise – the time for it to emerge from the shadows has arrived.  The fascinating plot point here is that both men imbued with royal blood and a like heritage have a similar world view; it’s just the way they seek to implement such a strategy that differs so markedly.  Killmonger may be the Satan of the piece, but, just like Milton’s famous creation, he has a strongly-defined character arc and a tragic quality about him. 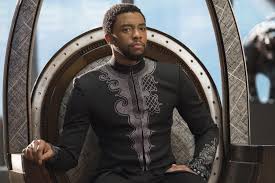 Much of the focus surrounding this very strong superhero film has centred on the specific universe in which Black Panther is set and its African-American central characters.  Credit has to be extended to Coogler and Cole in the first instance for a script which is both intelligent and purposeful shot through with a moral dimension the likes of which the MCU has not afforded us up until now.  The typically glaring visuals and ballectic choreography do not overwhelm in the hands of Mudbound cinematographer Rachel Morrison.  On helming duties, Coogler once again proves himself to be one of the most exciting young directors working in the business today.  The critical plaudits and huge box office figures enjoyed by Black Panther at time of posting this review mean that the sky is the limits for this filmmaker and his overall prospects tantalising.  The aforementioned Boseman and Jordan enjoy excellent support from the likes of Martin Freeman, Daniel Kaluuya and Forest Whitaker.  And then there is the plethora of strong female characters which is one of Black Panther’s best and most notable features – Lupita Nyong’o, Danai Gurira and Letitia Wright excel in their respective roles.  This is a film infused with gender empowerment and significance as much as it is of cultural import and weight.  Kudos to Coogler and the good people of the MCU who have allowed him to realise this striking vision.  Substantial stuff which sticks in the memory like that Wakanda sunset.