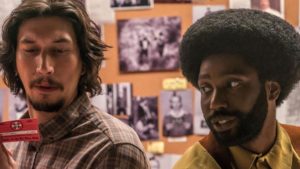 Based on the 2014 memoir Black Klansman by Ron Stallworth, the new cinematic offering from veteran film director Spike Lee is at once an affecting, amusing and, ultimately, probing examination of racial discrimination in America both in the past and the present day.  I mention the contemporary age here because in the final few frames of Klansman, Lee chooses to reference the 2017 Unite the Right Rally which took place in Charlottesville, Virginia.  The now 61-year-old director has never been reticent when it comes to hammering home his message.  On a personal level, I’ve found it difficult to warm to some of Lee’s films over the years.  But BlacKkKlansman succeeds because Lee and his fellow scriptwriters have invested it with a biting sense of humour and an undeniable warmth.  At its heart are characters that we the audience can root for.  This is especially the case with respect to the leading duo of John David Washington (son of Denzel no less) and the seemingly ubiquitous Adam Driver. 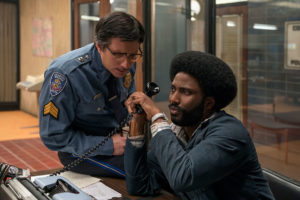 The era is the 1970s and, from an early point, we are reminded by Lee of where America is at with regard to race relations and general xenophobia.  Ron Stallworth (Washington) is an idealistic young recruit who has the unusual distinction of becoming the first black police officer in Colorado Springs.  Assigned to the dreariness and humdrum of the station’s records room, the young Stallworth positively itches to move up and onto better things.  A window of opportunity comes his way when he is ordered to infiltrate a local rally attended by national civil rights leader Kwame Ture.  A short time later, Stallworth displays some deft initiative when he contacts the local chapter of the Ku Klux Klan.  The resulting scene in which the central character disparages his own ethnic group is playfully written by Lee and his scripting collaborators, and acted to near perfection by the constantly engaging Washington.  The fluctuations in tone throughout the entirety of Klansman could have been jarring, but Lee and his writers have balanced the moments of humour and drama with consummate skill.  Cinematic references abound and we are reminded that this was the epoch of the blaxploitation genre in American film.  A famous tracking shot from 1939’s Gone with the Wind turns up at an early point.  D.W. Griffith’s The Birth of a Nation is an especial focus for Lee’s criticism – we are pointedly reminded of the influence popular culture can play.  There may have been no internet or social media way back in 1915, but cinema was most definitely in vogue and its attendant impact on the hearts and minds of viewers very much on the rise. 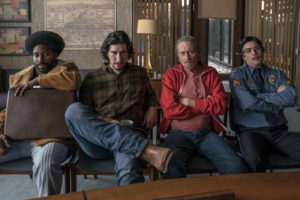 Invited to meet with the president of the local Klan chapter in Colorado Springs, Stallworth is forced (for obvious reasons) to seek out a white partner who can reasonably pass himself off as a burgeoning supremacist.  To this end, he manages to persuade Detective Flip Zimmerman (Driver) to present himself to Walter Breachway (Ryan Eggold) and his fellow Klan members.  On a thematic level, Zimmerman (a fictional concoction here as the true identity of Stallworth’s partner was never revealed) proves to be a telling choice on Lee’s part.  A Jew by birth, Zimmerman is non-practicing, but the design here is to gradually make him consider and appreciate his own background and heritage.  An aura of danger and physical threat is unmistakably added to the narrative thread as Zimmerman meets with Breachway and some of his more radical Klansmen in the guise of Felix Kendrickson (Jasper Paakkonen).  Elsewhere, a pervasive but cautious sense of mirth informs the scenes whereby the real Stallworth converses with none other than David Duke on the telephone. 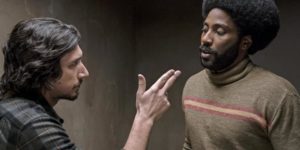 The culmination to all this comes by way of a superbly edited sequence involving Duke’s visit to Colorado Springs counterpointed with a civil rights rally in the nearby vicinity.  It matters little that the Klan’s bomb plot, as presented in this final third, is a fabrication employed for dramatic effect.  More telling and heartfelt here is the appearance of Harry Belafonte who appears as an elderly civil rights veteran imparting a horrific story from the same decade as Griffith’s The Birth of a Nation.  The filmmakers point is well made here and has a resonance no matter what the time period or circumstance.  Lee’s cause in this respect and other elements of the film is greatly assisted by a splendid cast.  Washington, for his part, is cut from the same cloth as his famous father – charming and resolute in equal measure.  Driver has never been better and the pair are well supported by the likes of Laura Harrier, Corey Hawkins, Eggold and Paakkonen.  Topher Grace is particularly well cast as the eloquent but eerie David Duke; Alec Baldwin makes a welcome cameo in the film’s opening moments playing a character by the name of Dr. Kennebrew Beauregard.  As I previously mentioned, Lee has never been an easy filmmaker for me to take to, but this is one of his most accessible and engaging films to date in my estimation.  A robust and lively piece with timely themes for this present and still troubled age of ours.