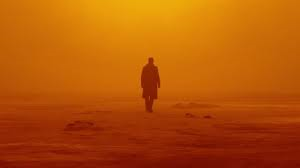 ‘Sometimes to love someone, you got to be a stranger,’ Harrison Ford’s Rick Deckard tells Ryan Gosling’s Agent K in Denis Villeneuve’s sequel to 1982’s science fiction classic Blade Runner.  For those of us who loved the original Ridley Scott-directed film (and still do), there was a pervading fear that any such sequel after a lengthy time period might merely attempt to mimic or even replicate (excuse the pun) the premise and visual style of its predecessor.  Blade Runner 2049 is far from being a perfect film, but, thankfully, it is a worthy sequel which expands on many of the themes of Blade Runner whilst also managing to eke out a place for itself as one of the best science fiction films in the last decade.  Stunningly shot by the great Roger Deakins (Academy members please give this man his overdue Oscar), Blade Runner 2049 is majestic to look at even if the future presented here by the cinematographer and Villeneuve is predominantly bleak and disconsolate in tone. 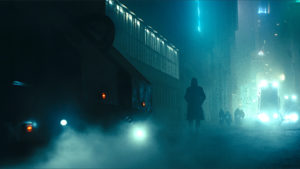 The elements of noir which permeated Scott’s 1982 film have been much discussed over the intervening 35 years since its theatrical release.  Here, after all, was a future vision of Los Angeles in the year 2019 which paid more than a little homage to the works of Chandler and Hammett.  There was teeming rain in abundant supply in the Los Angeles of that certain snapshot you will recall.  The photography of the late Jordan Cronenweth did not pull any punches with respect to the dystopian city we were immersed in.  Harrison Ford’s apartment was a gloomy abode befitting a latter-day gumshoe.  The transcendent-looking Sean Young, meantime, jarred with all the shadow and squalor around her.  There is still much precipitation in the Los Angeles of 2049; the west coast city has an interminable grime and pallid quality about it in spite of the dazzling and often bombastic advertising which is omnipresent.  The eco-activists and tree huggers have evidently not prevailed and humanity’s fate seems every bit as desperate as it was way back in 2019.  Amidst references to off-world colonies and idyllic holograms, we are introduced to Gosling’s K who is a more recently engineered replicant employed by the LAPD to hunt down and ‘retire’ older replicants who have purposefully wandered off the grid. 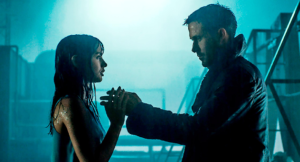 The retirement of one such rogue model (Dave Bautista), leads to the discovery of a buried box on a farm and the revelation that replicant biology has taken a quantum leap far beyond what K or his lieutenant superior (Robin Wright) could have imagined.  The possibility that these artificial beings might be capable of reproduction is as unsettling as it is morally problematic.  What implications for a human race that merely subsists in such a desolate world?  Is this the proverbial straw that might break the camel’s back?  Wright’s character certainly thinks so and she orders K to destroy all evidence of the birth and to retire the child of the replicant in the process.  Sinister forces in the form of Jared Leto’s Niander Wallace however identify the commercial opportunity and viability if such an occurrence can be broadened out into an enterprise.  The familiar names of Rachael and Deckard are referred to as K visits the headquarters of the business magnate who has, in the interim, taken over the Tyrell Corporation.  This is the ‘key to the future’ as he tells his replicant enforcer Luv (a suitably menacing Sylvia Hoeks).  Embedded with his own ‘human’ memories, K, for his part, has misgivings about retiring someone who has a soul. 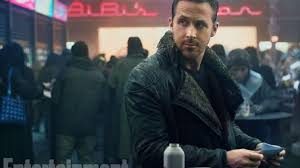 We have been over this ground before of course, but Blade Runner 2049 (I’m still not exactly sold on that title), widens its predecessor’s meditations with fine sensitivity and some pertinent thoughts of its own.  K lives in a functional apartment which is distinctly short on furniture and character.  The feeling of alienation, of lack of connectivity, is scarcely ameliorated by his virtual companion Joi (Ana de Armas).  Her expressions of love and affection are tempered by her inability to make physical contact; a kiss is an impossibility, an embrace reveals her for the mere projection that she is.  Both characters long for the uniquely human experience which is beyond the realms of possibility.  When gifted with more mobility around the apartment and its environs, Joi chooses to stand outside in the rain.  K, on the other hand, allows his mind to imagine a situation which is without substance or foundation.  Memories are a recurring subject much as they were when referred to in the original by Sean Young’s Rachael.  A toy horse becomes a visual motif in keeping with the origami fashioned by Edward James Olmos’s Gaff (the actor turns up in a brief cameo).  There are no unicorn sequences here, but the point of the story by Hampton Fancher is well made.  The implanting of fictional memories will not render the subject any more human in spite of the illusion and veneer.  In Blade Runner, Rachael suspected that she had been given the memories of Tyrell’s nieces – she could play the piano in spite of having no memory of lessons.  K, for his part, has memories of an orphanage and the aforementioned toy horse.  But when Joi attempts to give him a name (Joe), he dismisses this apparent kindness with some bitterness.  ‘I have memories, but I can’t tell if they’re real,’ he remarks.  In one of the film’s quieter moments, Wright’s lieutenant orders him to share one of these.  K does so, but only because he always obeys orders.  Addressing her as ma’am, he chooses to ignore a subtle pass made by his superior officer. 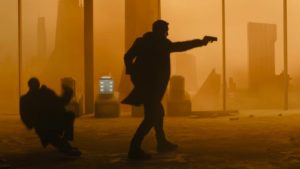 Gosling has never been the warmest or most endearing of actors, but it is this very quality which lends his monotone and mannered K such credibility.  He’s surrounded by some fine female support in the guise of Wright’s steely but essentially benevolent police officer, de Armas’s empathetic Joi and Sylvia Hoeks’s ever-forbidding Luv.  Jared Leto does not have a great deal to do as the self-serving Niander Wallace, but the Oscar-winner fares better as a baddie here than he did in last year’s Suicide Squad.  Swiss actress Carla Juri turns up in the role of Dr. Ana Stelline, a memory designer who is reputedly the best in the business in spite of her compromised immune system.

Which brings us to Harrison Ford’s place in all of this as he reprises a role he took on between Raiders of the Lost Ark and Return of the Jedi.  The veteran actor does not turn up until the latter half of the film (hope I’m not giving away too much there), but is suitably disheveled and world-weary.  Living only with a pet dog (which may be real or artificial) in the ruins of Las Vegas, Deckard has chosen a life of isolation surrounded by copious numbers of books and a lifetime supply of whiskey.  Ford channels the gravitas of one who realises he has lived an incomplete life to good effect and his drawn ripostes contrast nicely with Gosling’s uninflected timbre.  Was it worth the wait of 35 years?  Yes, just about. 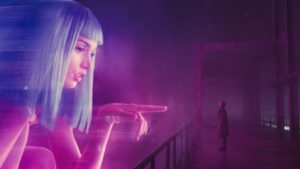 At a running time of some 163 minutes, Blade Runner 2049 is not a short film, but aficionados of the original should be well pleased with its thematic discourses, the look of the piece courtesy of Deakins and others, Villeneuve’s typically confident and distinctive direction and the performances of its central players.  For those less conversant with the Blade Runner universe, take heed of this word of caution.  The film is long and a prior viewing of the original is required in order to make sense of it all.  A first-timer is likely to get bored when many of the references and allusions simply have no meaning or relevance.  The film also suffers at times from a tendency to become overly ponderous with respect to its subject matter; there’s a little too much talk on occasion when one feels that Villeneuve ought to be propelling the plot forward with greater pace.  Nor could Blade Runner 2049 be termed an all-out action science fiction film by any stretch of the imagination.  The focus here is more often on the cerebral rather than the cliffhanging.  Do not expect a profusion of bangs or blasts.  Such shortcomings aside, fans of the original should be properly satisfied with the film’s ending which is seamlessly realised and emotionally complete.  The iconic score by Vangelis is not out of place here as it merges with that of Hans Zimmer and Benjamin Wallfisch’s efforts, bringing to mind, as it does, one of the most memorable scenes from the original film.  Are there tears in the rain still as we hear those familiar notes?  Yes, I think so.  A first-rate effort all round and a more than commendable sequel.