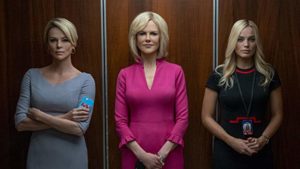 Focusing on the multiple instances of sexual harassment which occurred at Fox News under the stewardship of Roger Ailes, Bombshell is a both a worthy and topical film which engages with its subject matter in innovative ways without ever casting new light on the revelations which came to the fore during the summer of 2016.  23 known victims suffered humiliation and debasement at the hands of Ailes and the new film by Jay Roach (scripted by Oscar winner Charles Randolph) focuses on the real-life characters of Megyn Kelly and Gretchen Carlson and the composite figure of Kayla Pospisil.  There are shades of 2015’s The Big Short here – which Randolph co-wrote – with respect to the narrative devices employed.  From the get-go we have Kelly (as played by Oscar nominee Charlize Theron) breaching the fourth wall as she educates the audience on the inner workings of a busy news station and the specific dynamics which inform it.  Kelly is a consummate professional at the height of her game, whilst Carlson (played by Nicole Kidman) appears to be a television journalist on the slide.  Relegated to a less popular show and subsequently fired by Ailes, she decides to pursue a harassment suit against the latter hoping that evidence and testimony substantiating her own claims will be forthcoming from some of her former female colleagues. 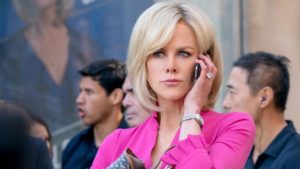 For the expedience of the film’s narrative, we are presented with the composite character of Kayla (Margot Robbie) – a beautiful, bright and energetic young woman who is eager to advance and keenly aware of the opportunities she can forge for herself.  Kayla is representative of the future in this three-tier structure; Kelly emblematic of the present order; Carlson of the older vanguard which is being pushed out the door much to her evident chagrin.  The most vulnerable of the three female characters is Kayla.  Ambitious and – perhaps – slightly naive, she attracts the eye of Ailes when she orchestrates a meeting with the elderly television executive.  The scene which ensues – whereby Ailes prevails on the young woman to lift her skirt – is certainly the most disquieting moment of the film.  Through Robbie’s fine performance, the unbearableness of the sequence is more than palpable.  The lewd behaviour on display would soon be exposed, but the filmmakers also give us a sense of the power which was wielded by men such as Ailes and the feeling of entitlement which was utterly disproportionate.  Shortly thereafter, when attempting to confide with her friend and co-worker Jess (Kate McKinnon), Kayla is bluntly told that – as an employee of the station – the former cannot get involved. 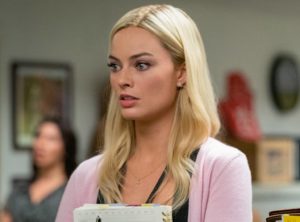 Carlson’s harassment suit was eventually bolstered when Kelly and others came forward with similar stories involving Ailes and his various acts of inappropriate behaviour.  Set during the height of the presidential campaign in Summer 2016 – and a full year before sexual abuse allegations made against Harvey Weinstein came into the spotlight – Bombshell certainly benefits from the potency of its subject matter, but one can’t help but feel that – at times – it is merely chronicling events as they unfolded as opposed to registering the emotional impact which must have been felt by the affected characters.  Without seeking to diminish the importance and relevance of the story being told here, the film does feel oddly clinical as it moves through its various gears and builds to a denouement which is inevitable given the history of the sordid affair.  In the background, the filmmakers call our attention to the Trump campaign which, itself, is the subject of contention and more than a little insinuation.  This is a vision of America which is far from pretty and Roach and Randolph, to their credit, do not pull any punches with respect to its depiction. 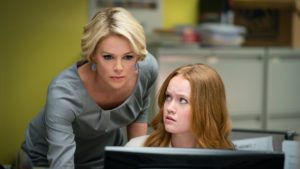 The film’s greatest strength resides in the veracity and zeal of its performances.  As Megyn Kelly, an almost unrecognizable Charlize Theron excels as one of the network’s most popular newscasters – a talented and articulate woman who, in spite of herself, cannot inevitably look past the harassment which has been dished out to her in the past by Ailes.  Nicole Kidman – in an unshowy role – is well cast as Carlson and the aforementioned Robbie brings heart and human dimension to the concocted character that is Kayla.  Rounding out an excellent cast are stellar players such as John Lithgow (Roger Ailes), Mark Moses (Bill Shine), Kate McKinnon (Jess Carr), Malcolm McDowell (Rupert Murdoch) and Allison Janney (Susan Estrich).  All in all, a pertinent picture amplified by some fine central performances.  But deeply felt – this reviewer felt more educated than moved.