Movie Review: Can You Ever Forgive Me? 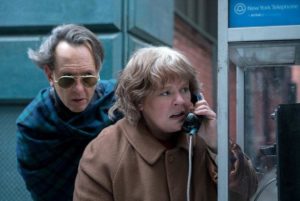 At the beginning of Can You Ever Forgive Me?, director Marielle Heller’s splendidly astute biographical film, author Lee Israel (Melissa McCarthy) is in a pretty dark place which will be familiar to many a famous writer who has experienced the downward curve.  A one-time successful biographer of the likes of Tallulah Bankhead and Estee Lauder, the fifty-something writer is no longer able to attain gainful literary employment.  Her personal circumstances are starting to militate against her as well.  She can barely manage to finance her perpetual drinking habit; her cat is sick and the landlord is chasing her for the arrears of rent that she owes for an apartment that is currently infested by flies.  Lee, in truth, is her own worst enemy.  Socially awkward and prone to bouts of outspokenness, she is almost impossible to promote as her long-suffering agent Marjorie (Jane Curtin) observes at an early juncture.  A party scene reveals her innate dislike of her peers and those who have enjoyed greater commercial success than herself.  An advance for a new biography she has planned regarding Fanny Brice is simply out of the question given the meagre profits her previous works have turned.  Unwilling to play the game, Lee spends a good deal of her time in seemingly downbeat bars and doting upon the only creature in her life which she genuinely cares about – her twelve-year-old cat Jersey. 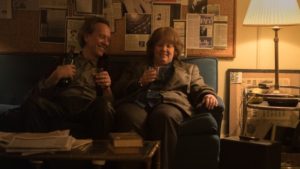 A chance meeting in a bar with the flamboyant and gregarious Jack Hock (Richard E. Grant) offers a chance of friendship and a modicum of fellow affinity.  Like Lee, Jack is somewhat out of step with the world he moves through.  Upon seeing him for the first time again, the alcoholic writer recalls how he once urinated in a closet at a party she was attending.  Charming and self-confident, Jack readily acknowledges that he has spent the greater part of his life moving from one ruse to the next.  He sells coke which is laced with a laxative and flirts unashamedly with a diner waiter.  An unusual bond forms between the two because they are essentially outsiders who realise that mainstream society is not their cup of tea.  But, unlike Jack, Lee is less sure of how she can raise funds to pay her bills and purchase the medication which her ailing cat needs so badly.  A certain twist of fate points her the way.  Unearthing a personal letter she once received from actress Katharine Hepburn, the financially-struggling writer sells it to a local book dealer.  Happening upon a letter by the aforementioned Brice some time later, Lee quickly realises an opportunity which draws upon her skills and aptitude as a writer.  Forging letters by deceased writers, playwrights and actors, the author taps into a world of high-brow collectors who revel in such artifice and cultural history.  Her new-found calling means that she doesn’t have to ‘shovel shit’ as she explains to a slightly bemused Hock.  Penning missives by the likes of Noel Coward and Dorothy Parker confers on Lee a new sense of self-importance and pride in her work.  She admonishes Hock when he assumes that her scheme is merely a case of copying signatures.  But her best-laid plan soon comes a cropper when she writes a letter in the guise of Coward which is – uncharacteristically – open about his own sexual orientation.  Suspicions about the authenticity of her letters soon come to the fore and Israel is blacklisted by her buyers and subsequently investigated by the FBI. 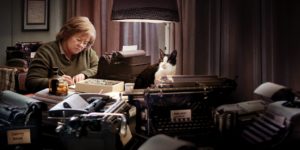 A film which starts out with some biting wit and sardonic reflection evolves into a deeply affecting and – ultimately – poignant study of the human condition.  The central characters are not warm people, but the overall effect is to elicit our sympathy for them.  Forever in conflict with the social world around her, Lee has managed to alienate herself from her few friends and professional associates.  When she meets with her former lover Elaine (Anna Deavere Smith), the former remarks on how little she really knew about Lee despite their physical intimacy.  A dinner date with an obviously smitten bookstore owner named Anna (Dolly Wells) is another occasion for Lee’s social ineptitude.  Receiving a short story from the aspiring writer, the author promises to read it sometime in the future.  Her vagueness on this very point is distancing of course and the date ends uncomfortably as she walks away into the New York night.  An actress whose career has centred on overtly comic roles in recent years, McCarthy has never been better as the complicated Israel – a talented woman who is deeply frustrated by the impasse her career has arrived at.  McCarthy’s performance does not pull any punches and the superb script by Nicole Holofcener and Jeff Whitty never sugar-coats the truth concerning Israel’s propensity for acerbic commentary and her fondness for the hard stuff.  Complimenting this wonderful performance is Grant who invests the character of Hock with an underlying humanity in spite of his roguish demeanour.  The final scene played between the two – some time after the central drama of the piece – is quite simply magnificent and almost tear-inducing.  It says much about a film – which is about a deliberate con – that audiences will leave the cinema feeling a glow of warmth for these two personalities.  In her second feature film behind the camera, Marielle Heller shows how adept she is handling the tricky subject matter and with her leading actors.  One of the very best films of the year to date which should make many a top ten list by the time 2019 draws to a close.