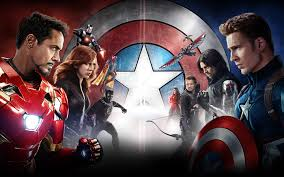 Hmmm – haven’t we seen this somewhere recently?  Superheroes fighting superheroes.  It didn’t have a very happy ending for us the viewer the last time, but, thankfully, Marvel’s latest instalment delivers on both fronts of high-octane action backed up by some credible storytelling.  Following the quite good, but a tad overblown, Avengers: Age of Ultron, Captain America’s latest outing delivers a much tighter premise and it’s all the better for that.  Mercifully, there are no massive rocks hurtling towards earth this time around.

OK, let’s be perfectly honest about it – this is an Avengers film to all intents and purposes, albeit shorn of two of its primary characters.  Dr. Banner aka the Hulk is presumably hiding out in some Trappist monastery; whilst Chris Hemsworth (Thor) seems to be popping up in every other major release at the moment.  So devoid of those two, we pretty much have the rest of the gang assembled for this one. 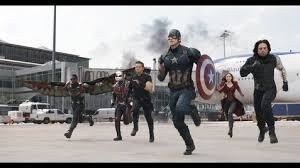 The central theme of Civil War is, as the title suggests, one of a schism and it cuts to the very heart of the Avengers and what they stand for.  Following an international incident in the field of action, the powers-that-be decide that these ‘enhanced’ agents have to be brought to account for their actions.  Incumbent US Secretary of State Thaddeus Ross (William Hurt) presents our heroes with the Sokovia Accords which has been signed by numerous countries around the globe.  This stipulates that the Avengers should henceforth be answerable to the UN and tasked only for action when that same body deems it necessary.  Conflicting views on this ensue of course and are at their most heightened between Steve Rogers and Tony Stark.  Cap is against it, Iron Man (post his Ultron mess-up) is for it.  Matters become even more problematic following an attack on the conference convened in Vienna to ratify the aforementioned Accords.  Throw into the mix Cap’s old buddy Bucky Barnes aka the Winter Soldier (who is fingered for the atrocity) and you’ve got yourself a superhero standoff that Dawn of Justice merely aspired to, and with a lot less heart. 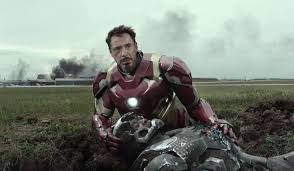 One of the great pleasures of the so-called extended Marvel Universe is its introduction of new characters and long-standing ones and the charming interactions which ensues between them.  Captain America scores highly in this latter regard.  And so we have a new Spiderman by way of a very funny scene involving Downey Jr., Marisa Tomei as May Parker and Tom Holland as Peter Parker.  Holland acquits himself well in the role; his Spiderman is incessant chatter as other previous incarnations have been, but there’s also a deft off-beat charm, particularly in his scenes with Tony Stark.  Also, turning up in a nicely-pitched extended cameo is Paul Rudd’s Scott Lang aka Ant-Man.  Like Holland he adds some great humour and is also awarded the film’s biggest scene (watch the movie and you’ll see what I mean).  Returning regulars include Don Cheadle as War Machine, Scarlett Johansson as Black Widow, Anthony Mackie as Falcon and Jeremy Renner as Hawkeye.  Recent arrivals Wanda Maximoff and Vision have some useful exposition as well and Daniel Bruhl is capable as the chief orchestrator of the Avengers bust-up.  As for the lead roles themselves, Chris Evans is more than solid as ever in the Cap suit, and out of it; and Downey Jr. (with fewer quips than usual) is his charismatic best self.  All in all then Civil War succeeds in its dual task of telling a self-contained story which also drives forward the Avengers overarching one to great effect.  It remains of course to be seen where the series will go from here.  Civil War by all accounts is the last in the current series of Captain America movies and we won’t see this character again until Infinity War Part 1 which is scheduled to be released in May 2018 (with Part 2 scheduled for May 2019).  Chris Evan will be returning for these, as will Robert Downey Jr.  Perhaps they will have patched up their differences by then.  Perhaps the lingering animosity will serve as a starting point for the back-to-back movies.  Only time and the Marvel Universe will tell.