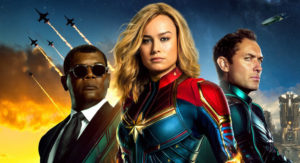 Marvel Studios’ first female-led superhero film ticks many boxes with respect to its storytelling, character insight, action-packed sequences and special effects which manage to impress but never dizzy.  Set largely in the year 1995, the film – directed by Anna Boden and Ryan Fleck (Half Nelson, Sugar) – serves not just as an origin story, but a prequel to some notable elements of the Marvel Cinematic Universe.  Beginning on the alien planet of Hala, the story focuses on a character named Vers (Brie Larson) who is the member of an operative team named Starforce.  Vers is a plucky and highly-motivated soldier, but some doubts linger regarding her ability and her backstory.  A tentative association with another world (which more than resembles Planet Earth) is suggested by recurring nightmares and ‘flashes’ as they are called by Vers.  Her mentor and the commander of Starforce, Von-Rogg (Jude Law) reminds her of the need to keep her emotions in check whilst in the heat of battle.  A mission soon ensues which involves the rescuing of a fellow operative who has been attempting to infiltrate a race of extraterrestrial alien shapeshifters called Skrulls.  More than a few hitches later and Vers finds herself captured by the rather unpleasant-looking bunch and subject to a mind probe aboard their Earth-bound vessel.  It should come as no great surprise that Vers’s subsequent escape sends her careering towards the world of the 1990s where Blockbuster Video stores are still in vogue commercially and the nascent internet is interminably slow.  The story begins proper as Vers realises that the urban environs of Los Angeles are a dead ringer for her dreams.  Her accidental landing on Earth also brings her into contact with one Nick Fury (Samuel L. Jackson magically de-aged and fully biocular in this past existence). 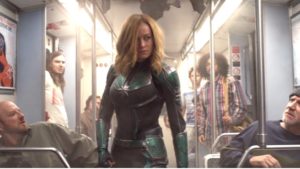 Superhero films – such as Marvel’s very own Thor (2011) and DCU’s Wonder Woman (2017) – have played on the fish-out-of-water theme to good effect before and Captain Marvel makes good use of its retro-setting and the way in which its central character reacts to this.  The key difference here however is that Vers does have a past in this world which is pertinent to the central action of the film – her real name is Carol Danvers, a former U.S. air force pilot who has been missing in action for six years and presumed dead.  Several memory jogs later and Danvers finds that her role in an intergalactic conflict is more than just a peripheral thing.  On the way to such realisation there are rekindled personal ties and a re-awakened identity.  The filmmakers have cast the part of Danvers very astutely because the Oscar-winning Larson is an innately-gifted actress with a naturalism that is second-to-none.  She is well supported by a cast which also includes the aforementioned Jude Law, Clark Gregg, Djimon Hounsou, Lashana Lynch and Annette Bening (as the aptly-named Supreme Intelligence).  The always-excellent Ben Mendelsohn is on top form as Talos (the leader of the Skrulls) who gets some of the film’s best lines.  At age 70 (at the time of this review), the de-aged Samuel L. Jackson receives his most comprehensive role as S.H.I.E.L.D.’s future director Nick Fury to date.  There is a wonderful and scene-stealing marmalade cat by the name of Goose who has some very interesting defence mechanisms.  The late great Stan Lee gets to make one of his last ever cameo appearances.  And what’s not to like as the titular Captain Marvel gets to kick some alien ass to the strains of No Doubt’s Just a Girl? 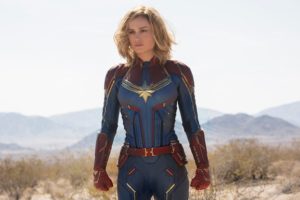 The 21st film in the MCU to date will not disappoint fans and will appeal to those of us who admired 2017’s Wonder Woman.  Directors Boden and Fleck (who are also on co-scripting duties with Geneva Robertson-Dworet) imbue the central character with some real heart, gusto and a palpable thread of emotion.  In one key scene, Danvers quite rightly laments the fact that her six-year absence from Earth has deprived her of family and friends – real human interaction in effect.  Her ascendancy to superhero status is chronicled by a raft of visual effects, but the filmmakers also have the good sense to anchor the story in a very human and personal context.  A sidebar story concerning a group of alien refugees who are seeking nothing more than a new home also plays well with regard to a theme of inclusion which the film wears quite proudly on its sleeve.  Thankfully, the overall proceedings are never allowed to become too heavy and Captain Marvel has a welcome vein of humour throughout.  The playful barbing between Larson and Jackson works well and Mendelsohn – given sufficient latitude here – also gets in on the act.  As superhero movies go, Captain Marvel is a more-than-satisfying entry in the MCU canon and – of course – this being the franchise that it is, we can fully expect to see the character quite soon again.  On the whole, an entertaining and thoughtful origin story which continues the studio’s consistently high standard of quality product and first-class casting.  To slightly butcher a well-known phrase, the female Cap done good.