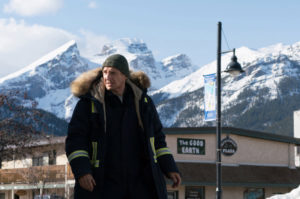 ‘Some cause happiness wherever they go; others whenever they go.’  So begins the American remake of the 2014 Norwegian vigilante film In Order of Disappearance which – incidentally – is directed by the original’s same helmsman Hans Petter Moland.  The setting has been changed from the fictional town of Tyos, Norway to that of Kehoe, Colorado and Liam Neeson is cast in the central role previously occupied by Stellan Skarsgard.  Nels Coxman is the type of character one would readily associate with Neeson such is the extent of the actor’s involvement in the Taken-type template film in these more recent years of his career.  A softly-spoken man of few words, Nels is first introduced on the very same evening that he is to accept an award for citizen of the year in Kehoe.  His wife Grace (the briefly-involved Laura Dern) reminds him that he will have to come up with a few more words than is usually his norm.  ‘Lincoln managed 272 for the Gettysburg Address’ she gently jokes and the exposition of character is effectively communicated.  A snowplow driver who keeps the adjoining roads clear for the economic benefit of the ski resort, Nels is unassuming personified.  He quietly goes about his business and imagines that all others will do the same as well. 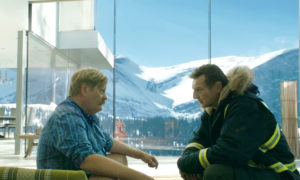 Nels’s life changes in a most dramatic and drastic way following the sudden death of his only son Kyle (Micheal Richardson – Neeson’s real-life son).  The disinterested staff at the hospital’s morgue conclude that it is a heroin overdose like so many others they have seen before.  Nels is adamant that Kyle is not a ‘druggie.’  The audience know that he is correct in his surmising, but his grief-stricken wife berates him for his lack of mourning and understanding of his son’s personal life.  ‘What did you use to talk about when the two of you went hunting?’ she enquires in a suitably despondent tone.  ‘Hunting’ Nels replies without missing a beat.  It’s not long before Grace has exited the narrative leaving Nels to the task-in-hand of killing his way up the food-chain to the drug lord ultimately responsible for Kyle’s death.  Crafting a custom sniper rifle with no small dexterity (and in a similar vein as one Travis Bickle), the sexagenarian soon discovers a vindictive streak he never realised he had.  Within a very short time-span, three members of the drug cartel in nearby Denver are dispatched with clinical efficiency.  Nels disposes of the bodies by wrapping them in chicken wire and throwing them into the falls of the Colorado River.  When asked how he knows of this method, he simply replies that he has read it in a crime novel.  The tone of the piece becomes more tongue-in-cheek as the narrative expands to include a turf war between the cartel and a Native American drug lord by the name of White Bull (Tom Jackson).  There are playful allusions to other film genres here on Moland’s part, most especially, and pertinently, the western.  A fine supporting cast includes The Wire’s John Doman, Domenick Lombardozzi, William Forsythe, Emmy Rossum (as a plucky local law enforcer) and Tom Bateman as Viking – the kingpin in the aforementioned Denver drug cartel. 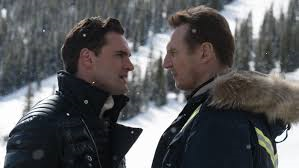 The black humour, which becomes increasingly palpable in the second half of the film, continues to the very final frame and serves to set it apart from the conventional vigilante flick.  A nice sidebar occurs when Nels ‘kidnaps’ Viking’s only son – a young boy who is much more agreeable and well-mannered than his father – and takes him home to his log cabin in the snowy setting of the Rockies.  ‘Have you heard about Stockholm Syndrome?’ the youngster enquires as the two of them bond in a strangely cute way.  All the while, the body count mounts and the snowy surface of the mountains is spattered in many different kinds of crimson hue.  The denouement which takes place at the snowplow garage is in keeping with the tenor of what has gone before and several comeuppances come to pass as invariably expected.  Thankfully, Moland’s direction and the screenplay by Frank Baldwin keep proceedings moving at a suitable pace.  In the principal part of Nels, Liam Neeson is well cast and the filmmakers tinker to good effect with the mantle of tough guy which he has taken on these past few years.  The actor, who is now in his mid-sixties, is tailor-made for this type of role and his deadpan delivery serves the overall tone to near-perfect effect.  The controversy which ensued following the comments he made at a press junket to promote Cold Pursuit meant that the film was talked about for other reasons aside from its several merits, particularly its rich vein of dark humour.  A masterpiece of the genre it may not be, but, along with last year’s Widows and his voiceover role in 2016’s A Monster Calls, this is most definitely one of Liam Neeson’s best efforts of recent times.