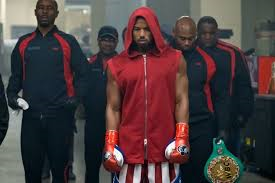 The sequel to 2015’s Creed, and eighth installment in the Rocky series (yes, it’s been that many since 1976), adheres closely to a well-worn formula which, ultimately, works well and packs a very solid punch in its own regard.  The opening frames of Steven Caple Jr’s film tellingly concern a figure from Rocky’s past – Ivan Drago (Dolph Lundgren) watches on as his son Viktor (Florian Munteanu) records his latest knockout win in the ring.  33 years previously, the older Drago lost an unsanctioned bout to Rocky on his home turf after he had killed Apollo Creed in Las Vegas.  Still shamed by this defeat, the former Soviet boxer has apparently conditioned his son to restore his sense of pride.  To this very end, Ivan views Adonis Creed’s spectacular ascension to the WBC World Heavyweight Championship as his moment of opportunity.  Challenging the newly-crowned champion, the Drago camp is not afraid to highlight what happened when Adonis’s father took on the behemoth that was Ivan.  Fans of the series will not be in the least bit surprised by what ensues.  Concerns for Adonis’s well-being abound and are primarily articulated by Rocky himself.  The former champion still keenly feels remorse for his part in the exhibition fight which went so horribly wrong.  And there are personal factors which Adonis must also contend with vis-a-vis his relationship with his fiancee Bianca (the excellent Tessa Thompson) who is expecting their first child.

There are plenty of tropes and not just a slight smattering of cliches in all of this, but Creed 2 largely succeeds, as its predecessor did, owing to the warm characterisations on offer here and the peerless acting by its main players.  1985’s Rocky IV was one of the weaker entries in the series and I personally had my doubts regarding the decision to re-introduce Drago’s character.  Let’s cast our minds back briefly to that earlier film.  The Stallone-directed fourth entry was theatrically released just a few months after Rambo: First Blood Part II.  It was not exactly subtle with respect to its patriotic-infused story and its one-dimensional representation of the Soviet system and athletes.  We saw images of the hulking Drago being plied with steroids as Rocky climbed mountains somewhere in the Russian wilderness.  In contrast to this, Creed 2 happily infers much sympathy for the former villain of the piece.  Living in a beehive apartment now and stripped of his former glories, Drago is eager for his son to win the prized belt which eluded him.  He regards his defeat at the hands of Rocky as the beginning of his own personal misfortunes.  A nicely-played cameo by Brigitte Nielsen (reprising her role as Ludmila Drago) gives heightened effect to this.  A well-rounded cast meantime is populated by the likes of Wood Harris and the returning Phylicia Rashad who, again, plays Adonis’s stepmother Mary Anne.  Stallone and his co-scriptwriter Juel Taylor sensibly focus on recurring themes such as family and the desire for self-actualisation and personal glory.  The monumental choices which the characters must make are palpably felt and the writers never allow this to descend into the maudlin.  As I previously suggested, it’s a well-worn formula, but it’s certainly not tired just yet. 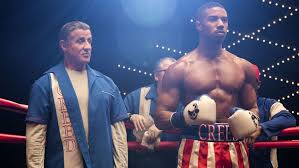 What works so well for Creed 2 – as with its predecessor – is the quality of the performances here and the general warmth engendered in the quieter and more private moments.  Michael B. Jordan continues to impress as an adult actor and his Adonis Creed registers the weight of personal responsibility and public adulation.  Having reached the very peak of his profession, the young champion genuinely frets about the sizable mantle he has taken on.  This was a theme which was explored in Creed, but there is greater urgency felt now as he begins a family of his own.  How does a man step out of the shadow of a father he never knew?  Can he reconcile his private space and his public image?  The 72-year-old Stallone has seldom been better and fits the role of the elder mentor like the proverbial glove.  The excesses and shortcomings of Rocky III, IV and V were addressed by way of 2006’s Rocky Balboa and the new Creed films have proven to be an unexpected delight.  It’s a testament to Stallone’s undervalued talents as a writer that he can eke out so much fine storytelling from a template that is as telegraphed as a measured right hook.  The old chestnuts of the training camp and the climactic fight itself are secondary in importance here and Stallone and Caple Jr. are not shy about acknowledging this.  In separate sequences, both Rocky and Adonis address the headstones of their departed family members.  Rocky makes peace with his own estranged son.  Even Viktor and Ivan – we sense – may forge a more balanced relationship.  There’s nothing novel on offer in Creed 2, but heart and guts win the day as they always do in a Rocky movie.  We would not bemoan another big screen appearance by the younger champion.  As for the older man, his place in cinema history is long-since assured.