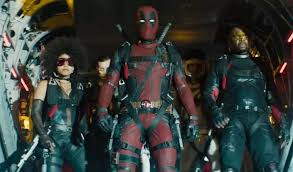 Fans of 2016’s Deadpool will not be disappointed by this summer sequel which sees the wisecracking, but essentially endearing Ryan Reynolds reprise his role as the titular Deadpool/Wade Wilson.  It’s two years since the events of the first film and Deadpool has developed a sustainable career for himself in the guise of a mercenary who plies his trade on a global basis taking out various baddies and overlords.  The violence and graphic bloodletting is in keeping with the tone of the first film and, on occasion, even exceeds it in terms of the detail and design.  Slow motion and a host of different camera angles are the order of the day as the central character goes about his seeming mission of making the world a better place.  Cue one personal tragedy later however and we witness a somewhat bizarre scene in which he attempts to immolate himself.  Hardly standard fare for a superhero film you will say.  But this is Deadpool remember.  Self-referential jokes and the near emasculation of the principal player are stock elements of this particular cinematic universe. 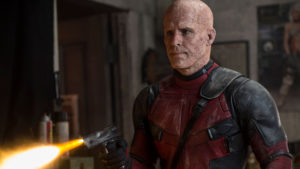 Ok, here’s the thing – I liked 2016’s Deadpool without totally loving it or singing its praises in the manner some fans did.  The original – which was directed by Tim Miller – worked well generally thanks to its utter refusal to take itself seriously and mostly thanks to the efforts of its leading man, the aforementioned Ryan Reynolds.  Reynolds, who had originally played the character in 2009’s X-Men Origins: Wolverine, was a perfect fit for the role and he duly displayed his innate talents for comedy and self-lampooning.  At times I found the one-liners and the breaking of the fourth wall a little too frequent and such is the case here again with Deadpool 2.  The visual gags and the verbal quips come thick and fast and the in-jokes range from references to Disney’s Frozen and Barbra Streisand’s Yentl.  At one point when he is referred to as a ‘clown dressed up like a sex toy’, the response from Reynolds’s Deadpool is on the money – ‘So dark!’ he replies, ‘You sure you’re not from the DC Universe?’  If you didn’t enjoy such constant witticisms in the first film, then Deadpool 2 is clearly not the film you should be going to see this summer.  On an interesting side note in this regard, Reynolds and the previous director Miller apparently fell out due to creative differences with respect to the tone and tenor of this sequel.  Word has it that Miller wanted to take the follow-up film in a more stylistic direction, whilst Reynolds wished to retain the frequently bawdy humour.  Well, I don’t think I need to tell you who won that particular round. 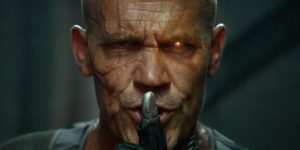 The essential plot of Deadpool 2 involves the jesting hero being recruited into the X-Men fold by the well-intentioned Colossus (Stefan Kapicic).  Although not naturally inclined as a do-gooder, Wilson accepts this calling and attempts to help with a troubled teenager named Russell Collins, aka Firefist.  The mission of mercy, which takes place on the grounds of an orphanage, does not go quite according to plan, as one can imagine, and it results in Deadpool being restrained with a collar which has the effect of entirely negating his mutant powers.  Matters become all the more complicated when a mysterious time-travelling cybernetic mutant soldier by the name of Cable (Josh Brolin) arrives on the scene.  Driven by the singular desire to kill Russell, Cable has motivation aplenty on his side given that the teenager caused the deaths of his family.  When Deadpool prevents him from doing so at the prison, he subsequently determines to form a team of mutants called X-Force to further frustrate Cable’s desire to end the troubled teenager’s life. 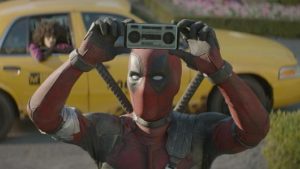 I’m not going to give away any more plot points, but suffice it to say that there is action and special effects galore, particularly one sequence involving a prison truck which is somewhat reminiscent of 2008’s The Dark Knight.  Reynolds is once again in top form as Wilson/Deadpool, but this time around it’s a more rounded performance in my estimation with the character’s vulnerability being emphasised a good deal more.  In support, Josh Brolin is excellent as Cable and his character thankfully takes on a more three-dimensional feel as the plot and his own backstory are fleshed out.  With this film and Avengers: Infinity War, Brolin would seem to have taken on the mantle as the go-to actor for such roles.  For my money, he’s even better here as he emotes a world-weariness as well as playing the relatively straight man who, at heart, is searching for an inner peace.  Deadpool 2 won’t be to everyone’s taste and my own personal reservation – as per the original film – is that the humour seems rather forced at times and could perhaps be more measured and subtle.  That having been said, this is as good a sequel as one could have hoped for and kudos to Reynolds the star, his co-writers Paul Wernick and Rhett Reese, and director David Leitch (John Wick, Atomic Blonde) in that regard.  Expect a sequel in due course, particularly if this one turns a profit like its successful predecessor.