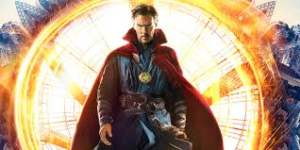 Marvel’s latest entry in its cinematic universe is an entertaining tale combining the source material of its 1963 comic book creation with a new world sensibility and Eastern mysticism to boot.  Benedict Cumberbatch (finding time in his ever-busy schedule) is the titular character – Dr. Stephen Strange, a gifted neurosurgeon whose career is brought to a seemingly abrupt end following a dramatic car crash (the good doctor really should know better than to be gazing at his phone whilst negotiating those pesky bends).  Strange is distraught at the prospect of a life devoid of his healing powers (his hands and nerve endings are smashed up pretty badly) and, following an encounter with a paraplegic named Pangborn (a fleeting Benjamin Bratt), the doctor decides to travel to the secret compound of Kamar-Taj in Kathmandu seeking out a character simply known as the Ancient One.  There he finds a bald Tilda Swinton (the aforementioned Ancient One) and a rather sullen Chiwetel Ejiofor (Karl Mordo – a devoted student of the Celtic mystic).  Strange begs to be taught in the ways of matters such as the astral plane and other such mind-bending dimensions (full credit to the visual and special effects people here) and, reluctantly, the Ancient One agrees to take him on as her latest protege. 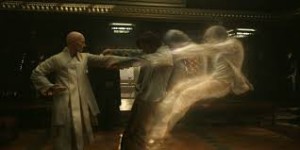 Strange is frustrated by his lack of progress at first, but the good doctor’s tutelage shows keen promise as he begins to read avidly from the ancient books in the compound’s library protected by its custodian Wong (a scene-stealing Benedict Wong).  But it’s not all idyllic learning and quite soon Strange learns of Kaecilius (Mads Mikkelsen fast becoming the go-to villain of choice) and his acolytes who are intent on harnessing the powers from a ritual stolen from the library in order to create a dimension where time has no dominion and all can live forever-more.  Strange’s first encounter with Kaecilius in the New York Sanctum (one of three edifices created to protect the world from evil powers) is a wonderful sequence which introduces his character and the viewer to the Cloak of Levitation. 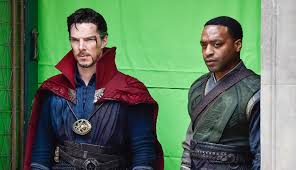 Hard to keep up with this intricate plot you say?  Well don’t despair – there are diverting moments aplenty in Doctor Strange apart from the high mysticism and sometimes eye-popping special effects.  Cumberbatch is well cast as the central character and he channels a committed focus combined with an astute sense of comic timing when called for.  Rachel McAdams pops up intermittently as the love interest of sorts, Christine Palmer, and another one of the film’s well realised sequences has her battling to save Strange’s life on the ER table as his astral self goes head to head with one of Kaecilius’s henchmen.  Elsewhere we have Michael Stuhlbarg rather wasted as a surgeon colleague of Strange and Palmer’s.  The great Stan Lee provides his now-traditional cameo appearance. 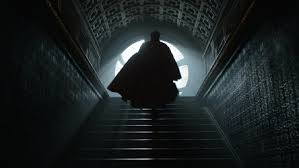 Doctor Strange as an origin story and, lest we forget, another layer in the ever-evolving Marvel Comics Universe, ticks all the right boxes in so many ways and should do great box office in the process.  It’s got a great central character, heaps of special effects (reminiscent of The Matrix and Inception) which,thankfully, do not completely overwhelm, and production values befitting a superhero film of this kind.  The climatic showdown between Strange and the Dormammu (that’s the entity Kaecilius wishes to summon to Earth by the way) is perhaps a little too easily resolved in my judgement, but, hey, this is an origin story after all and no doubt we will hear more of that character as long as the MCU sustains itself.  On directing duties Scott Derrickson (The Exorcism of Emily Rose and The Day the Earth Stood Still remake) does not let the side down and he has collaborated on a screenplay here with co-writer C. Robert Cargill that is smart without ever getting too punchy or pun-laden.  And that Cloak of Levitation is ultra-cool by the way – watch especially for the moment when it rather tenderly wipes Strange’s face.  Benedict certainly looks the part in it.  Expect to see him in it again as The Avengers reappear and a Strange sequel looms in the not-too distant future.  Welcome Doctor Strange to the MCU.