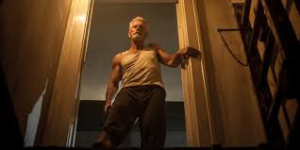 Fede Alvarez’s sleeper hit Don’t Breathe has been described in some quarters as a horror film, but don’t be put off or mislead by this piece of pigeonholing.  An 88-minute white-knuckle thriller that is often sparse on dialogue, but certainly not on suspense, Don’t Breathe is the sort of minimalist entertainment that John Carpenter so effectively turned out during the heyday of his career.  The premise, as you might imagine, is quite simple.  Three Detroit misfits – Rocky (Jane Levy), Alex (Dylan Minnette) and Money (Daniel Zovatto) – eke out an existence for themselves breaking into homes and selling on the valuables they steal in the process.  They have useful insider information in the form of Alex’s Dad who runs a security company providing the very systems that they are able to disable.  All three have aspirations for a better way of life; Rocky, in particular, wishes to liberate herself and her younger sister from a neglectful mother.  When Money learns of an army veteran who received a large payout from a wealthy family following the death of his daughter, an opportunity arises that seems hard to pass over.  Given also that the vet is blind and resides in an abandoned neighbourhood, the three associates are lured into the notion that this surely will be an easy score which will provide them with the wherewithal to depart the Motor City. 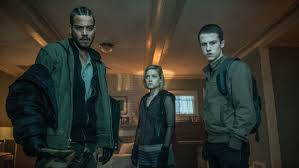 Things do not quite go according to plan as you might imagine, and the would-be burglars find themselves trapped in the darkened house and facing a resilient ex-military man who does not appreciate their designs.  Stephen Lang (best known perhaps for his part as Quaritch in James Cameron’s Avatar) is not given much in the way of dialogue, but he more than makes up for this in terms of his sheer physical presence.  The Blind Man, as we discover, has his own particular secret which the burglars stumble upon as they attempt to flee the house with the cash he was given following the tragic death of his daughter. 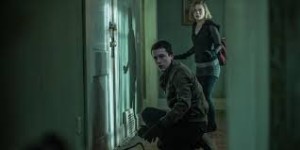 Don’t Breathe makes great use of its confined space to deliver a taut and tense story in which the hunters effectively become the prey as the former vet calls upon his training and acute knowledge of his environs.  The characters aren’t especially well fleshed-out – with the exception of Rocky’s backstory perhaps – but who needs such exposition in a film that is an elaborate set-piece replete with shocks, thrills and some truly bone-crunching moments.  And it’s not a horror film as I’ve stated above.  This particular categorisation is a very limited interpretation of Alvarez’s film and is something of a disservice to the director’s overall intent and execution.  Don’t Breathe is quite simply one of the best of this particular genre, reminiscent somewhat of David Fincher’s Panic Room, but with a twist mid-way which turns our expectations and empathy upside down in exactly the way Alvarez has planned.  And it features a pretty fearsome dog into the bargain as well whose sight is most definitely not impaired.  See it and just be grateful that you never considered that career in crime.