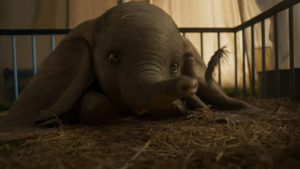 The cinematic universe of Tim Burton has frequently touched on the theme of the outsider in society; the misfit who – for some physical or personal oddity or imperfection – is at odds with the conventions of the world generally and the powers-that-be which dictate its standards.  One can see quite readily the appeal which a live remake of Walt Disney’s 1941 animated film Dumbo must have held for the director.  Based on the story by Helen Aberson and Harold Pearl, Dumbo tells of a baby elephant who is born with gargantuan ears and, initially, finds himself the subject of much ridicule and insensitive mockery.  In this new version of the tale by Burton, scripted by Ehren Kruger, the young mammal enters the world in the environs of a circus which has seen much better days.  The setting is 1919 and the Great War in Europe has recently come to an end.  A returning equestrian performer by the name of Holt Farrier (Colin Farrell) faces into a less-than promising future as he is reunited with his children Milly and Joe.  Holt has lost an arm in the conflict overseas and his wife has succumbed to Spanish flu.  The Medici Brothers’ Circus, which he rejoins, is no longer the going concern that it once was.  Proprietor Max Medici (Danny DeVito) is hoping for the show’s next big headline act by way of an Asian elephant he has recently purchased.  When ‘Mrs. Jumbo’ gives birth to her rather unusual offspring, Medici’s plans appear to be in tatters and his lot is not improved when the female elephant accidentally kills an abusive handler during Dumbo’s debut performance.  But a trickle of light duly appears as Holt’s resourceful kids discover that the baby elephant has a special gift which allows him to soar high above and not without a little spectacle. 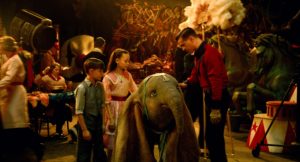 The latest offering in a crowded line of planned remakes by the House of Mouse, Dumbo is definitely not the soulless machine which some reviewers have suggested and it boasts a fine cast (who are well employed) and, of course, Tim Burton’s distinctive visual style.  There is something here for all ages even if the pacing is a tad uneven at times and the circus sequences somewhat distended.  At the core of the story of course is the youngster who is thrust into the limelight as he pines to be reunited with his mother.  The desire to be accepted and to ameliorate personal circumstances is one which Burton and Kruger are evidently very interested in.  The Farrier kids have lost their mother.  Holt has lost his wife and his co-performer in the ring.  The various members of Medici’s circus (a fairly diverse bunch as you might well imagine) fear for the future and the possible break-up of their communal family.  Medici himself will be similarly bereft if his long-standing enterprise does not turn a reasonable profit before long.  But – yes, you’ve guessed it – the lovable elephant with the floppy ears soon becomes a beacon of hope to them all. 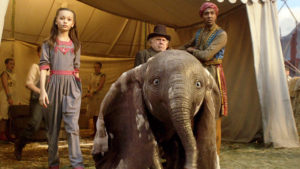 A previous acting collaborator of Burton’s turns up by way of Michael Keaton’s V.A. Vandevere and the film takes on quite an interesting aspect as he entices Medici and his troupe of performers (most especially Dumbo) to join his amusement park called Dreamland.  The allusions to Disneyland itself could scarcely be much clearer and the mindset of Vandevere is akin to Medici with regard to his perception of Dumbo as a show-stopper and a cash cow.  But the two men differ with respect to the lengths they will go to realise their dreams; in Medici’s case, Dumbo is a means to keeping his show on the road; for Vandevere, the young elephant is a potential springboard to greater success and expansion (quite tellingly his banker played by the great Alan Arkin attends the first such performance).  Keaton fits this type of unscrupulous role like a glove, but the character is generally one-dimensional and singularly without any redeeming features.  Elsewhere, another Burton regular (of more recent years) Eva Green fares fine as a French trapeze artist by the name of Colette Marchant.  Other notables in the large cast include Roshan Seth and famous American ring announcer Michael Buffer. 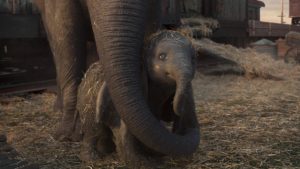 At a mere running time of 64 minutes, the 1941 version remains one of Disney’s shortest animated features and the new film is noticeably padded in places with some unnecessary exposition and elongated circus sequences.  The film’s eventual denouement is hardly the smoothest which Burton has ever committed to celluloid and there are few surprises in store for audiences as this is, after all, a Disney movie.  A common criticism which has been leveled at this re-imagining of the story is that it lacks essential heart which I don’t really agree with as I believe the filmmakers have managed to instill it with a sufficient degree of pathos and then some fun.  The cast, for the most part, are all engaging and on the side of the angels.  Farrell does well as the struggling father who is also beset by his recently-acquired physical affliction; DeVito is always wonderful as the likeable rogue; the two kids are appropriately robust and full of beans.  The appearance of Dumbo himself (with his to-be-expected anthropomorphic features) was not an issue for this reviewer as it was for others and the tone of the piece is generally agreeable even if the tempo lags somewhat in places.  It’s not a patch on the 1941 animated version (still one of Disney’s very best), but Burton and his creative collaborators have done the source material no disgrace either.  And – quite possibly – your heart might melt just a little bit when you hear those familiar strains of the unforgettable Baby Mine just one more time.