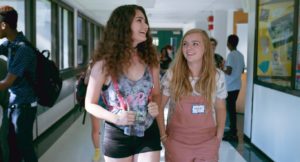 Can you recall how you felt at the beginning of your teens?  What kind of emerging emotions did that entail?  Was there a sense of transition or just sheer confusion as you started this particular phase of life?  Were there certain coping mechanisms which you relied upon to get you through?  For eighth grade student Kayla Day (Elsie Fisher) the journey through life thus far has not been without its speed bumps.  An inherently awkward young teen, Kayla immerses herself in the potential minefield that is contemporary social media.  She posts videos of herself talking to camera as she attempts to dole out advice to an imaginary audience.  In the very opening scene we learn that these pieces are not exactly racking up the numbers on YouTube.  Kayla pleads with anyone who might be watching to share her posts with friends.  What she is actually doing of course is trying to make sense of a seemingly topsy turvy world.  Nice girls like Kayla, who are mannerly and generally respectful, do not always get their just desserts.  Kayla has no friends, but she craves friendship because she understands its value and necessity.  She lives with her single Dad who tries at every juncture to reach out to her.  For a film dealing with such a formative stage of life, it is remarkable that the word Mom is not mentioned until a full 80 minutes in – at which point the story is almost done in any event.  The dangers and threats which Kayla perceives on a daily basis are not of a menacing kind, but they do engender palpable fear and general concern.  It’s hardly surprising therefore that first-time writer and director Bo Burnham drew on the anxiety he remembered when he was at this tender age. 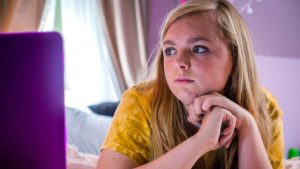 Burnham’s script and compassionate direction emphasise the gulf that can exist between the private life and the public realm even at such an early stage of life.  In her video posts, Kayla exudes an air of confidence and insight which she cannot replicate on the corridors of her school.  The narrative follows her as she negotiates the last week of middle school.  The winds of change are in the air and they are reflected in the interminable speeches which the students are subjected to and the rather bizarre drills they practice in the event of a gun spree (a sad but nonetheless correct observation on the times they live in).  When Kayla is invited to the pool party of one of the so-called cool girls in the school, she hesitates at first before accepting with some reticence.  In one of the film’s most telling visual sequences, the camera pulls away from her as she stands at a sliding glass door watching the shenanigans of her chilled-out classmates.  An image such as this might almost be a fit for Brian De Palma’s Carrie, but that’s a genre of a very different kind.  Nevertheless, the point is made by Burnham and made very well.  A social gathering such as this is sheer terror for Kayla because she has never been part of the trendy clique.  But there is hope and goodwill towards her if only she can get her head out of that phone.  A similarly unconventional boy named Gabe offers her the possibility of friendship.  Dad (Josh Hamilton) is forever seeking to promote her feeling of self-worth.  In a touching scene towards the end of the film, the two find a patch of the common ground he has been hoping for.  The two burn a time capsule which Kayla had created in the sixth grade for her future self.  Burnham’s message is simple, but of great import.  What is done in the past belongs exclusively in the past and the individual should not be weighed down by it.  Such pearls of wisdom are articulated throughout by Kayla as she posts self-help videos on topics such as putting yourself out there.  She is her own audience and we the viewer dearly hope that she will pay heed to her own advice. 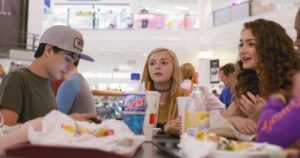 A deep-rooted feeling of empathy which Burnham has in spades for his central character shines through and – by extension – the viewer comes to share in this as well.  When – in one of the darker moments of the film – Kayla is cajoled into a game of Truth or Dare, we shudder to think where this might go or how it could potentially play out.  The implicit determination by Kayla to interact in more meaningful social contexts is welcomed by us as well.  There’s a delightful dinner date scene in the latter stages of the film which is beautifully played by the superb Fisher and supporting actor Jake Ryan as Gabe.  Just about everything in this film works because the writer/director is engaging with sensations he has encountered himself and because he has the good sense to convey them with flourishes of sensitivity and subtle humour.  Thankfully, the expression heavy-handed never comes to mind.  Recognised by both the National Board of Review and the American Film Institute as one of the best films of 2018, Eighth Grade is a coming-of-age story which deftly balances present-day observations (the effects of social media) with an individual narrative that is both touching and tangible.  Both Fisher and Burnham deserve the high praise they have earned for this and they will be in much demand.  A gentle but skillfully-told story which has resonances for anyone who ever had doubts when they were a teen.